You have to go back two years to unearth when Liverpool last suffered a Premier League defeat at Anfield.

The date was 23/04/2017, as Sam Allardyce’s Crystal Palace rocked into town and claimed a come-from-behind 2-1 victory, thanks to a brace from a certain Christian Benteke, who had been a Liverpool player the previous season.

At the time of the defeat Liverpool were left crushed, but they’ve barely looked back since, having gone a whopping 36 top-flight games unbeaten on their own-patch.

During this time frame Jurgen Klopp’s men have hammered Arsenal 4-0 and 5-1, edged out Man City in an enthralling seven-goal thriller, and delivered the 3-1 win earlier this season that put an end to Jose Mourinho’s Man Utd tenure.

How does Liverpool’s tally compare to other clubs?

Only two teams have ever put together a lengthier unbeaten home run in the Premier League era.

Man City enjoyed a 37-game unbeaten streak at the Etihad between 2010 and 2012 under Roberto Mancini, who led the Citizens to 2011/12 Premier League glory for the first time in the club’s history.

Should Liverpool avoid defeat against Tottenham on Sunday they will draw level with City on 37 undefeated home games.

Meanwhile, Liverpool’s prior best was a 31 game unbeaten tally back in 2007-09 when Rafa Benitez was at the helm.

There’s a clear winner in this category...

Step forward Chelsea, who quite remarkably conjured up a titanic 86 game unbeaten run at Stamford Bridge between 2004 and 2008, with no less than four different Blues bosses playing their part in this feat.

The streak began in March 2004 when Claudio Ranieri’s Chelsea beat Fulham - with whom he would later manage. A further five more undefeated matches were collected through to the summer when Jose Mourinho took charge and added another 60 games to propel the tally to 66 - incredibly, the Portuguese coach didn’t lose a single league home game at the Bridge in his first spell at the helm.

Mourinho departed in September 2007 but the run continued under Avram Grant who added 16 unbeaten games, then Luiz Felipe Scolari who could only deliver two wins and two draws, before the gargantuan run came to a close against none other than Liverpool, who registered a 1-0 win in October 2008.

It’s difficult to see this outstanding record, which spread over five seasons, ever being topped...but you never know. 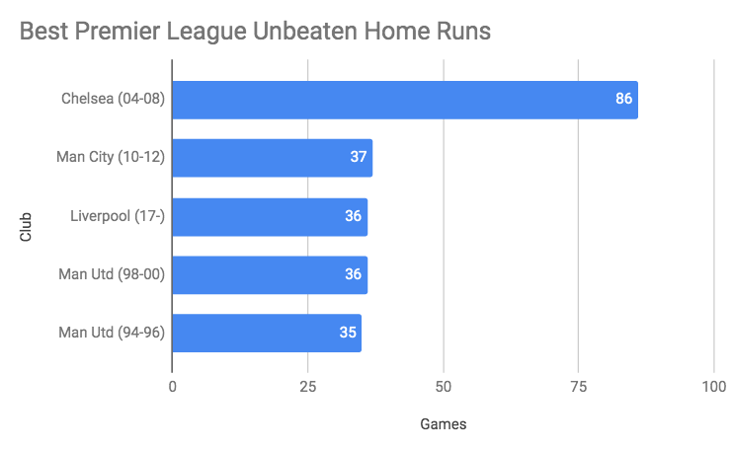