“Decisions make your career, and I made a f**king stupid one,” Jackson Hastings said of the incident which led to him being released by Manly Sea Eagles at the age of 22 and left his NRL future in tatters.

Hastings had broken curfew and ended up having an altercation with Manly skipper Daly Cherry-Evans. Having already had his attitude questioned prior to the high-profile bust-up, Hastings was demoted to the reserve grade Blacktown Workers and subsequently released.

“We got beat and we weren’t allowed to go out,” he told the Locker Room soon after the 2018 incident. “To be honest, the worst thing we did was break curfew and it’s something that I look back on and it’s just so stupid.

“We wouldn’t even be sitting here talking about it if I just didn’t break curfew. It just pisses me off that I made such a dumb decision.

“We went out to all hours of the morning and then the incident took place,” he said. “I knew I’d f***ed up the next morning. I knew the decision that I’d made was terrible.

“There was no fight. What’s a fight? A fight is when two people punch the s*** out of each other. That never happened.

His reputation in tatters and NRL prospects seemingly ruined, he opened the door to a move to the Betfred Super League in the hope that his career could be rescued from the flames.

He wanted to a get-out clause in any deal in England though, believing that a speedy return to Australia could be achieved.

“I had a chance to go to Huddersfield with Simon Woolford at the start,” he told Sunday Night with Matty Johns recently. “But they wouldn’t just give me one year with a player option to come home if something happened, and then Salford came knocking.

“Ian Blease and Ian Watson got on the phone to me straight away and the eight weeks was all I went over there for at the start.”

Those first eight weeks with the struggling Red Devils showed just what Hastings was made of, with director of rugby Blease and head coach Watson being rewarded for taking a chance on the firebrand half-back. 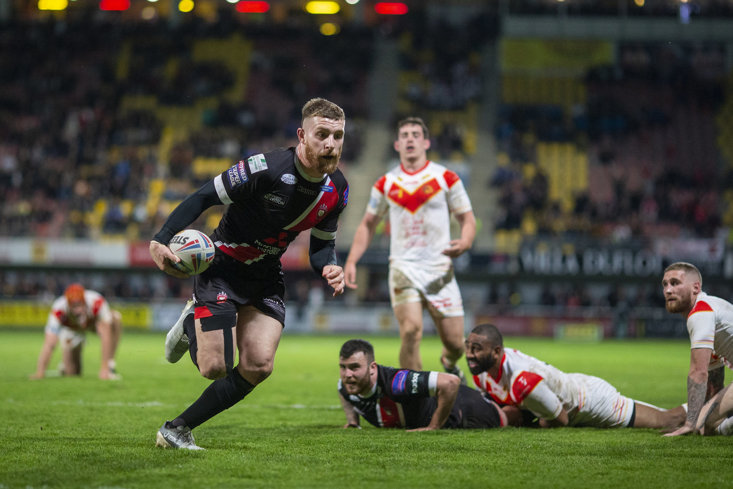 He signed at a time when Salford were destined for the middle-eight qualifiers, needing a healthy run of form to avoid relegation. But Hastings scored five tries and had a hand in many more as Salford won six of their last eight fixtures to finish top of the play-off section and maintain their top-flight status.

Hastings explained to Matty Johns just how big those two months were.

“After the eight weeks, the people at the club treated me like a rock star and I couldn’t turn my back on them.

“I chose to stay there for another year in 2019. We went from favourites to go down and we went on to make the Grand Final against St Helens and got to play at Old Trafford in front of 65,000 people.”

Having been the driving force behind Salford’s remarkable turnaround in fortunes, Hastings was named the Super League Man of Steel and won the attention of Wigan Warriors.

His switch to Wigan saw him reach another Grand Final in 2020, and by April 2021 he had been snapped up by Wests Tigers to return to the NRL for the 2022 season. His redemption was almost complete.

He could have had a better start to lift back in the Australian first grade. After back-to-back defeats to open the season he was handed a three-match ban for a dangerous throw in the Round 2 loss to Newcastle Knights. In his absence, the Tigers poor run stretched to 0 and 5.

But on Monday he wrote a brand new chapter in his comeback story. With five seconds left on the clock against the Parramatta Eels and the scores locked at 20-20, Hastings received the ball 38 metres out.

To those who had missed his three-and-a-half years in England, there might have been little expectation. But for the fans who had seen Hastings respond to adversity with a dazzling Super League spell, there was no doubt what was about to follow.

A perfectly-struck drop-goal ended the contest. Wests had their long-awaited first win of the season, sending coach Michael Maguire into raptures in the stands as Hastings was buried under a mob of joyous Tigers team-mates.

Jackson Hastings is back in the NRL with a bang. And he will be desperate to ensure that his Super League renaissance paves the way to more scenes like Monday’s.