Football
News
How On Earth Did This Leeds United Star Not Make The EFL Championship Team Of The Season?
Chris Knight
18:59, 30 Mar 2019

If Leeds United are to be promoted from the Championship to the Premier League this season, it is fair to assume that they are going to do things the hard way. Marcelo Bielsa's men won a five-goal thriller 3-2 against Millwall on Saturday afternoon and one man played a starring role.

Pablo Hernandez took centre stage at Elland Road as he scored the first and last Leeds' goals and in doing so he helped his team twice come from behind to claim three points.

The victory lifted Leeds up into the second automatic promotion place in the Championship table as they moved two points clear of Sheffield United, who were on the receiving end of a stunning 3-2 defeat at the hands of play-off hopefuls Bristol City.

It was a pleasing turn of results for Leeds as they reaffirmed their promotion credentials. They had looked genuine Premier League material during a rip-snorting start to life under Bielsa but the wheels threatened to come off after Christmas as they had lost six times in the Championship since Boxing Day, winning eight and drawing one in the process.

In truth, Leeds' own downturn in form during the past three months or so has been mirrored by the relative struggles of Hernandez, who had only scored three goals and laid on one assist in the league in 2019 before the Spanish wizard stole the show on Saturday.

Looking at the season as a whole, Hernandez has been a revelation, flourishing in an attacking midfield role and on the wing when required. He has been a key component of Bielsa'a game plan, scoring 12 goals and laying on 11 assists in 32 league appearances so far this season.

Those returns should ensure he walks into any team in the second tier of English football and yet he was a curious absentee from the EFL's Championship team of the season, which was announced last week.

Leeds fans could be forgiven for scratching their heads over the omission of one of their star players, particularly as only Lionel Messi and Eden Hazard had reached double-figures for both goals scored and assists in Europe's top-five leagues when the EFL team was announced.

Hernandez may be 33 years of age but he is enjoying the most productive campaign of his career and it seems remarkable that he didn't make the team of the season, with the likes of Oliver Norwood, Jarrod Bowen and Kalvin Phillips selected ahead of him.

For Bielsa and co., they will just be hoping Hernandez can keep producing match-winning performances as Leeds bid to return to the Premier League for the first time since they were relegated from the top-flight in 2004. 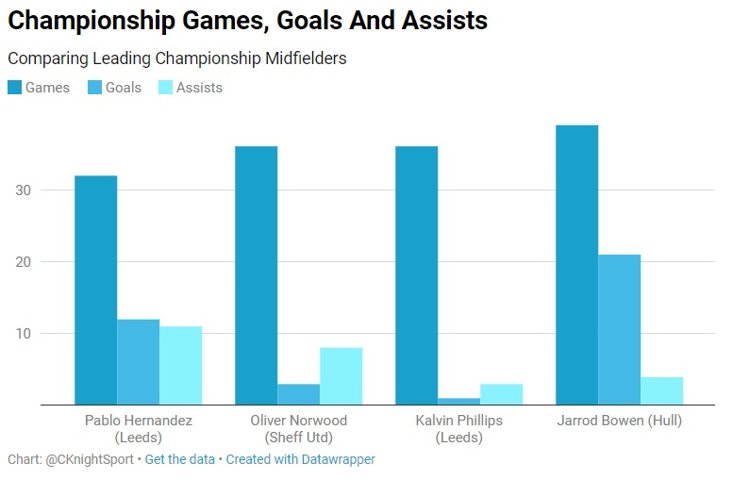