In the fast-moving world of new season football kit releases, the trend of shirts being “inspired” by things is a constant.

Today, Everton launched their new home kit for 2019/20 and almost inevitably, it’s been inspired by something - in this case their famous Goodison Park home. As one of the most traditional and atmospheric grounds in the Premier League, there are rich pickings for the designers and they’ve decided to focus on the architecture of Archibald Leitch.

Very much the leader in his field between 1899 and 1939, evidence of Leitch’s work can be seen all over the country. With a penchant for mock tudor, Leitch was in demand for famous venues including Anfield, Old Trafford and Ibrox.

His legacy lives on at grounds like Goodison though much of his most famous work has been wiped out as a result of ground improvements or stadiums being demolished.

In 1907,  Leitch designed a new double-decker Goodison Road stand. The Scotsman would also design the next two new stands of the ground: both two-tiered, the first was the new Bullens Road stand in 1926 and the second the new Gwladys Street End in 1938 which featured the now iconic crisscrossed latticework. The crisscross would become Leitch’s trademark.

Everton’s new shirt features a girder effect across the chest which Umbro describes as a “bold new design twist” and “iconic”. Everton shirts have rarely strayed away from a traditional all royal blue design with only a subtle graphic, sublimation or trim being added here and there.

As a brand, Umbro are enjoying something of a resurgence. They now have the kit contracts for several Premier League and Bundesliga teams and their recent work for West Ham won plenty of admirers. As one of the most famous football brands they have - quite rightly - made the most of their impressive back catalogue.

Alan McTavish, commercial director at Everton, said: “For the 2019-20 season we are combining Umbro’s innovative kit manufacturing techniques and performance enhancing material with a design that encompasses both our proud history and our ambitions for the future.

“The crisscross Archibald Leitch girders are synonymous with any match day at Goodison Park. They are a symbol of the unwavering support and strength of our fanbase. Incorporating the design on our shirt for 2019-20 connects the passion of our players, our fans and the Club as a whole, as we move into the new season as an ambitious and forward-looking club.”

Robin Dunn, Head of Performance at Umbro UK said “We knew we wanted to do something different, distinctive and bold with the man body of the jersey for the 19/20 season, and we really wanted to connect the fans and players through the iconic stadium architecture and the club’s proud history with Umbro as a brand, 2 things that really feed well into our ‘Built to Last theme’ for the kit launch.

“We hope the new 19/20 strip will strike a chord with the Goodison faithful and fans further afield to create new and lasting memories both on and off the pitch.”

To celebrate the launch of the new strip, Everton and Umbro have produced St. Domingo, a limited edition shirtzine based on the Built to Last theme which includes exclusive interviews, features and an insight into the design of the shirt. 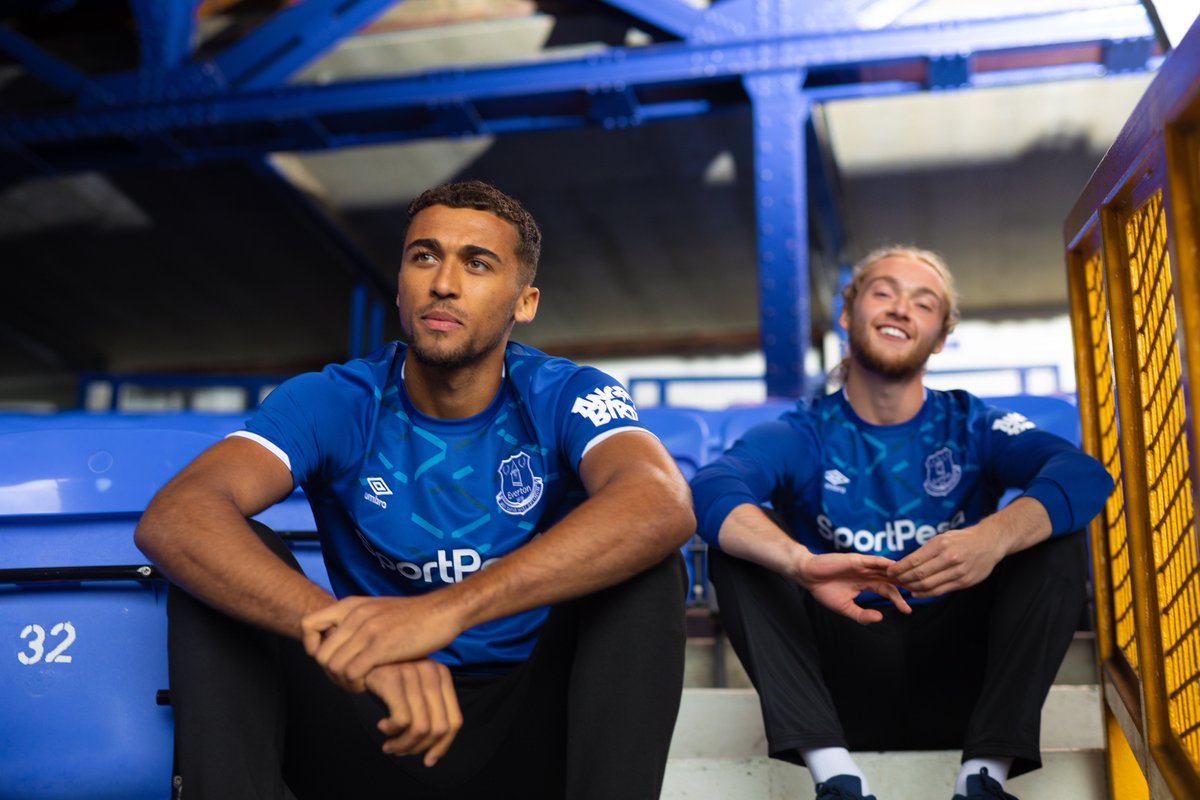 28
155
x
Suggested Searches:
The Sportsman
Manchester United
Liverpool
Manchester City
Premier League
More
football
Relentless England Give Another Second Half Masterclass In Final...
For the second time in a week, a dominant second half performance showed the strength of England’s [ ... ]
football
Five South American SPFL Stars Whose Footsteps Celtic New Boy...
On Thursday morning, Celtic confirmed the signing of Argentinian left-back Alexandro Bernabei from Club [ ... ]
football
LIVE Transfer News: Lukaku Completes Inter Milan Return
Good morning and welcome to The Sportsman's LIVE transfer blog, where we will be bringing you all [ ... ]
football
Carson Pickett Becomes First Player With Limb Difference To...
Carson Pickett has made history, becoming the first limb difference player to play for the United States [ ... ]
football
Happy Birthday Troy Deeney: Here Are The Most Memorable Championship...
Iconic EFL Championship striker Troy Deeney turns 34 today and everyone remembers his dramatic goal [ ... ]
football
Style And Substance: The Lowdown On Manchester United New Boy...
While Manchester United fans were busy scouring the internet for crumbs of information on Frenkie de [ ... ]
football
Online Hate Crimes Will Now Result In Football Banning Orders...
People who are convicted of football-related online hate crime can now receive banning orders that prevent [ ... ]
football
LIVE Transfer News: De Jong, Raphinha & More
Good morning and welcome to The Sportsman's LIVE transfer blog, where we will have you covered for [ ... ]
football
Football Docs To Binge On Amazon Prime Before All Or Nothing:...
The much-anticipated All or Nothing: Arsenal documentary finally has a release date! The story of the [ ... ]
football
From Stadium MK To Wembley: Our Women's Euro 2022 Stadium Guide
Euro 2022 is edging closer and England is all set to welcome fans from across the continent to witness [ ... ]
football
Newcastle United Finally Get Their Man As Sven Botman Signs
Newcastle United have confirmed the signing of Dutch centre-back Sven Botman from Lille for an undisclosed [ ... ]
football
Chelsea Close To £55M Deal For Leeds United's Raphinha
It’s the transfer window that just keeps giving!  Chelsea are now reportedly close to agreeing [ ... ]
football
Happy Birthday Kevin De Bruyne: The City Man Could Be In For...
Kevin De Bruyne turns 31 today and while he can expect no shortage of presents, he is a man with more [ ... ]
football
Forget Transfers, Here Are The Players That Could Improve Their...
The transfer window offers a twice-a-year opportunity for clubs to re-jig their squads, shift the deadwood [ ... ]
football
Success Or Failure? Every EPL Club's Most Expensive 2021-22...
The summer transfer window is well underway and fans across the Premier League are demanding that their [ ... ]
football
Netherlands Striker Miedema Feels Euro 2022 Can ''Put Women's...
Netherlands international Vivianne Miedema believes that this summer’s Euro 2022 in England is [ ... ]
football
LIVE Transfer News: Raphinha, Sven Botman & More
Good morning and welcome to The Sportsman's LIVE transfer blog, where we will have you covered for [ ... ]
football
Richarlison Over Antony: The Transfers Man United Need To Do...
With Manchester United’s summer business continuing to revolve around Frenkie de Jong, discussion [ ... ]
football
How Arsenal Can Get The Best Out Of Gabriel Jesus As £45m Deal...
Arsenal are closing in on the signing striker Gabriel Jesus from Manchester City in a deal [ ... ]
football
Four Number 17s Sadio Mane Will Look To Live Up To At Bayern...
Sadio Mane is embarking on a new adventure with Bayern Munich, having ended his six-year love affair [ ... ]
football
Arsenal Keeper Matt Turner's Journey To The Prem Has Had Many...
It’s all systems go at the Emirates Stadium with Arsenal acting swiftly to bolster their squad [ ... ]
football
£170M! The Long-Term Cost Of Chelsea's Horror Romelu Lukaku...
Romelu Lukaku’s loan return to Inter Milan is imminent and just one year after Chelsea paid £97.5m [ ... ]
football
The Third Best Stadium In Glasgow, Hampden Park Desperately...
From the 10-goal thriller between Real Madrid and Eintracht Frankfurt in the 1960 European cup final [ ... ]
football
Premier League Meets Primeira Liga: Why English Clubs Are Raiding...
As Premier League clubs frantically try to assemble squads that will improve their lot this season, [ ... ]
football
Transfer News: Gabriel Jesus To Complete Arsenal Switch
The latest news from the football world sees Manchester City and Arsenal linking up once again, this [ ... ]
football
Burnley Manager Vincent Kompany Talks Transition, Transfers...
Vincent Kompany was a fine footballer – but can he cut the mustard as a manager? The former [ ... ]
football
Clowes’ Bid Accepted For Derby County As Rosenior Is Named Interim...
It’s been a torrid season for Derby County fans, ending in relegation to League One, but [ ... ]
football
Man United, Chelsea And Newcastle Linked With Neymar Ahead Of...
Following reports that Neymar is considering leaving PSG this summer, it is now being claimed that only [ ... ]
football
LIVE Transfer News: Chelsea Chasing Sterling & De Ligt
The final day before the Premier League clubs begin their pre-season training and there's [ ... ]
football
European Champions On 10 Days Notice: 30 Years On From Denmark’s...
“Our sponsors were not prepared for us to go, so what we had was the Under-21s kit. When you look [ ... ]