Football
News
Who makes our combined team from the two Championship play-off finalists?
Simon Lillicrap
09:00, 29 May 2022

So we have arrived at the richest game in football. By Sunday night, either Carlos Corberan’s Huddersfield Town will have secured an unlikely Premier League return, or Nottingham Forest’s 23-year absence from the top flight will have ended.

Ahead of the biggest game the Football League has to offer, we’ve put together a combined XI from the teams of Huddersfield and Forest. Given these two finished 3rd and 4th in the league, with only two points separating them, it's a worthy final - but it also made our life incredibly tough. Let’s get into it.

Brice Samba may have won the plaudits for his penalty heroics in the play-off semi-final against Sheffield United, but no keeper in the Championship has been better than Nicholls this term.  In the regular league season he made more saves (138) than any other shotstopper in England's second tier and kept 18 clean sheets with the third best save success rate (76.2%) in the division.

An obvious candidate. The Middlesbrough loanee has sparkled this season under Steve Cooper and is a huge attacking outlet for Forest having completed more dribbles (76) than any other Championship defender. No wonder Europe’s top clubs are queuing up for him this summer.

Deciding which two Forest centre-backs would slot into this team was incredibly tough, but in the end, it is Steve Cook who misses out due to his lack of appearances, having only joined in January. Worrall has been a mainstay for Forest this term, and completed 81% of his attempted tackles.

The left-footer has been a solid option on the ball in Forest’s back three this term, but he’ll have to fill in at the heart of our defence here. With two goals and three assists to his name, he has immense quality on the ball, while his performances this term have earned him a call-up to the Scotland squad for the first time.

The 19-year-old Chelsea loanee has been outrageously good this term and is a key reason why Huddersfield have made it to this stage. Having let both Marc Guehi and Fikayo Tomori walk out the door, it would be a travesty if this huge talent wasn’t involved with the Chelsea first-term next season. The England U21 international won’t be far off Gareth Southgate’s plans in the future.

•
@louorns
Levi Colwill with a very impressive first season on loan at Huddersfield — left footed centre back that's aerially dominant, wins his individual battles and can progress the ball. No reason why he can't do what Guehi did and be the best player at a Premier League club 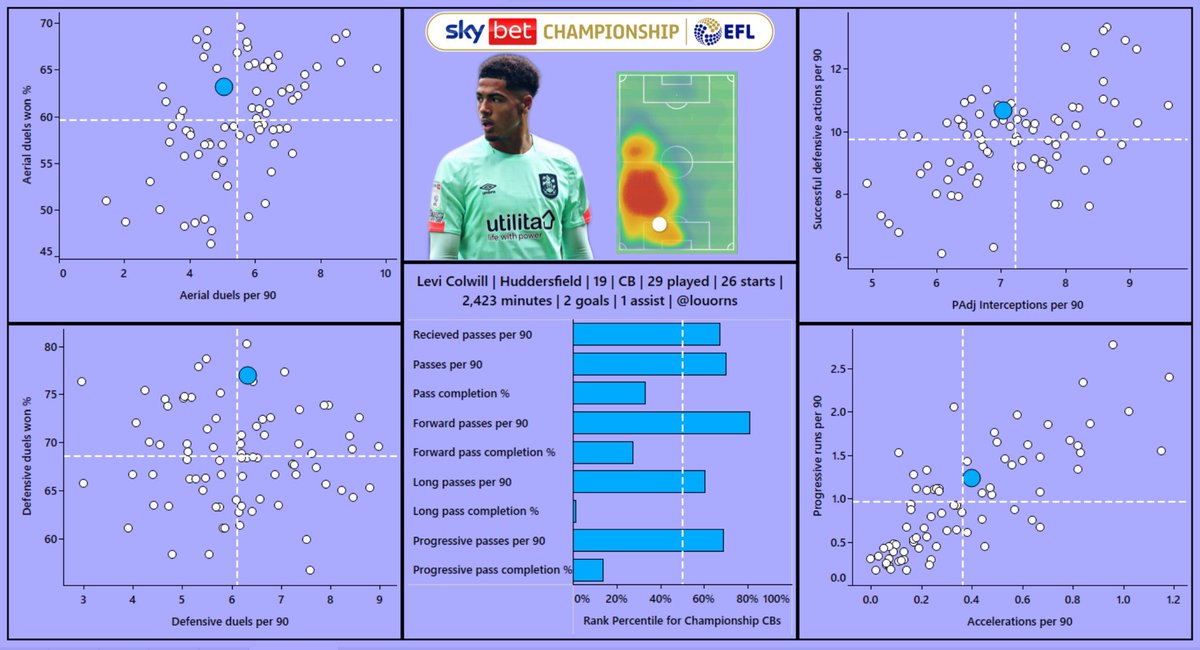 Eight assists and six goals from left wing-back is a brilliant return for Toffolo, who has really found his confidence since joining Huddersfield in 2020. Now part of a Corberan system that lets him roam forward, his attacking returns and consistency this season earns him a spot in this side.

My word, what a footballer Lewis O’Brien is. These two central midfielders are going to have to get through a fair bit of work, but at just 23, O’Brien has proven himself to be one of the finest in the division. His energy and work-rate are both phenomenal, while he gives this Huddersfield midfield the creativity and drive it needs. He should be playing Premier League football next term even if the result doesn’t go the Terriers way on Sunday.

This was a tough one. The Manchester United loanee has been tidy this season alongside the impressive Ryan Yates, but Garner just edges this one. He’s highly confident on the ball under pressure, clever in possession and has been able to deal with the physicality of the division.  This week he was rewarded with a call-up to the England U21s, and will be hoping to catch the eye of Erik Ten Hag over summer.

The man that scored in both legs of the play-off semi-final, and the homegrown talent that has fired them to the brink of the Premier League. Rejecting Brentford’s advances in January for Johnson looks like it could be the most sensible decision Forest have ever made. 19 goals and nine assists later, Wembley awaits.

Callum Castel-Nuovo
@callumcasteln
19 goals
10 assists
What a season he's having. Happy 21st birthday to one of our own, Brennan Johnson 🥳💫
#NFFC 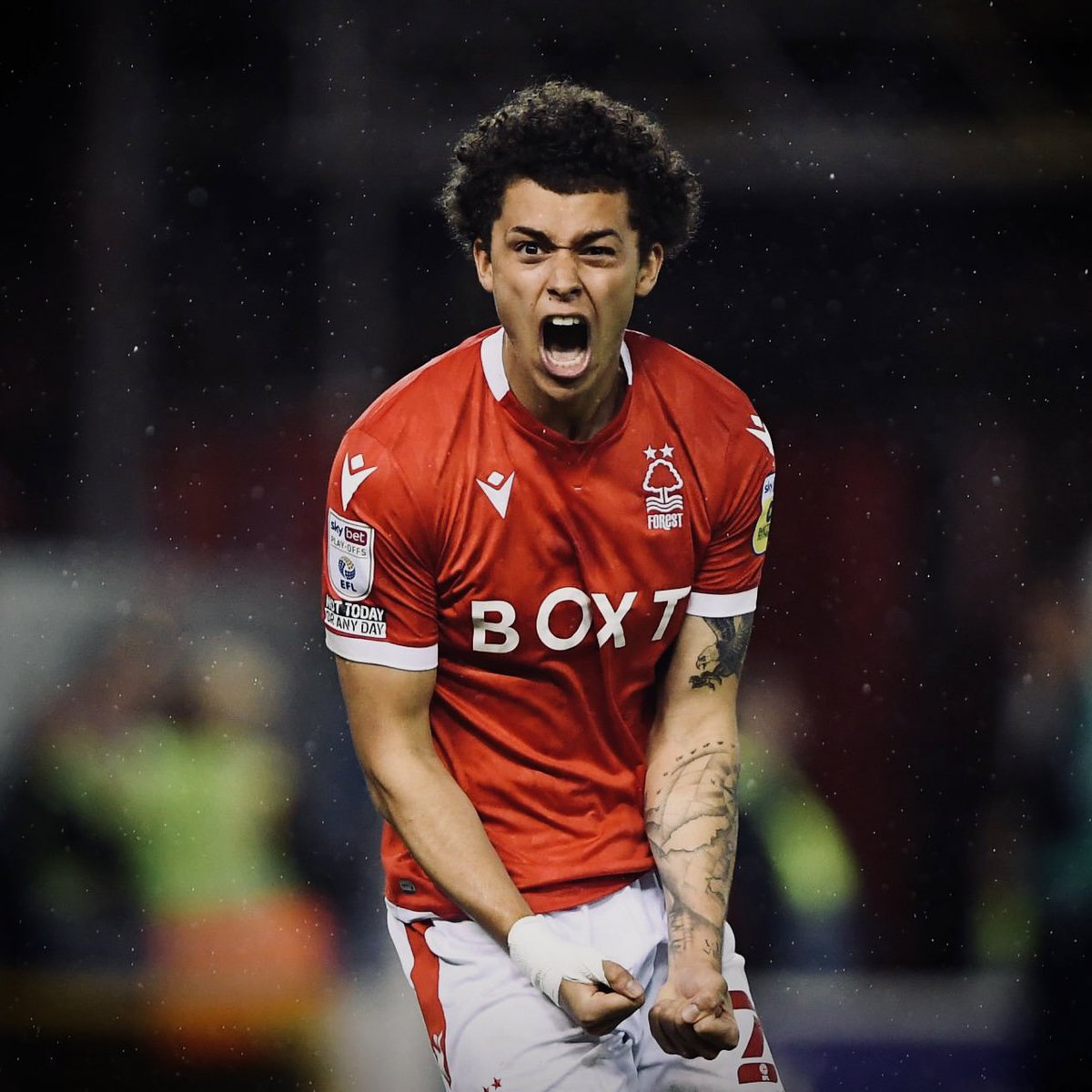 The striker position was tough to choose. Given Sam Surridge has finished the season strongly and Danny Ward has been excellent this season for Town, Davis may seem like a slightly left-field choice. However, since joining on loan in January, the Aston Villa forward has been huge for Forest, with his physical attributes making him the standout striker from both of these teams.

Just imagine this front three. Sorba Thomas got the key assist from a free-kick for Jordan Rhodes’ winner vs Luton, but it is his ball-carrying ability that has shone this term. At just 23, having only joined from Boreham Wood in the summer, he has been the best signing of the season by some distance - and will be hopeful to crown his debut year with the fairytale ending under the arch. He’s played almost everywhere this term, including at wing-back, but can produce for us on the left wing.