Football
News
We spoke to Buxton FC assistant manager Tommy Miller ahead of his return to Ipswich Town in the FA Cup on Sunday
Neil Goulding
08:00, 27 Nov 2022

Miller, now the assistant manager at part-time Buxton, will face his former club in a mouth-watering FA Cup second-round showdown on Sunday (5pm).

It’s the second successive season the Bucks have reached the second round - and would be the first time since 1952 they got to the third round if they can win and create history.

And while the Tractor Boys midfield favourite is understandably looking forward to returning to Portman Road, he is also firmly focused on masterminding an FA Cup giant-killing with the Vanarama National League North outfit, a club three divisions and a staggering 108 places below the League One side in the football pyramid.

“It’s like going back home for me,” said County Durham-born Miller, who played 214 games and scored 47 goals for the Tractor Boys during three spells across five seasons with the club.

“I hadn’t been to the club since I left in 2009 until I recently went to watch Ipswich against Derby.

“It’s a proper family club, I loved my time there. I’ll always have so many fond memories.

“(Ipswich boss) Kieran McKenna (who used to work under Jose Mourinho) is doing a great job and hopefully he can get them promoted to the Championship – and hopefully back to the Premiership one day.

“But this is what the FA Cup is all about, it’s a great chance to showcase their talent and to try and cause a massive shock. 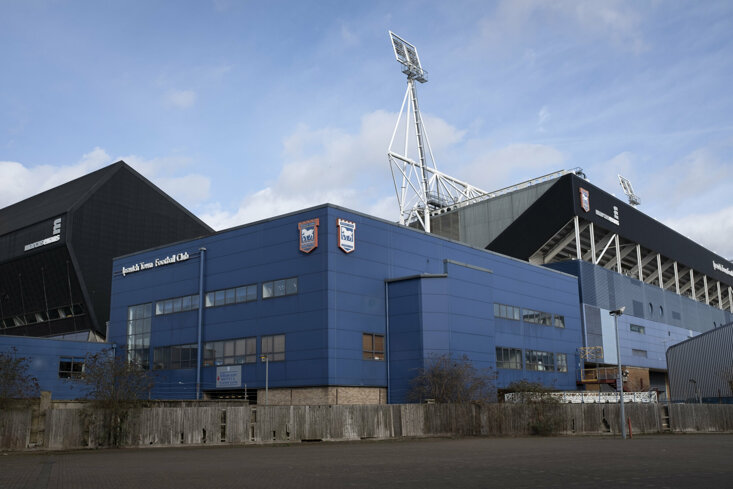 “I used to travel down to Ipswich as a 15-year-old schoolboy, get the train down every other Saturday night, stay with a local family, play for the club on Sunday and then travel back ready for school the next day,” recalled Miller.

“I used to play in the same team as (former England, Newcastle and Ipswich midfielder) Kieron Dyer, but I got released when I was 16 because I was too small. I was only 5ft 2” and very scrawny.

“But I went to Hartlepool and then all of a sudden Ipswich came in to buy me, which was a bit surreal.

“George Burley signed me (for £750,000) and I had a taste of European football (in the UEFA Cup). I made my debut against Russian side Torpedo Moscow, which was live on the BBC.

“It’s crazy really. I’ve played in the Premier League and the Championship, but I was fortunate with injuries which helped.”

After finally hanging up his boots in 2019, it was at National League North side Spennymoor that Miller first ventured into management.

And then Buxton manager Jamie Vermiglio gave him the call to come and help him in Derbyshire, with Buxton perhaps, respectively, recognised more for its bottled Peak District water than for its footballing greatness.

“It’s a massive game for the club, probably the biggest one in Buxton’s history,” admitted Miller, although the fixture has sadly been overlooked for BBC coverage.

“We’re really looking forward to it. It’s going to be a good day for the club.

“It’s great for our chairman (David Hopkins), who has put in a lot of money over the years. And obviously for the players and the supporters as well.

“I was delighted with the draw. I would have liked Ipswich in the last round, but unfortunately we didn’t get them.

“We had a tough game against Merthyr (Town), instead, and they can count themselves a bit unlucky because on the day they had some good chances.

“But we managed to get through and then you’re thinking you want Ipswich, Derby County or Sheffield Wednesday – three massive teams from League One.

“However, to get Ipswich was a real bonus for myself, given my history with the club.

“We’ve got nothing to lose. We’re a part-time club in the National League North.

“I think there’s only five teams who are full-time in our league – and being full-time makes a big difference.

“But being part-time we’re going to go there and enjoy the day. We’ve got nothing to lose because Ipswich are massive favourites.

“They should go through, but you never know in the cup. We’re going to enjoy the day and see where it takes us.”

Buxton players have already been picking Miller’s brains for what they can expect at Portman Road.

“There’s a few of the players have been asking lots of questions,” said Miller.

“They want to know what the stadium is like and what the pitch is like but, I’m sure when they turn up, they will be bowled over by the side of the ground.

“It’s not what they’re used to and I’m sure there’ll be a few nerves before kick-off, but that’s normal. Hopefully we’ll give a good account of ourselves.”

Buxton are 14/1 to beat Ipswich with Betfred*