For the entirety of Paul Pogba’s second tenure at Manchester United, questions have been asked over how to unlock this mercurial talent. Incredible displays for France, including scooping a World Cup in 2018, have only increased the chatter around the midfielder’s mixed United displays. After notching another assist on Sunday against Southampton, in a game that sees his side tie Arsenal’s Invincibles with a record 27-game unbeaten Premier League run, Pogba finally seems to be displaying the form expected of him when he moved from Juventus in 2016.

Whether motivated by a potential move to Paris Saint-Germain next summer, refreshed by a new left-sided berth linking with the resurgent Luke Shaw, or simply sick of the constant dissection of his fluctuating performances, Pogba has found the motivation to make this season his own. His determination to keep a loose Bruno Fernandes cross alive, slaloming through Southampton defenders to find Mason Greenwood, led to United’s equaliser on a challenging afternoon. Pogba has often been accused of going missing when the chips are down, but he was a key motivator for United to get a 1-1 draw out of their trip to St Mary’s.

United enjoyed the better of the early exchanges. Outside of a James Ward-Prowse free-kick parried around the post by David De Gea in the first minute, Ole Gunnar Solskjaer’s men looked most likely to score. Southampton committed a number of fouls in wide areas, leading to some dangerous moments from free-kicks. First, Bruno Fernandes whipped in a right-side dead ball that eventually fell to Anthony Martial, who saw a shot cleared off the line by Mohammed Salisu. Then a pair of Luke Shaw deliveries caused difficulties in the Saints defence. Salisu was on hand once again when the left back’s ball reached Pogba, who had his shot blocked by the Ghanaian. The pair combined a minute later when another Shaw centre was headed over the bar by the Frenchman. 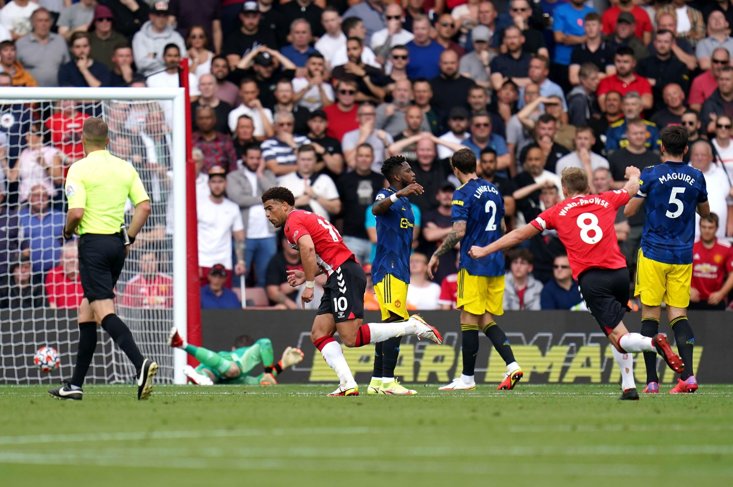 United were left to rue these squandered chances when Fernandes was forcefully dispossessed by Jack Stephens on the half-hour mark. The defender squared to Moussa Djenepo, who played in Adam Armstrong for a deft flick to Che Adams. The former Birmingham City man launched a shot between Harry Maguire and Fred, with it deflecting off the latter for an own goal by the Brazilian. The Red Devils were apoplectic, Fernandes in particular, citing a foul by Stephens in the build-up. With VAR taking a less granular approach this season, Southampton benefited from the leniency and the goal was given.

Much of United’s play after the goal was sloppy, as they struggled to find the rhythm they had enjoyed early on. Fernandes tried his best to drive the team on, carving out a chance for Greenwood, who failed to direct his shot. Fred continued his unfortunate afternoon with some wayward passing and careless possession, typified by his tame submission to Romain Perraud which led to a Saints corner.

After the half-time break Ralph Hasenhüttl fortified his defence by replacing Theo Walcott with Jan Bednarek, who slotted in on the right side of a back five. Surprisingly, considering the firepower available to Solskjaer, United emerged unchanged despite being behind. 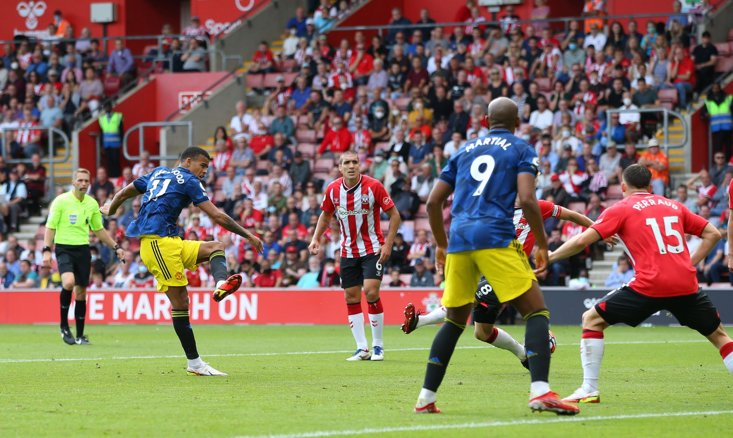 The dynamic Adam Armstrong tested De Gea with a cross-cum-shot after the break, and he would later draw a potentially match-saving stop from the Spaniard. After scoring last week, the summer arrival from Blackburn Rovers already looks like a vital addition to Hassenhuttl’s side. The visitors also threatened, with Pogba showing signs of the impact he’d come to have when Salisu once again blocked a shot from the midfielder. Half-hearted appeals for handball were rightfully waved away.

An elegant exchange with Fernandes brought about United’s goal, with Pogba’s single-mindedness presenting Greenwood with the ideal assist. As United chased the three points, Pogba combined with Shaw on the left-hand side to provide a consistent threat. The understanding between the pair has been a vital part of the improvement in the form of both players. Pogba and Shaw combined to play in substitute Jadon Sancho on the hour, but he ran the ball too wide and the move broke down. The former Le Havre youth product would drag five Southampton players in his wake as he attempted to win the game on his own, coming close but dragging his shot wide.

United’s momentum would peter out, with Southampton getting the better of the late flurries. Solskjaer will be left to rue missed opportunities from set pieces, and some very casual defending which he will hope Raphael Varane can remedy when fit. The Norwegian can take solace from the fact Pogba appears to be relishing his football. The continuation of this rich vein of form will be vital to United’s fortunes this season.