Football
News
The Reds are operating as a business first and a football club second
Alex Keble
09:25, 30 Sep 2019

Perhaps what’s most damning about Manchester United’s poor start to the season is that they have yet to play any of the Premier League’s big-hitters. That will change on Monday night when Arsenal arrive at Old Trafford.

In United's last league fixture West Ham United didn’t really get into anything like top gear but deservedly won 2-0. Man Utd were just worse – are worse, in fact; their starting 11 last weekend was weaker than England’s 10th best club. How on earth has it come to this?

The factors are many, of course, but the simple answer is that United are in utter disarray; this is a business first and a football club second, and on every non-financial measure of quality they are failing from top to bottom, from the boardroom to the pitch.

What faces the club between now and next May isn’t just casual drifting. It isn’t just missing out on the top six. It is a potential collapse which could make last season’s crisis look minor by comparison. Ultimately United won’t end the season lower than mid-table, but it is perfectly conceivable there will be a moment this year – as happened with Chelsea in 2015-16 - when the media might tentatively ask: “Are Manchester United in a relegation battle?” The parallels with Jose Mourinho’s final season at Stamford Bridge are there, after all.

If this sounds dramatic, take another look at the players in that squad. Imagine the first 11 put out at West Ham instead played for a relegation candidate: Scott McTominay, Andreas Pereira, Nemanja Matic, Ashley Young, Daniel James. Three of that quintet still have a long way to go to prove they can deliver the consistency to play for a top-six club, while Matic and Young are way past the point at which they regularly provided the kind of performances which would be passable for a Champions League challenger.

The situation isn’t helped, of course, by the fact Ole Gunnar Solskjaer currently appears to be out of his depth. He spent the summer attempting to re-sculpt the club in the image of United of the 1990s, despite football tactics being unrecognisable in 2019 to his golden age as a player. Youth and speed are the buzzwords for Solskjaer, with little sign of a coherent tactical strategy beyond that basic mantra thus far.

In a game now defined by possession-versus-counter as the wealth divide grows, and where high pressing and complex high-tempo passing is the dominant mode of attack, Solskjaer’s rebranding of United makes no sense at all. Opponents need only sit deep to limit the space required for United’s pace to be meaningful. The inadequacy of this tactic is underlined by the Reds’ attacking return of late with 12 goals in their last 13 games in all competitions and only one multi-goal performance in that time, against a raw Chelsea outfit on the opening day of the season. 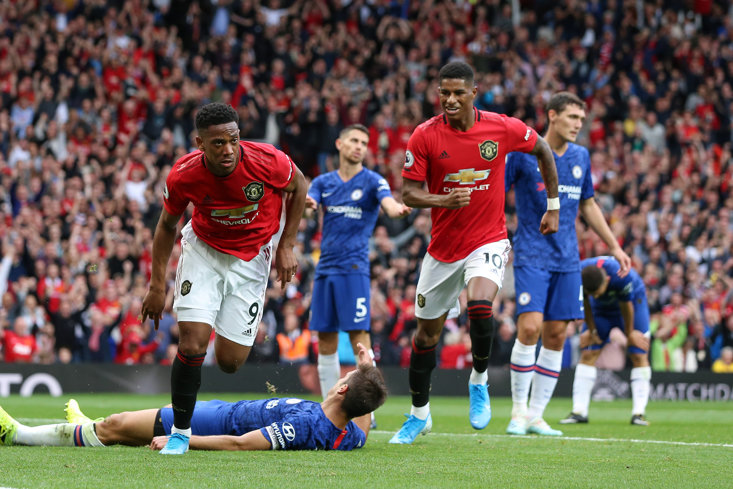 Not that Solskjaer is solely to blame for Man Utd’s crisis, of course. Ed Woodward and the rest of the board have an extremely poor record over the last six years, from employing David Moyes in the first place to wasting money sporadically, at times backing managers and at others deciding better of it. Lurching between tactical styles – Moyes, Louis van Gaal, Mourinho and Solskjaer could scarcely be more different – has left them with a disorganised and disorientated squad.

Then again, from the Glazers’ perspective Woodward isn’t failing at all. United is continuing to succeed as a business despite their on-field troubles. Regardless of not qualifying for the Champions League Man Utd’s profit margins are steady. Where is the motivation to fix the footballing ills when the entity is still making money?

United are arguably the club that best highlight the evils of modern elite football. The Glazers’ acquisition via a loan secured against the club’s value has saddled United with debt since 2005. In interest payments and dividends to shareholders, the Glazers have made £800 million since the takeover.

There is no great conspiracy here, only a seemingly endless series of poor footballing decisions from Woodward, whose errors go unquestioned for as long as profits remain healthy. There is no clear benefit to the Glazers in copying the Manchester City model of investing in long-term infrastructure. For a behemoth like Man Utd, whose revenue streams are only loosely connected to team performance, the difference between competing for the title and competing for fourth is not economically valuable. Profitable stasis makes more business sense.

And yet the solution to their current malaise isn’t particularly complicated. Mauricio Pochettino would surely be available if Woodward allowed the Spurs manager to help hire a director of football, immediately imprinting the club with a coherent vision.

But Woodward has been short of astute footballing decisions since taking his current role, so it wouldn’t be wise to back him to make the right choice at the point Solskjaer leaves. When that happens is anyone’s guess, although it is bordering on probable that, in the short-term, United will sink even lower.

Man Utd v Arsenal is a fixture synonymous with the great Alex Ferguson teams, and so Monday’s fixture might only emphasise how far United have fallen. Incredibly, the club might not have bottomed out just yet, with the best teams in the division still to play. And with each negative result, opponents will be ever more fearless.

When Mourinho was sacked by Chelsea in December 2015 they were technically in a relegation battle. United, already closer to the bottom of the table than the top, could easily find themselves in the same situation by Christmas. As remarkable as it sounds, this might only be the beginning of Man Utd’s crisis.