Harry Maguire trudged off the Wembley turf looking like he had the weight of the world on his shoulders. Having just been red carded in what would prove to be the pivotal moment of England’s 1-0 Uefa Nations League loss to Denmark, the defender appeared close to tears as this latest difficult episode started to hit home.

The Manchester United captain needs a break. Sure, the whole footballing world pretty much needs a break given that there was almost no pre-season this year and games are now being made up at record pace because of the Covid-induced delay to 2020-21. But Maguire needs a chance for a complete reset out of the spotlight.

Following his high-profile fracas in Mykonos in August, the former Hull City and Leicester centre-back has begun the new season in far-from-convincing fashion. He has been part of a United defence which has conceded 11 goals in three games since the resumption, and his abysmal performance in the 6-1 home loss to Tottenham was stark. Wednesday night’s sending-off just served to underline that he is nowhere near the same Harry Maguire whose presence and leadership at the back led England to the World Cup semi-finals only two years ago.

Sure, there can be a debate over Maguire’s qualities, but if we compare him to the man who commanded from the back for Leicester and England back in 2018, the current iteration is a shadow of the same player. At Wembley against Denmark he looked confused and distracted. Both of his bookings came after he had switched off and lost half a yard on players, lunging in to make up the ground he would normally have had covered. There was another example of the same thing in between the two yellows, with a strained glute being the result of a further misstep. Three mental errors in 30 minutes. 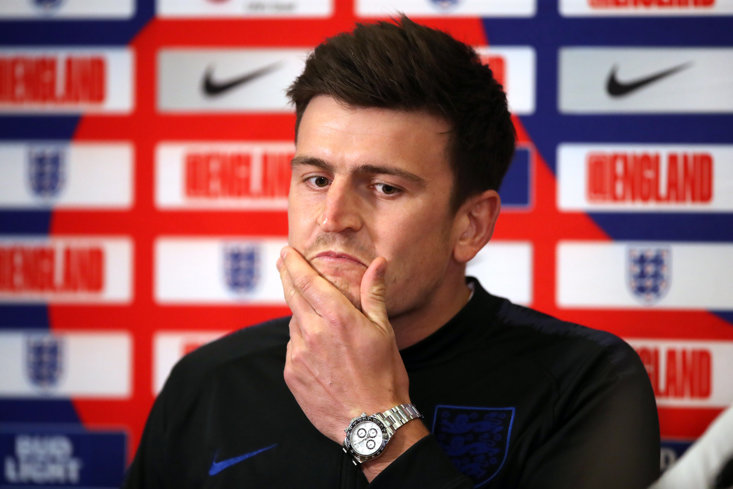 Now is the time to take him out of the firing line for a while. United boss Ole Gunnar Solskjaer might feel pressured to get his skipper out there on the field given some of the challenges ahead, with Newcastle, PSG, Chelsea, Leipzig, Arsenal, Basaksehir and league-leaders Everton all appearing on the calendar in a three-week period beginning on Saturday, but football managers need to protect their players and that is never more true than in this case.

People, of course, can react differently to any scenario. Back when Leeds United pair Jonathan Woodgate and Lee Bowyer were the subjects of a trial following an incident outside a nightclub, Woodgate found the court case burdensome and couldn’t focus on football, while Bowyer threw himself into games, welcoming the distraction from his off-pitch worries.

Whether he will admit it – whether he knows it even – Maguire could probably do with some protection right now, and that means not playing football at a point where his every little error happens in front of millions of TV viewers. The hindrance of the ongoing legal issue in Greece may or may not be behind his current downturn, but it can hardly have helped. And his form alone is reason enough to let Eric Bailly, Victor Lindelof and Axel Tuanzebe cover the decks for now.

Sir Alex Ferguson used to do a good job of identifying the right time in a season to find a week or two where he could rest any player that needed it, even sending Peter Schmeichel off on holiday in the middle of the 1998-99 treble season. While Solskjaer might not have accounted for Maguire needing time out quite so soon, it would show the strength needed by a Manchester United manager if he were to give Harry a couple of weeks to take a deep breath, recalibrate and come back to the matchday arena when his mind is 100 per cent on the job.