Football
News
The Leeds United star was on the books at Manchester United before making the brave decision to move to the US to chase his dream
Conor Keane
11:05, 30 Apr 2022

Football is full of ups and downs and many of the lows come inside the academy, where dreams hang in the balance and careers are set-up or ended.

Some struggle to get over the hardship of rejection and some use it to fuel them to make sure that their talent does not go to waste in a bid to prove people who make those life-changing decisions wrong. There have been players who have made the decision to leave their respective academies and make a big decision for a teenager: go abroad and turn their dreams into reality.

This was the case for Leeds United’s Jack Harrison, who after being on the books of Liverpool and Manchester United as a youngster, made the decision to move to the United States at 14. He moved Stateside for educational opportunities and joined a boarding school in Massachusetts before moving on to college at Wake Forest, to continue his education. However, his heart was still set on becoming a professional footballer.

The Stoke-On-Trent born winger continued to play alongside his studies and he was a standout player when he represented Wake Forest, who were an NCAA Division 1 team. As a member of the first team, he continuously impressed and Major League Soccer sides tried to snap him up, claiming him as a homegrown player because he had represented youth affiliate club Manhattan Soccer Club for the three years prior.

The MLS rejected the claim and Harrison was then entered into the 2016 SuperDraft as the youngest available player at 19. He was selected as first pick by Chicago Fire, but was then traded with New York City for fourth pick Brandon Vincent and allocation money. 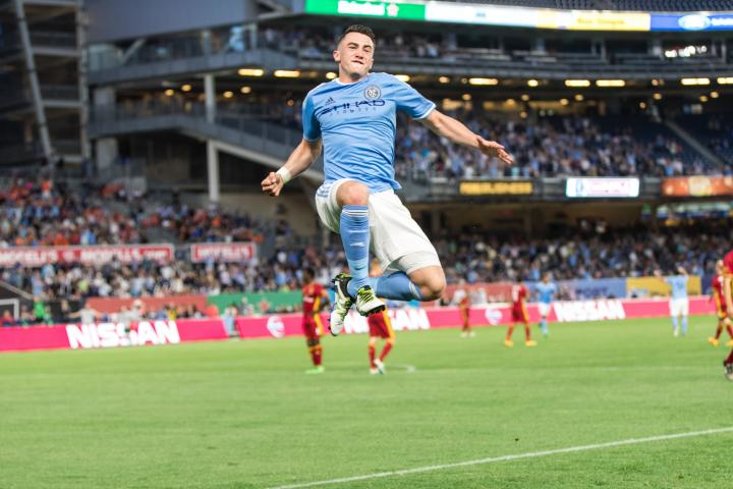 He spent two years in New York playing under current Crystal Palace boss Patrick Vieira and alongside World Cup winners Andrea Pirlo and David Villa. After dazzling across the Atlantic with 14 goals to his name, Harrison was brought back to England by Manchester City, partner club of New York City FC, and the team that he and Leeds welcome to Elland Road this weekend.

Due to the consistent success at City and a squad full of world-class players, Harrison never made an appearance for the Cityzens. When he joined he was quickly loaned out to EFL Championship side Middlesbrough for the remainder of the 2017-18 season. The following year he joined Leeds on loan for the season in what was Marcelo Bielsa’s debut campaign and Harrison was key in helping fire the Whites to the play-offs, only to be eliminated by Derby County in a dramatic semi-final second leg at Elland Road.

He joined Leeds for two successive seasons on loan after that, helping them achieve automatic promotion to the Premier League in 2019-20 for the first time in 16 years. Harrison, like his teammates, made an excellent first impression in the top-flight as Leeds managed to maintain their place in the division.

He finally joined the club permanently last summer and while this term has been turbulent to say the least for the Yorkshire outfit, the 25-year-old has been key in the upturn in form since Jesse Marsch came in to replace Bielsa. Harrison has been a shrewd signing for Leeds - he is great with the ball at his feet and has the ability to beat many top defenders. He may not be the most prolific of goalscorers, although he definitely has goals in his locker and with seven to his name in the top-flight in 2021-22, his goals will likely prove to be crucial if his side beat the drop. As a winger, his most desirable attribute is creating chances for his teammates. He has nine assists to his name in the Premier League since 2020-21.

His story will be an inspiration to young people aspiring to make it in football. Then when you add the other success stories of English stars moving abroad, the likes of Jadon Sancho, Jude Bellingham, Tammy Abraham, Fikayo Tomori and Tammy Abraham, more youngsters will realise that taking the brave step of moving abroad to help boost their careers might just be the best decision they can ever make.