Football
News
United are looking for a quick fix by selling off a potential long-term solution
Joey Mills
08:00, 16 Aug 2022

It never rains but it pours. Except it usually does rain over Manchester. But this summer’s rocketing temperatures have meant the only thing cascading down upon the crumbling edifice of Old Trafford recently has been decline and despair. The issues are too numerous to mention. The off-field woes particularly so.

But the downpour has not relented on the pitch. Manchester United have lost their opening two Premier League matches for the first time since the division’s inaugural season in 1992/93. The performances have lacked for many things. Competency playing out from the back, defensive solidity, attacking guile. But most glaring is the limp, passive nature of the midfield. So why are United looking at moving on their most promising young midfielder James Garner before he has even kicked a ball in anger this season?

Garner, who spent the last season and a half on loan at promoted Nottingham Forest, has everything United have lacked on paper. He is able to occupy that troublesome function in front of the back four that no Red Devils midfielder has truly made their own since Michael Carrick. The 21-year-old is versatile, capable of functioning in more advanced positions. His 14 goal involvements last season demonstrate this admirably. The only question about Garner, who has just two career Premier League appearances to his name, is whether he can function in the top tier.

But this same question surrounded Fred and Scott McTominay at one time or another and it increasingly appears that the answer is “no”. While the lamented 'McFred' pivot misfires either alone or together, a promising homegrown youngster capable of playing their role is being shopped around. A figure around £14 million is being quoted for Garner. Suitors as wide-ranging as Forest, Chelsea and Tottenham Hotspur are reportedly in the race to sign him. So once again, why are United considering moving the player on?

Fielding homegrown players is a point of pride at Old Trafford. There has been an academy graduate in every competitive matchday squad stretching back for over 80 years. This is the club of the Busby Babes, of Fergie’s Fledglings. While other teams bleat about being more than a club or doing things differently, United have an actual tangible thread to back up such a reputation. In days gone by Garner would be playing. Granted, in the eras of Blanchflower and Edwards or Keane and Scholes he would have been doing so sporadically. But still, that pathway would have been provided as it always has been. There are no such ingrained future legends in this United midfield. Which makes it all the more galling that United are shooing away a homegrown solution to one of their glaring and numerous problems. 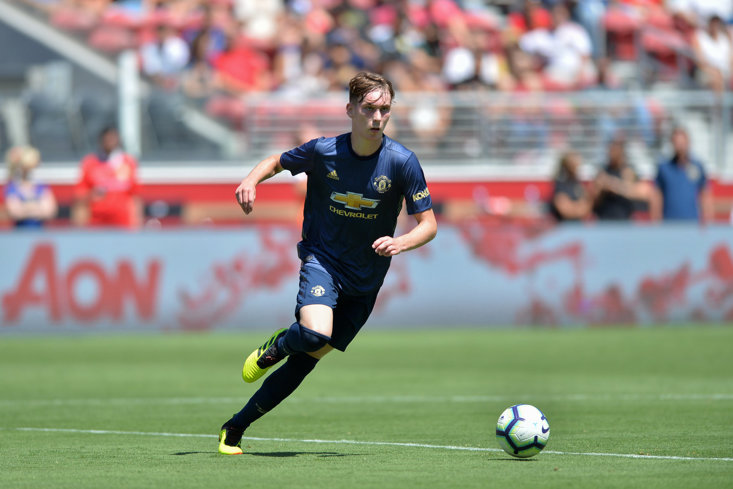 Some will argue the figures quoted are worth considering. That United would be doing smart business selling a player who has thus far only proven himself in the Championship for £14m. It is an understandable view, but one that misses where the market currently sits. This summer Manchester City parted with Romeo Lavia, an 18-year-old midfielder yet to play a senior game for any club, for £12m to Southampton. Liverpool recently sold Neco Williams to Forest for £17 million, a player with just over a third of the senior appearances that Garner has. Add in the fact that Garner addresses a problem position for United, and is coming off the best season of his career as he helped fire Forest to promotion, and £14m begins to sound derisory.

The crux of the issue here is the same as what has hindered the club’s ill-fated search for a striker. The problem is that you can smell the desperation from a mile off. The club see an injection of cash, as Garner would bring, as necessary to improve the squad. There is a recognition amongst the fanbase that the bargain-hunting chase of Marko Arnautovic was unacceptable. This fact is not lost on the club, who are now trying to sell off the family silver to fund more substantial moves.

To take this approach would be doing a great disservice to Garner, whose displays have warranted a look-in at first-team level. It would also be doing the team and the fans a long-term disservice by overlooking a potential option in midfield who could help arrest the slide. Nobody is suggesting James Garner is the solution to all Manchester United’s problems. But shouldn’t he get an opportunity to try and alleviate one of them?