Sunday's double helping of Betfred World Matchplay began with a wonderful afternoon session at the Winter Gardens in Blackpool, with James Wade being dumped out by debutant Luke Humphries in a major upset. Here's the full recap of what happened in the first four matches of day two.

Brendan Dolan never recovered from being broken in the fourth leg, despite an immediately break-back, with Krzysztof Ratajski regaining the advantage to lead 4-2 and maintaining his dominance thereafter. The Pole finished out a 102 in leg seven and then strengthened his lead by recording an 11-dart checkout to go a double-break ahead. 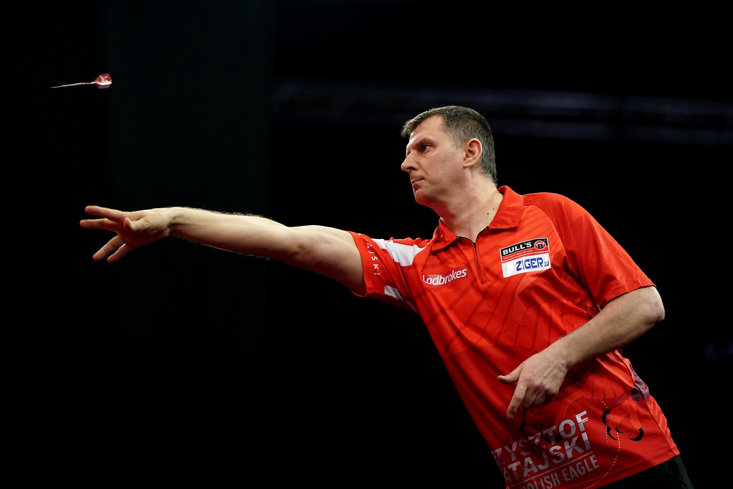 RATAJSKI OPENED THE AFTERNOON SESSION WITH A 10-4 WIN

Ratajski then finished Dolan off with a double-five after Brendan failed to land 116, recording a three-dart average of 101 on the way to a convincing victory.

Twenty-three-year-old Callan Rydz stormed into a massive early lead against the struggling Glen Durrant and held on over the remaining legs to register a 10-6 win which sent him on to Tuesday's second round.

Rydz laid a marker down from the off, breaking in the opening leg and then stringing the next four legs together too, leaving Durrant desperate for the first break. The next three legs all went against the darts as the former BDO world champ looked to regain a foothold, but he could make no further inroads as Rydz held his nerve, finishing the match on a double 10 after a dominant 16th leg.

2019 champion Rob Cross overcame an uncertain start to begin his assault on a second Matchplay title and set up a second-round clash with Callan Rydz. After a slow start, Cross reeled off six straight legs as World Matchplay debutant Ross Smith struggled to maintain the early promise which had seen him take a 3-1 lead.

But at 7-3, Smith battled back to within one and Cross was made to work hard to close out the win, although Rob should have given himself a cushion in the 15th leg but missed seven shots at the double and allowed Smith to hold. But in the 18th leg Cross closed it out with Smith 164 back as the former champion found a bit of rhythm.

James Wade, the 2007 Matchplay champion and this year's most experienced contender, saw his 2021 hopes ended at the first-round stage as debutant 'Cool Hand' Luke Humphries blasted his way past the fourth seed in a stunning upset.

Humphries came out firing, breaking immediately and then threatening to throw a nine-darter as he strung together six straights treble-20s to start the second leg. And after finishing that one out in 12, he broke again in the fifth leg to take a 4-1 lead into the first interval. But if there were any suggestions the stoppage would help Wade back into the match they were quickly dispelled, with Humphries breaking against in game seven for a 6-1 lead and opening up an 8-2 advantage by the time of the second interval.

The demolition was complete when Humphries landed a double-4 at the second attempt to break for a fourth time, clinching a storming 10-3 success.