Football
News
The Portuguese has made it his priority to get under the Gunners' skin down the years
Kris Voakes
08:00, 14 Mar 2021

When Arsenal were about to fall from their peak, Jose Mourinho was reaching his. It was Saturday 23 October 2004, and after a 1-0 defeat the previous week away to Manchester City, Mourinho’s Chelsea bounced back by hammering Blackburn Rovers 4-0.

Eidur Gudjohnsen’s hat-trick set the Blues on their way, and by the time Damien Duff wrapped up the win the footballing nation had long since turned its thoughts towards the following day’s feast. Because, that Sunday, Arsenal were heading to Old Trafford looking to avoid defeat for a historic 50th straight league game.

Of course, we all know what happened. Gunners players were fouled with regularity, Manchester United won 2-0, and pizza was thrown. Arsenal’s five-point lead soon turned to dust in the aftermath and Mourinho brought Chelsea’s first title in 50 years to Stamford Bridge, with that Blackburn win being the first game of a 40-match sequence in which the Blues would not be beaten.

Since then, Chelsea have won five titles. Mourinho has won six. Arsenal have won none.

Now manager of Tottenham Hotspur, the Portuguese would love nothing more than to add Spurs’ name to the list of clubs to lift a title in the time that the Gunners have slipped from invincible to distinctly beatable. That’s not going to happen this season, but on Sunday at the Emirates he could well deliver a derby double to remind Arsenal fans just how much they can loathe the very sight of him.

He was, of course, not just the man who led Chelsea on their march up the hill as Arsenal rolled down past them. He was also the divisive figure who got under the skin of Arsene Wenger at every turn. There were the occasional issues with Sir Alex Ferguson too, but Mourinho always showed at least a smidgen of respect for the Scot. With Wenger and Arsenal, there was no such reverence. 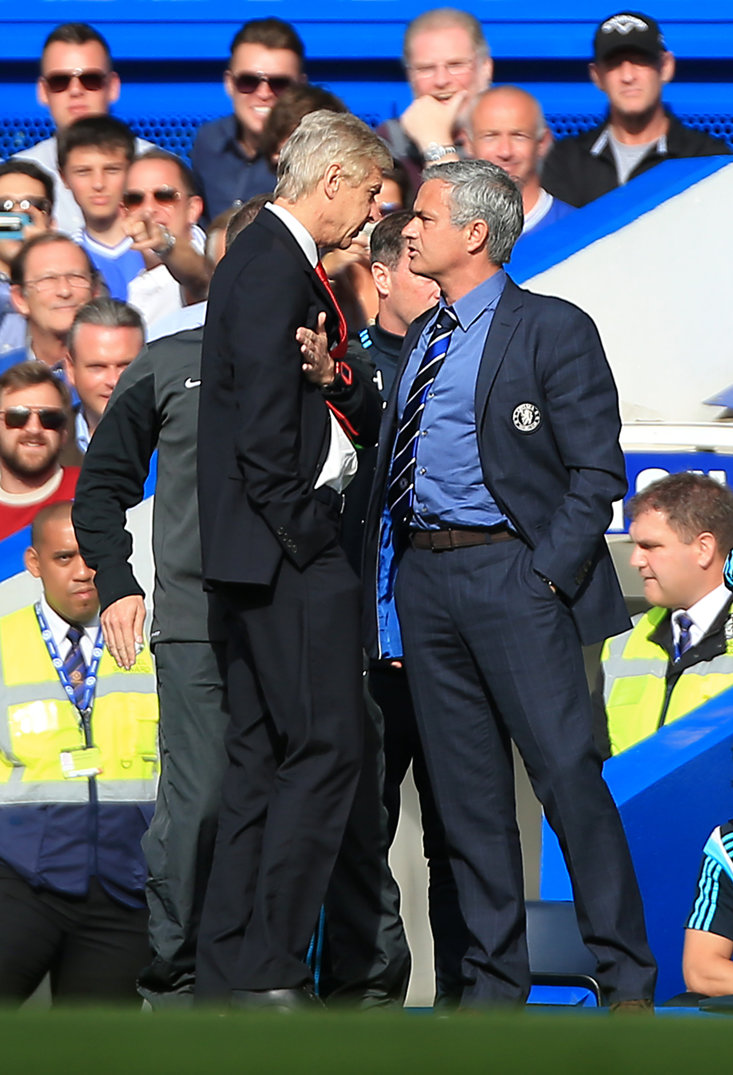 This week’s dig about not looking down at Arsenal since he only looks up was a reminder of Mourinho’s particularly notable comment about Wenger in 2005. “I think he is one of these people who is a voyeur, he likes to watch other people,” Jose said in a press conference. “There are some guys who, when they are at home, have a big telescope to see what happens in other families. He speaks, speaks, speaks about Chelsea.”

Wenger described it as “a personal attack” and admitted that it had hurt him, refusing to apologise for his regular mentions of Chelsea and even claiming that he was considering taking legal action. The pair never had anything close to a good relationship thereafter, and even 13 years on at Old Trafford, when Wenger was being gifted a commemorative vase by Sir Alex Ferguson following their years together at the top of the game, then-Manchester United manager Mourinho seemed uncertain about accepting Ferguson’s offer to take part in the photographs, so little did he and Wenger care for one another.

Arsenal have still never got the better of Mourinho in any game he would claim has counted for much. In 22 attempts, the Gunners’ only victories over the Special One came in a 1-0 Community Shield win over Chelsea in 2015 and a 2-0 triumph over United towards the end of 2016-17 at a time when Mourinho had thrown all of his resources towards a Europa League title which would follow 17 days later in Stockholm.

Mourinho’s 12 wins against Arsenal include the memorable 6-0 Chelsea victory in Wenger’s 1000th game in charge of the north London side, along with a maximum six point haul from his two derbies to date since taking over from Mauricio Pochettino at White Hart Lane.

Another win for Mourinho and Spurs on Sunday would ensure once and for all that the balance of power in north London has shifted towards the Lilywhites. And the fact that it would be yet more pain for Arsenal at the hands of Mourinho would be just another personal triumph for the Gunners’ least favourite figure in football.