Football
News
Alan Smith made the ultimate sacrifice to save Leeds United, at the cost of his reputation at Elland Road
Joey Mills
07:05, 20 Feb 2022

Gordon McQueen, Denis Irwin, Eric Cantona, Rio Ferdinand. Plenty of noteworthy players have crossed the Elland Road-Old Trafford divide. Perhaps no player has split opinion while doing it as much as Alan Smith. The impact of the striker’s 2004 move to Manchester United is keenly felt on both sides of the Pennines to this day. This is the story of how a Leeds United hero became a terrace favourite at their bitter rivals.

Alan Smith was the player every club dreams about having. Born locally, in his case the Rothwell borough of Leeds, and shaped by the club’s academy before emerging as a first-team sensation. And ‘Smudge’ was sensational. While not a prolific striker in the mould of Michael Owen, Liverpool’s equivalent hometown boy made good, he was a hard-running goal threat who was an invaluable part of the Leeds machine.

During Smith’s first four seasons in a Leeds shirt, that machine was functioning impeccably. The club finished in the top four for three of those seasons and marked their return to the Champions League with a memorable run to the semi final. Along with Mark Viduka and Harry Kewell, Smith was at the forefront of this new Leeds who were challenging the big clubs of the day. Then the roof caved in.

After a slump to 15th in Smith’s fifth season in lilywhite, Leeds were relegated in his sixth. Like Icarus, Leeds flew to the European places on wax wings, and found them melted in the sun of financial hubris. By the time the 2003-04 season arrived, the club was in £100 million worth of debt. The campaign was doomed from the start, and ended with the Yorkshire side in 19th place. On an emotional last day of the season, after a 1-0 defeat to Chelsea, Smith kissed the Leeds badge on his shirt through tears. It would be the last time he wore that particular badge. 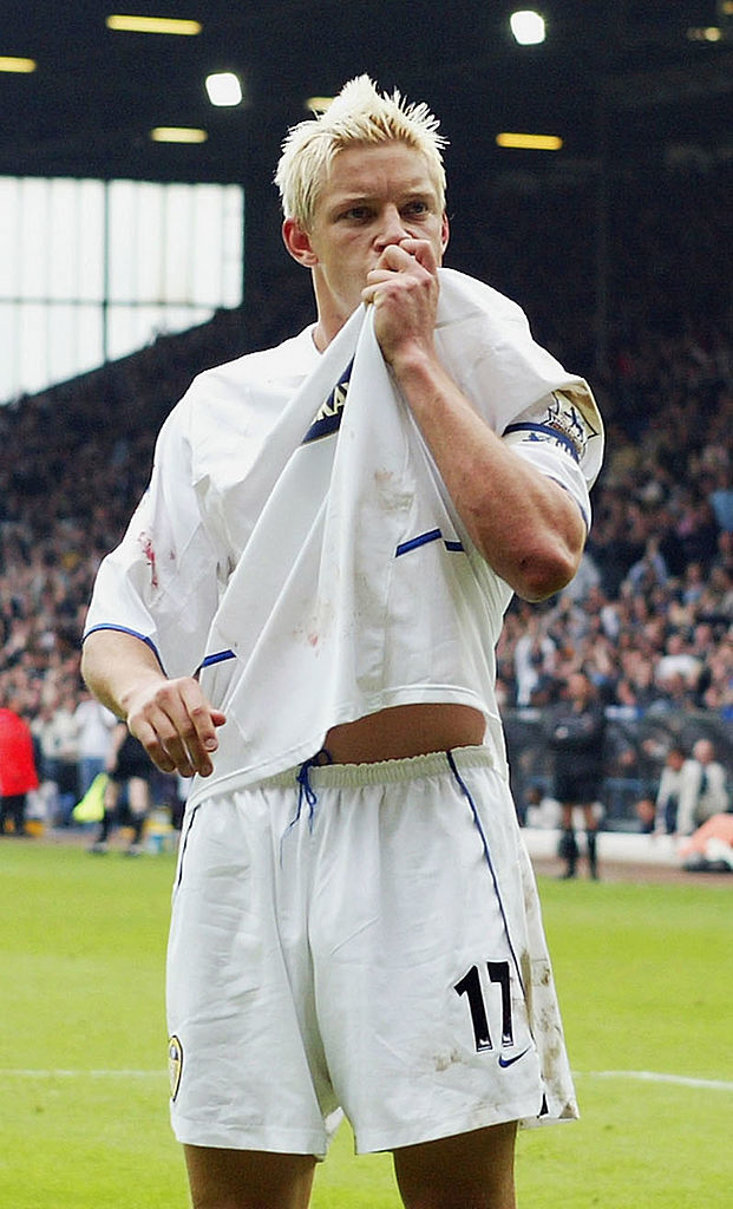 During happier times two years before, a young Smith was asked by Soccer AM if there was a team he’d never play for. “Yeah, Man United.” came the reply, a knowing smirk breaking out over the baby face of the bleach blonde star. Two years is a long time in football, but the beautiful game is also not a place where fans are quick to forget. Even in the nascent days of online football chat, this video did the rounds in the wake of Smith’s £6 million move to Old Trafford in the summer of 2004.

Their homegrown star leaving for a hated rival while the club stared down their first season in the second tier since 1989/90 rankled the fanbase. The fact they were the words of a 21-year-old perhaps daunted by the quickfire nature of Sky’s raucous magazine show was redundant. Smith, the Leeds hero, had said he’d never go to Manchester United. He would never be forgiven.

There are nuances that got lost in the reactionary maelstrom of football, and this particular transfer had plenty. One such detail, often omitted in Leeds-centric retellings, is the fact Smith waived the contracted fee due to him for any transfer. It was also Leeds, rather than Smith, who initiated the move. The club was in such peril that the £6 million fee provided an irresistible lifeline, and the hierarchy made no secret of the fact they could not continue to pay Smith’s wages. United won out in the end purely because they offered the fee in full, while other suitors like Everton and Newcastle United would only agree to instalment plans. A Leeds legacy was shattered because of financial mismanagement above and Smith being willing to move on to save the club. Hardly the ‘Carlos Tevez to Manchester City’ scandal it is often portrayed as.

Alan Smith was an instant hit at Old Trafford, scoring a spectacular volley on his debut against Arsenal in the Community Shield. He followed this up with another against Norwich City, in a game where he also provided an assist to David Bellion. Despite his Leeds connection, or perhaps because of it, the hard-working, battling Smith would be a United terrace favourite throughout his three-year spell at the club.

There were huge highs and horrible lows. A series of injuries, in particular a graphic leg break in a tie against Liverpool, limited Smith’s game time. The club stuck by Smith throughout, with the fans continuing to sing his name and the players wearing ‘For You Smudge’ when lifting the 2006 League Cup. There were glorious moments though, with Smith’s crowning achievement being his role and goal in United’s famous 7-1 Champions League victory over Roma.

Despite becoming a cult hero on Sir Matt Busby Way, Alan Smith’s move from Leeds to Manchester is still best remembered for the consternation it caused. A player during their peak moving from one team to a rival will always cause ructions. The move coming while one team is in a financial and footballing crisis only increases the ill-feeling. Alan Smith will always be a sore subject between these two sides.