Football
News
Juve had looked down and out until Chiesa's late lifeline
Kris Voakes
22:04, 17 Feb 2021

When Juventus host Porto in three weeks’ time needing only a single goal to progress to the Champions League quarter-finals, Cristiano Ronaldo will still be thanking his lucky stars that his hopes of a sixth European crown are still alive.

Ronaldo was signed by the Bianconeri in 2018 to spearhead a tilt for a Champions League win, but on the evidence of the first 80 minutes of their 2-1 defeat in his native Portugal on Wednesday evening they looked as far away as ever from being anything close to continental champions.

Incredibly sloppy defending at the start of each half had resulted in Juve chasing the game, and for the majority of the match it appeared that any third goal would kill the tie rather than bring it alive. But Federico Chiesa’s late strike gave the Old Lady a leg up and they will now go into the second leg on 9 March as favourites to progress.

That scenario looked unlikely when Rodrigo Bentancur’s erratic backpass played in Mehdi Taremi after only 61 seconds, and when Moussa Marega was given acres of space six yards from goal to take a touch and fire inside Wojciech Szczesny’s near post inside the first 20 seconds of the second half it was clear that Juventus had not learned their lesson.

For too long Juve were ponderous in possession, complacent in their own half on the ball, and tentative in defence. They looked every bit the side struggling to have a say in the Serie A title race under Andrea Pirlo and nothing like the nine-time reigning Italian champions. All the while, Ronaldo was searching for the chance to influence the game but to no great effect. 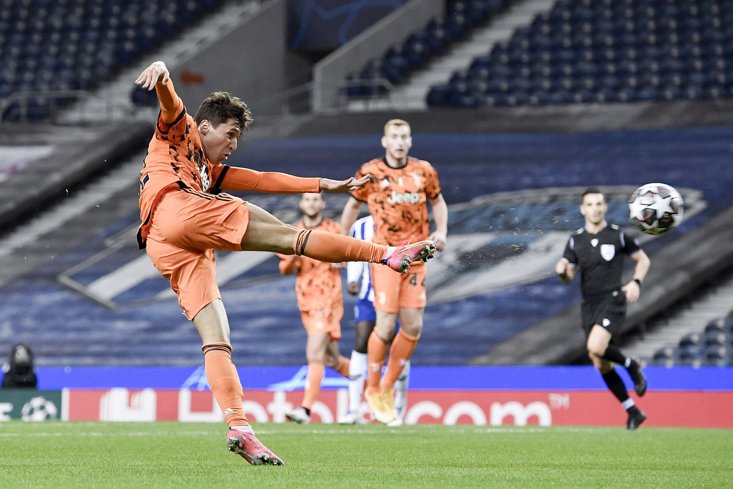 This was not what club president Andrea Agnelli had had in mind three summers ago when spending €100m on Ronaldo in a bid to finally end the club’s Champions League drought. Gone is the solidity of the side which has ruled in their homeland and reached two European finals in the last six years. Instead, this was a rag-tag display which could so easily have resulted in them being all but eliminated.

But Chiesa’s finish eight minutes from time swings the tie back in Juve’s favour, and had Ronaldo been awarded a penalty he arguably deserved after the final whistle then the Bianconeri would have had parity they certainly didn’t merit.

While Erling Braut Haaland was busy writing more headlines with a couple of goals for a swashbuckling Borussia Dortmund in their 3-2 win away to Sevilla, this was a far more timid performance from a Juventus team who are now selling Ronaldo short.

He’s now 36, playing for a team on the wane. This might well be his last opportunity to add another Champions League winner’s medal to his already extensive collection. But Juventus look far from ready to provide the platform for him to do so.