Rugby League
News
James Bentley's yellow card at 8-8 was a pivotal moment in the loss to Castleford
Kris Voakes
16:51, 18 Apr 2022

The result leaves Leeds just one point clear of bottom side Toulouse Olympique, who led Hull Kingston Rovers 18-4 at one stage but eventually slipped to a 28-24 defeat which keeps Leeds off the foot of the table for the time being.

The Tigers broke the deadlock when Kenny Edwards did brilliantly to keep the ball alive and James Clare cut inside to crash over despite a couple of attempted covering tackles. And before long they had extended their advantage with a great piece of rugby league football.

Niall Evalds looked destined to go over after a great Paul McShane break through the middle, but a wonderful Ash Handley tackle denied the Cas full-back. It was a temporary reprieve though, as McShane’s sensational kick from dummy half landed perfectly for Derrell Olpherts to make it 8-0 in the corner.

Cas shot themselves in the foot before half-time when they conceded a penalty in possession and then Jake Mamo failed to deal with Sinfield’s grubber, allowing Rhyse Martin to touch down for a converted try which brought Leeds within two at the break. 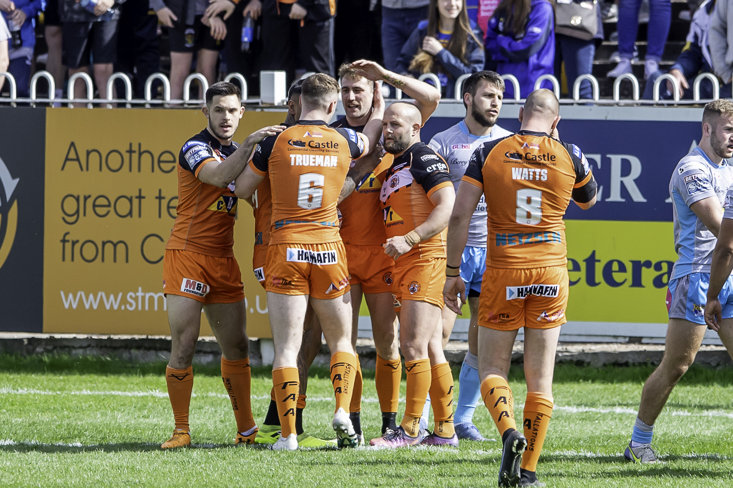 There was further sloppiness from the home side after the interval as Lee Radford’s side kept the visitors in it despite their own period’s of clear superiority. And they were punished just before the hour when Martin slotted over an equalising penalty after a high shot on James Donaldson.

But just when the Rhinos seemed to be making a real game of it, Bentley was sent to the sin bin for a swinging arm and serving of afters on Joe Westerman, with Gareth O’Brien’s subsequent penalty putting Cas back in front.

And, just before Bentley was due to return, Jake Trueman made a break and fed the supporting Liam Watts, who crashed over under the sticks to leave O’Brien with the simple task of putting two scores between the sides. That made a consolation of Martin’s 78th minute try, which came too late to save the Rhinos.

Toulouse’s loss to Hull KR in Rovers boss Tony Smith’s 500th Super League game as a coach spared Leeds the embarrassment of crashing to the bottom of the table, but Jones-Buchanan and his side will go into Friday’s clash with the French outfit knowing that defeat will see them hit the basement.