Rugby League
News
The woman who has transformed women's rugby league in this country spoke to The Sportsman...
Lewis Smith
18:00, 07 May 2021

When it comes to women’s rugby league in this country, Lindsay Anfield is something of a legend.

In five years with the club, Anfield transformed Castleford Tigers into one of the dominant forces in the women’s game, as they won the Betfred Women’s Super League Leaders Shield in 2019, and reached a raft of both Grand Finals, and Challenge Cup Finals.

Her new challenge is to achieve something similar with the York City Knights, as she joins the club as the Director of Ladies Rugby.

The Knights are founder members of the Betfred Women’s Super League, and the Women’s game has been well established in the city for a while now, and the appointment of Anfield is another step in that development, as she explains.

“I was really impressed with the ambition of the club, and Jon Flatman (CEO) in particular, he’s really wanting to invest in driving the standards of the provision for the girls at York and across the Super League as well so he wanted to set the standard as high as possible. I guess he saw me as the perfect person to do that.”

The meteoric rise of the York club in recent years has been well documented, with the men's team winning Betfred League One in 2018, and then making the Championship play-offs the year after, before moving into the brand new, state of the art LNER Stadium ahead of this season.

Now the club wants to mirror that success with the women’s team, and turn them into one of top sides in the British game.

“This was a big part of what me and Jon spoke about, and admitted that in the last few year he hasn’t done as much for the women’s game as he should have done, he’s focused on the men and the stadium, but now he wants to put the women’s game on the map.”

“It’s great for this city, and great for the development of women’s rugby league in the whole of North Yorkshire, so it’s an exciting project for me to be a part of.” 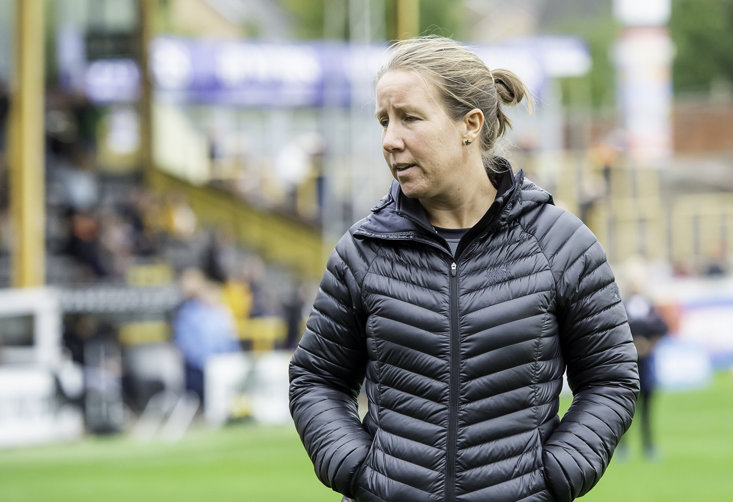 Even with the backing of Flatman and the club, Anfield has a tough assignment on her hands. There is a well-established top four in the Betfred Women’s Super League, with Castleford, Leeds, St Helens and Wigan sweeping up all of the recent honours between them, and the scorelines in the opening games of the season show that the rest of the league has some catching up to do, as Lindsay acknowledges.

“I think lockdown accentuated the problem more than anything, because the England girls trained all the way though it, so they were upskilling themselves and keep themselves fit, but the other girls and other clubs who weren’t involved with that couldn’t train so that’s made the gap even wider.

Anfield is one of three new staff members on board with the Women’s side, alongside Adam Cuthbertson joining as Head of Performance, and coach Callum Windley; and Lindsay has been impressed with what the trio has found so far.

“It’s difficult when new people come in, but they couldn’t be more welcoming, they are a great tight-knit bunch. A lot of them have been together for a long time but there’s some great talent coming though, and some transfers from rugby union which are really exciting and they have absolutely embraced the changes and the ambition of the club and us as coaches.”

Of course, the key to any long term success is developing a conveyor belt of talented players from the local area, and Anfield believes that with a home World Cup around the corner, there is no better time to attract girls to the game of Rugby League.

“It’s the biggest stage. Having a home World Cup is what the sport has dreamt of, and especially with the rise of the Betfred Women’s Super League we need to make the most of it.”

“York being one of the cities that is hosting four of the teams in terms of where they are based, and hosting the semi-finals for the women, it’s going to be really on the map. We need to make the most of it as a club and reach the potential that it can bring to women and girls rugby in the area.”

Attentions turn to the Betfred Challenge Cup next for York as they take on Wigan Warriors, available to watch live and exclusive right here on TheSportsman.com, and Anfield is under no illusions of the size of task facing them.

“Last time Wigan played York it was 42-0, so we’ve got to look at that game and try to reduce that scoreline. We have every ambition that we want to be really competitive and give them a great game, and just try and act out the things we’ve been putting in in training this week and see where we we’re at.”

Whilst that scoreline is clear indicator that Wigan will be favourites again at the weekend, Anfield believes that these are the kind of games that will drive improvement in her side.

“There’s always players who play better than they train, so putting them in that environment of playing with the best players in the league sets the standard and sets the benchmark of where we want to be.”

York City Knights Ladies
@yckladies
🏆 Our @Betfred Women's @TheChallengeCup tie against @WiganWarriorsRL on Sunday (12 noon KO) is being shown LIVE on @TheSportsman!
You will be able to watch the action at the link below 👇
📺
#WeAreYork⚔️
7
19

Realistically, it may be too soon for the Knight’s to upset the applecart too much at the weekend, Lindsay and her staff have only had a few sessions with the players, but whatever the result, it is hard to not feel an overwhelming sense of optimism about the future of women’s rugby league at the York club.

York City Knights vs Wigan Warriors will be available to stream, free of charge on our website and Youtube page this Sunday, kick-off at 12pm.