Football
News
The Argentine legend's every move is being put under the spotlight in Paris
Simon Lillicrap
17:54, 20 Sep 2021

When Lionel Messi was substituted with 15 minutes to play against Lyon, the camera curiously zoomed right in, hoping to catch even the faintest bead of sweat falling from his brow. The producers were primed and ready to catch the golden shot of the great Messi showing some sort of dissent to manager Mauricio Pochettino as he came off, or even better, a tear falling from his eye as he stormed down the tunnel.

None of that happened. After a slight shrug of the shoulders and a few words with Pochettino, Messi took his place on the bench to watch the rest of the match and the PSG players gawped at him. As he took a sip of his refuelling drink handed to him by countryman Leandro Paredes, the fans close to the dugout attempted to get their pictures of the six-time Ballon d’Or winner.

Despite the media clamour for a story, there was no unprofessionalism from Messi. Just a footballer who had been substituted by his manager. He watched on as PSG gained a vital three points against Lyon thanks to a last-minute winner from Mauro Icardi, which maintained their perfect start to the league season.

Messi, for all his unquestionable footballing ability, is still human. His performance on the pitch was a good one and although the fluidity with Neymar and Kylian Mbappe is yet to click quite yet, that is a difficult relationship that will take time to form and flourish. There also needs to be some context added to his goalless run so far.

He has only played 100 minutes over two appearances in Ligue 1 so far, with 24 of them coming off the bench in the first match. Combine that with 90 minutes at Club Brugge in the Champions League and it is obvious to any sensible onlooker that he is still finding his feet among his new teammates. To call it a ‘goal drought’ or label him a flop already is harsh to say the least. 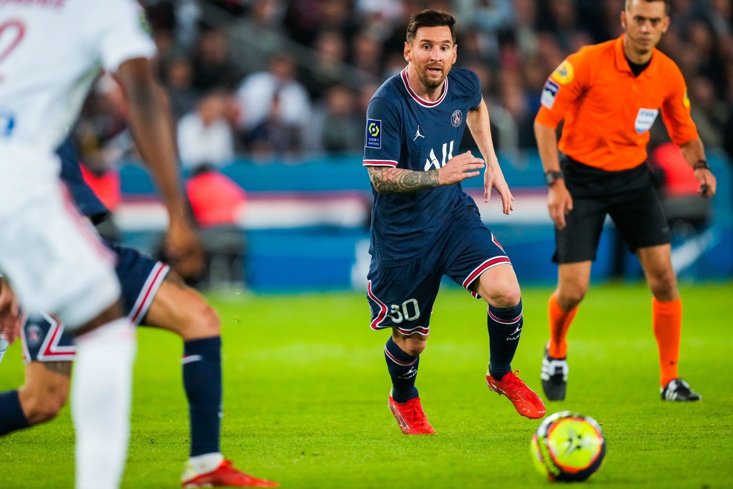 MESSI'S EVERY INTERACTION TAKES PLACE UNDER THE MICROSCOPE

This has also been a big move for Messi on a human level. His entire family have had to relocate from the city where he has lived since the age of 13, and the place where he felt completely at home. Now, he is in a new place, with a new language to learn and it is only natural that he does not yet feel settled in his new surroundings.

The expectations around him are greater than the ones Charles Dickens wrote about in the 13th century, and it seems, for now, we will have to be patient to see the best of Messi again. At the moment, it feels like the whole world is watching his every move, even when he is off the pitch.

There are reports that the worldwide viewership online dropped by up to 70% when Messi was substituted, even when the game was evenly poised at 1-1, while his debut was the most watched French football match in Spain, ever. He is a huge influence on world football and millions of viewers choose to follow him, rather than a team.

That rise of the modern football fan online has seen Pochettino slated online for substituting the former Barcelona man, even though that decision helped win his side the match. Player power is now at an all-time high and the job of balancing the egos of this PSG side will be a hugely difficult one for the Argentine boss, but if he wants to take a player off, that is his prerogative.

Although it is early days, it seems that, unlike Barcelona, PSG are not going to be solely reliant on Messi. Pochettino will have to find a way to make this attacking trio work together, and in turn, they will have to work for the benefit of the team. Messi has great expectations on his shoulders, and he will surely deliver, but in a new city after a summer of upheaval - patience is required.