Football
News
It has been 55 years since Jock Stein's Celtic beat Inter Milan 2-1 in the Portuguese capital
Matthew Crist
06:55, 25 May 2022

It’s a night that’s ingrained into the long and illustrious history of Celtic football club to this day as, on May 25 1967, the Hoops became the first British side to win the European Cup, overcoming the mighty Inter Milan 2-1 in Lisbon.

A fantastic achievement at the best of times, but made even more special by the fact that all 11 of the players wearing green and white that night grew up within 30 miles of Parkhead - a bunch of local lads who would forever be known as the ‘Lisbon Lions’.

Former player Stein had been named manager just two years earlier following short stints in charge of Dunfermline and Hibernian with the Celtic board seeking to elevate the club out of mid-table mediocrity, not to mention the shadows of their rivals across Glasgow who had won the title three out of the previous four seasons.

The decision to hire something of an unproven coach was seen as a gamble at the time, but their faith would be rewarded in a manner that few could have believed would be possible.

A strong team spirit was galvanised by the fact that Celtic’s side was brimming with local lads with 14 of the 15 men involved in that campaign hailing from within a 10-mile radius of Celtic Park, most of whom had been given their big chance having plied their trade in the youth team.

Celtic secured the first trophy of a glorious campaign by lifting the Scottish League Cup with a 1-0 win over Rangers on 29 October 1966 before lifting the Glasgow Cup just a week later with victory over Partick Thistle.

A brace from Willie Wallace against Aberdeen at Hampden Park secured the Scottish Cup in May and just days later a league and cup double – not to mention a domestic quadruple – was completed as two goals from Jimmy Johnstone earned Celtic a 2–2 draw with nearest challengers Rangers to clinch the league championship.

Having overcome FC Zürich, Nantes, FK Vojvodina and Dukla Prague to reach the final, only Italian champions Inter stood in the way of Celtic and footballing immortality heading into the final of the European Cup in the Portuguese capital. 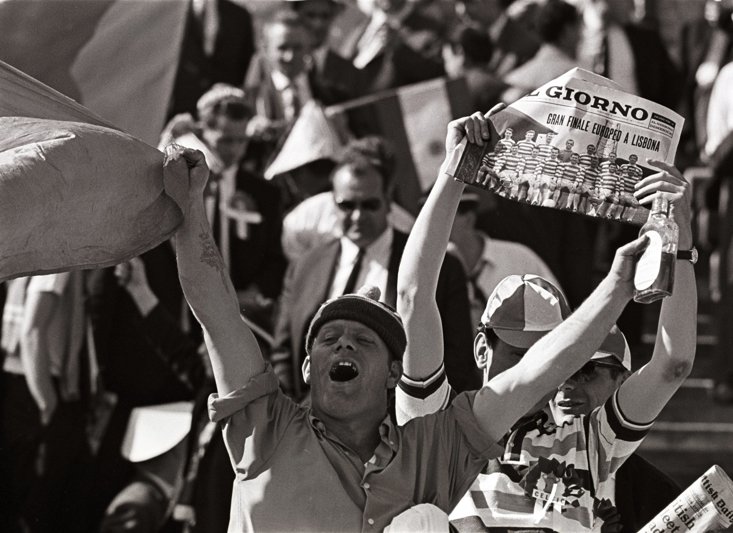 70,000 spectators crammed into the Estadio Nacional in Lisbon to watch Celtic try to become the first British team to lift the European Cup with many fans making the journey from Glasgow by land, air and sea to cheer on their heroes.

The task facing Stein’s men was a daunting one, however; Inter had been champions for the two consecutive years in 1964 and 1965 and were many people’s favourites to take the cup back to Milan once more.

And things couldn’t have started any worse for the Hoops when, after seven minutes, the Italians won a penalty after Jim Craig caught Renato Cappellini in the box and Sandro Mazzola tucked it away.

Celtic swarmed forward looking for an equaliser as the Italians were pegged back in their own half for much of the remainder of the game and would have 39 shots on goal while their goalkeeper Ronnie Simpson would only make two more saves all game.

Eventually, in the 63rd minute, Tommy Gemmell unleashed a powerful shot that flew into the net to bring Celtic back on level terms, but not prepared to settle for extra-time, they continued to push for a winner.

With Inter unable to break out of their defensive positions, Celtic continued to ride the wave of momentum their equaliser had brought with it and in the 84th minute, Stevie Chalmers prodded home Billy McNeil’s effort from close range to win the game, and the European Cup.

Celtic fans poured onto the pitch to celebrate their team’s victory at the final whistle; grabbing lumps of turf, taking shirts, boots and anything they could as a souvenir of the club’s greatest ever achievement.

Mobbed by jubilant fans, Celtic skipper Billy McNeill had to enter the press box through a service entrance where he was presented with the famous trophy while the rest of the team received their medals in the dressing room.

“There is not a prouder man on God’s earth than me at this moment. Winning was important, but it was the way that we won that has filled me with satisfaction,” Hoops boss Jock Stein declared after the match.

As well as euphoric scenes in Lisbon at the final whistle, the team flew back to Glasgow to a hero’s welcome at Celtic Park where 60,000 fans packed into the grandstands and terraces for an impromptu victory parade.

Celtic would win 10 League titles, eight Scottish Cups, six Scottish League Cups and would go on to reach the final of the European Cup again in 1970 – eventually losing to Dutch champions Feyenoord - during Jock Stein’s 13-year tenure with the club.

But that European Cup victory against Inter in Lisbon in 1967, as a team of local lads who had grown up in the shadow of Parkhead defeated one of the greatest sides in Europe, will forever be regarded as the club’s finest hour.