Manchester United’s highly-anticipated clash with Liverpool has been postponed after protestors stormed the pitch at Old Trafford.

It’s the latest in a long line of protests at Premier League grounds in recent weeks over the failed controversial European Super League with fans furious at the ownership of their beloved clubs.

Pictures on social media showed players looking out of their windows as the United team were still hauled up in The Lowry Hotel less than an hour before the scheduled 16:30 kick-off time. It was announced 45 minutes before the original kick-off time that the game had been unsurprisingly delayed on safety grounds. Thousands of disgruntled United supporters gathered outside the famous ground, with hundreds more camped outside the team hotel just hours before the game.

The anti-Glazer movement has gained major traction in the past couple of weeks. United supporters have been angry at the Glazers’ ownership of the club for years and their role in the Super League was the final straw. Mere days after the proposed breakaway flopped, United co-chairman Joel Glazer “apologised unreservedly” to supporters. He admitted, “We got it wrong, and we want to show that we can put things right.” But that did little to temper the fans’ fury on Sunday afternoon.

Placards demanding the Glazers out were seen far and wide with flares let off around the city. Flags ranged from “Love United, Hate Glazers”, “Apology not accepted, 50+1 #ProtectTheLegacy” and “Your funeral not ours, MUFC will never die” to further illustrate the fans’ distain at the current ownership. Volunteers even handed out signs to protestors who didn’t have their own. 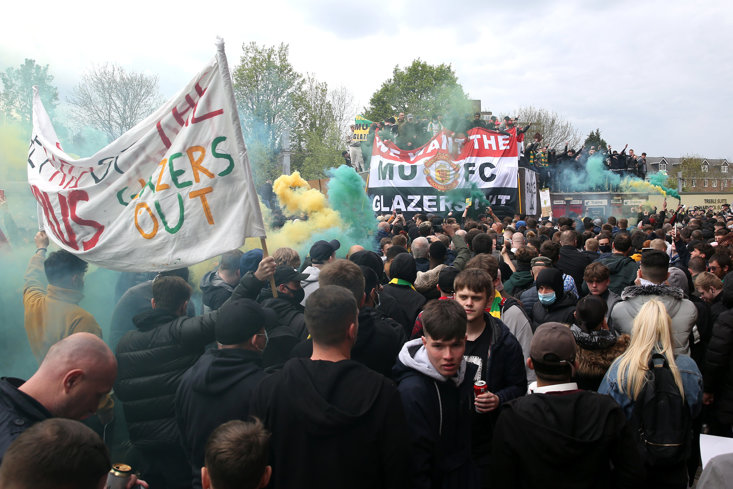 The unsavoury scenes spilled over into the ground and then even the pitch as around 200 protesters forced their way past the Greater Manchester Police cordon. Fans chanted for the Glazers to get out of their club whilst some took corner flags, threw chairs and other objects.

The Sky Sports platform came under particular fire with a flare thrown in the broadcaster's direction and chants of “stick your f***ing cameras up your a***” aimed towards them. A handful of fans made their way down the tunnel and towards the dressing rooms before the interior of the ground was initially cleared with ground staff having to remove litter from the pitch. But a second group managed to breach security and get into the ground where away supporters usually sit.

Referee Michael Oliver and United legend Gary Neville’s cars were surrounded by protestors, but they were allowed to pass safely with chants blaring out.

Before the planned protests, Red Devils’ boss Ole Gunnar Solskjaer said, “It’s important the fans’ views are listened to and we communicate better. My job is to focus on the football side and that we have the best possible team.” 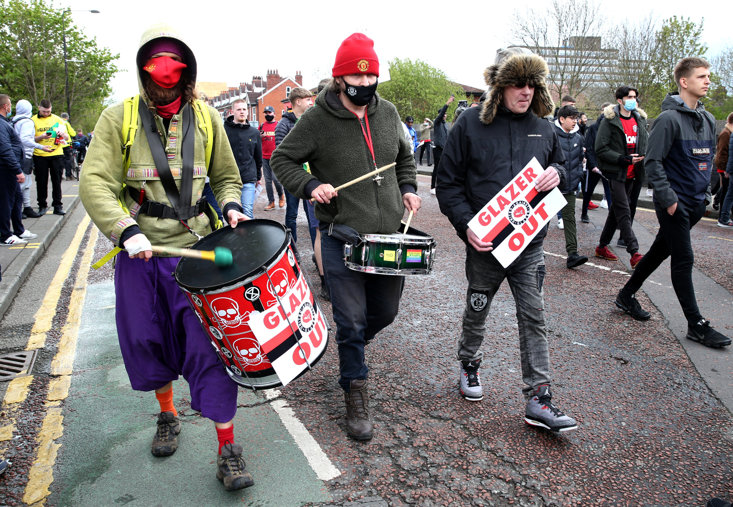 Green and gold smoke filled the air and the symbolic rejection of the Glazer family’s ownership dates back to Newton Heath, the club founded in 1878 that then became Manchester United in 1902, which wore a green and gold strip. The movement started over a decade ago as 30,000 fans swapped the usual red and white colours for the coloured scarves at the 2010 Carling Cup final with chants of “We Want Glazers Out” bellowed around the ground.

United were one of six English clubs who announced they would be taking part in the much-maligned league, before they all pulled out. There were also mass protests outside the Emirates as Arsenal hosted Everton last week with fans urging Stan Kroenke to sell up. And Chelsea fans caused their kick-off against Brighton to be delayed by 15 minutes when they blocked the team bus from entering the stadium before cheers replaced their jeers after the Blues announced they had withdrawn from the proposed league a fortnight ago.