On this day in 2014, La Liga was graced with the highly-anticipated arrival of Luis Suarez as he made his debut for Barcelona. After tarnishing his reputation with his third biting scandal at that summer’s World Cup in Brazil, the striker appeared to be damaged goods having been handed a four-month ban. But when the Catalan club came swooping in to sign him from Liverpool, they were effectively offering him a career lifeline – and it paid off.

While his behaviour off the ball always had him pegged as a ticking time bomb, the Uruguayan with the ball at his feet could do extraordinary things. His debut came in a defeat to bitter rivals Real Madrid in El Clasico, and it took him a while to find his feet at Camp Nou. He had to wait until his sixth game to score his first goal for the Blaugrana, away at APOEL Nicosia in the Champions League group stage.

As he still looked to settle in his new side he delivered a resounding performance in the next Champions League game, scoring in a 3-1 victory over Paris Saint-Germain. With some top performances being turned in by the former Liverpool star he got off the mark in the league in December 2014 in a 5-0 thrashing of Cordoba. He was blessed with being the lone striker deployed in the middle of Neymar and Lionel Messi, the infamous ‘MSN’, becoming regarded as one of, if not the, most dangerous front three the beautiful game has ever seen.

Suarez played a key role in his first season at Barca, helping them to reclaim the league title from Diego Simeone’s Atletico Madrid with a 16-goal haul, including a hat-trick against Cordoba in the away fixture in which Barcelona ran rampant in an 8-0 thrashing. Suarez had missed almost three months of the campaign and yet managed to hit just shy of the 20-goal milestone that all of the best strikers in Europe aim to hit each season.

It was an incredible debut campaign in Spain for the controversial forward as he also helped his side to Champions League glory, defeating Juventus 3-1 at the Olympiastadion in Berlin in the final with his go-ahead goal at 2-1 proving crucial. He showcased his poacher’s ability to react and finish when Messi had his effort from outside the box parried by Gianluigi Buffon.  And that wasn’t all that year, as the Catalan side claimed the Copa del Rey title with a 3-1 victory over Athletic Club.

His six years at Camp Nou were fruitful, as he amassed a total of four La Liga titles, four Copas del Rey, two Spanish Super Cups, one Champions League, one Uefa Super Cup and one Club World Cup title. In his second season he was a man possessed, as he inspired Barca to a second consecutive league title with 40 goals, which earned him the prestigious Pichichi trophy. His total for Barcelona in all competitions that term was 60, scored across 55 matches, which led to him picking up the even more heralded European Golden Shoe.

Over the course of his time in Barca’s famous colours, Suarez scored 198 goals and claimed 97 assists in 283 games, becoming the club’s third highest scorer of all time. And for all the good fortune he brought the club, he was cast out into the dark by current boss Ronald Koeman in 2020. Suarez was not happy with the way his exit was handled, stating that Koeman rang him in a call lasting 40 seconds, saying only that the then-33-year-old was not in his plans. The striker felt that was “not the way to say goodbye to a legend.”

This decision proved to be one of many mistakes the Dutchman has made during his tenure as the Barcelona boss, and Suarez was never going to be short of options. It was Simeone who convinced him to join the Atletico project, and it turned out to be a masterstroke by the Argentine.

UEFA Champions League
@ChampionsLeague
Luis Suárez begins his Atlético career with two goals and an assist... despite coming on as a 70th-minute substitute. 🔥🔥
Best signing of the summer?
#UCL 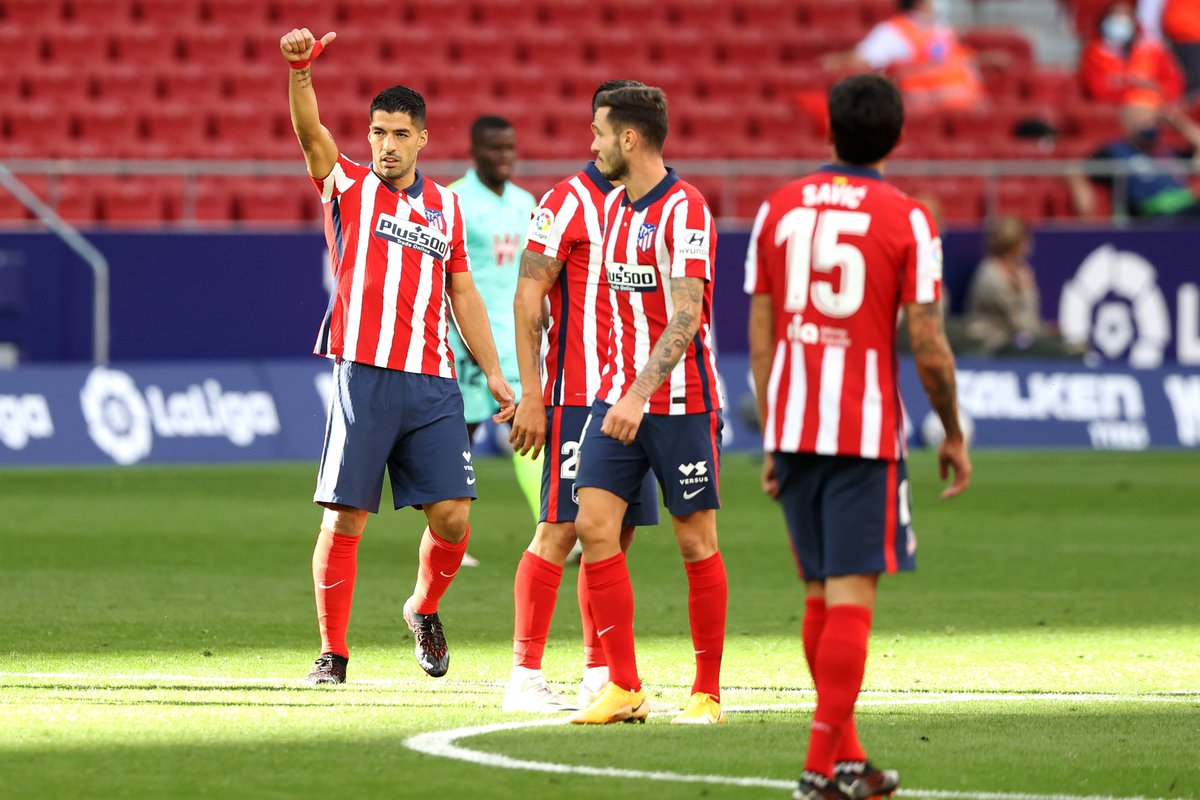 The veteran striker rolled back the years to become an integral figure for the Colchoneros, inspiring them to their first La Liga tile since 2014, with Suarez registering 21 league goals. His most important strike came on the final day of the season to complete a turnaround against Real Valladolid which snatched his club the title. At the end of the game the 34-year-old was captured sat on the pitch visibly emotional on the phone. It was the release of someone who had proved to himself and to others that he still had what it takes to win titles.

After being shunted out by the club he gave so much to, he is still showcasing that he remains one of the deadliest strikers in Europe, and while he has to compete with the return of Antoine Griezmann, he still adds quality in depth to Atletico’s squad, as evidenced by his two goals to rescue a draw against Real Socidad on Sunday. Time and again he has proven his critics wrong, becoming one of the greatest strikers of this generation, and the Uruguayan has plenty more to give.

Life in Spain has been the making of him.