Football
News
The former United star says the forward line would be decimated if the Portuguese left this summer
Neil Goulding
10:02, 08 Jun 2022

Gary Neville believes Manchester United would be “lost” without Cristiano Ronaldo. Ronaldo bagged an impressive 24 goals in 38 games across all competitions for the Red Devils this season, but the 37-year-old Portuguese star’s future remains uncertain after another disappointing campaign from the club which brought no trophies.

Fellow striker Marcus Rashford has struggled badly for form, Edinson Cavani has now left the club and Mason Greenwood missed much of the season after being arrested on suspicion of rape and assault.

“For me if Ronaldo leaves we’ve not got a centre-forward,” Neville tells The Sportsman. “Then we have to go and sign three players. And we can’t sign three because we haven’t got the money.

But the 47-year-old, like many of his former Class of ’92 teammates, has been left dismayed with the club’s management and sorry demise.

“I think Ronaldo is staying,” stresses Neville. “[But] I’d be very surprised if he’s just kept for commercial reasons. When [new manager Erik] ten Hag was announced, within two or three days, Cristiano put something out on his social media feed.

“In my mind he wouldn’t have put something out unless there was comfort that the new manager wanted him for next season. I think Cristiano is staying, but I think the problem started at the start of the season.

“Cavani pleaded to stay and lead the attack for another year, but when the club signed Ronaldo it completely put his nose out of joint. Cavani was completely shot then. He was finished. 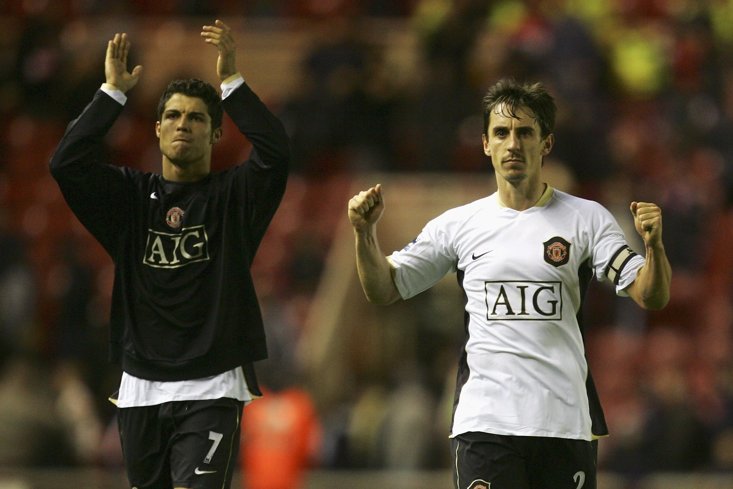 NEVILLE WAS A TEAMMATE OF RONALDO'S AT OLD TRAFFORD

“It also upset the dynamic in the dressing room with Bruno Fernandes, because he looks up to Ronaldo as a God-like character because of Portugal. I think that made him feel a bit inferior to what he was before. It also made [Harry] Maguire naturally feel inferior as captain. Not from Ronaldo himself, but his presence on the pitch. Everyone looks to Cristiano.”

Neville adds: “I know the way Cristiano looks at you when he doesn’t get what he wants. He was doing that 15 years ago when he was a kid, so he’s going to do it now. Eric Cantona had a little bit of that about him. Cantona wouldn’t shout at you, he’d just have that little look.

“We could handle it because there were other great players in the dressing room like the likes of Steve Bruce, Gary Pallister, Roy Keane and Paul Scholes. With all those players around him it was never a problem, but with a failing dressing room, in a poor team, those looks can be devastating.”