Rugby League
News
The scrum-half is back for a Rhinos side looking to get back to form
Lewis Smith
12:00, 14 May 2021

Two teams in desperate need of a win come head-to-head in Friday’s Betfred Super League offering, as Wakefield make the short trip to Headingley to take on Leeds Rhinos.

Only Leigh Centurions sit below Trinity in the league table, with both sides still looking to register their first win of the season, as pressure continues to mount on Wakefield head coach Chris Chester.

Leeds have fared marginally better. Their opening day win against Wakefield is still their only success of a campaign which has been ravaged by injury in the opening six rounds.

The inpatient list in the Rhinos medical room has got slightly shorter this week with captain Luke Gale returning from a four-game absence, whilst Kyle Eastmond also returns to the 21-man squad.

There are still at least six first-team players on the treatment table however, including Harry Newman and Jack Walker, while Richie Myler and Zane Tetevano also miss out due to suspension.

Both sides have had a week off from games, with the Challenge Cup quarter-finals taking centre stage, but Richard Agar’s side have had plenty to work on following their defeat to Huddersfield Giants in round five.

The Rhinos came into this season with play-off ambitions after lifting the Betfred Challenge Cup in 2020, and even though we are only five games into the season this game already has the feel of a must-win clash if those ambitions are to be realised. 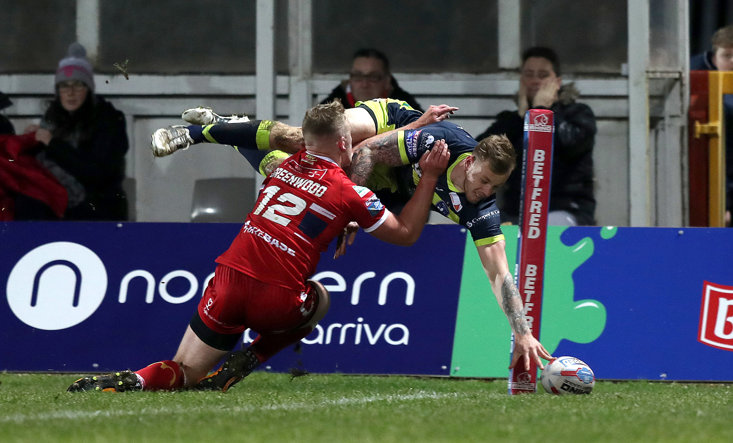 ACE FINISHER TOM JOHNSTONE IS A CONCERNING ABSENTEE FOR TRINITY

Trinity have injury concerns of their own, with Tom Johnstone still absent with concussion concerns and captain Jacob Miller also missing from the 21-man squad, but they are able to welcome Matty Ashurst into the fold.

Wakefield were encouraging in defeat on opening day but have struggled since then, their late 20-14 defeat to Hull FC the closest they have come to breaking their duck.

After a disappointing 2020 season, Chris Chester will know that he can ill afford for this losing streak to last much longer, with questions already being raised about his position.

This is a game that both teams will identify as eminently winnable and both coaches will feel that this might the best time possible to play the opposition, with confidence in short supply on both sides of the ball.

Gale has been talismanic for Leeds at times since signing in 2020, and his presence could be crucial to the Rhinos getting back in the winners’ circle.

For Wakefield, perhaps their best hopes of finally registering a win lie on the shoulders of Mason Lino, who has shown some encouraging signs despite his side’s slow start.

This game will be available to stream, free of charge, on Sky Sports’ YouTube page.