A cruel deflection off Ruben Dias’ boot gave West Brom an equaliser at the Etihad Stadium and it felt like it summed up Manchester City’s start to the season. It was mid-December and Pep Guardiola’s side had managed only five wins in 12 matches, drawing five and losing twice.

Four days later, champions Liverpool went to Crystal Palace and won 7-0. Seven goals, a clean sheet, and a win on the road. This was the Reds’ trophy again. Having waited 30 years for the title, just like buses, the second would be on its way to Merseyside immediately after the first. That Saturday, just a week before Christmas, City won away too, at Southampton. An unremarkable 1-0 victory courtesy of a Raheem Sterling strike. It meant little on the day. City were ninth and eight points off the top. They’d blown the season before it had barely got going.

Oh, how wrong we all were. How blind we all were to the supremacy of Manchester City and the unrelenting pursuit of greatness which pumps through Guardiola’s body on the touchline. That win on the south coast at St Mary’s was remarkable, it turns out, since it set up an extraordinary 21-match winning run which shows no signs of being halted.

Sure, this isn’t the first time a team has dominated in the Premier League. Sir Alex Ferguson’s Manchester United, Arsene Wenger’s Arsenal, Jose Mourinho’s Chelsea; they’ve all blown us away, winning with such consistency the team is almost like a robot, like the Terminator, you just can’t get the better of it. 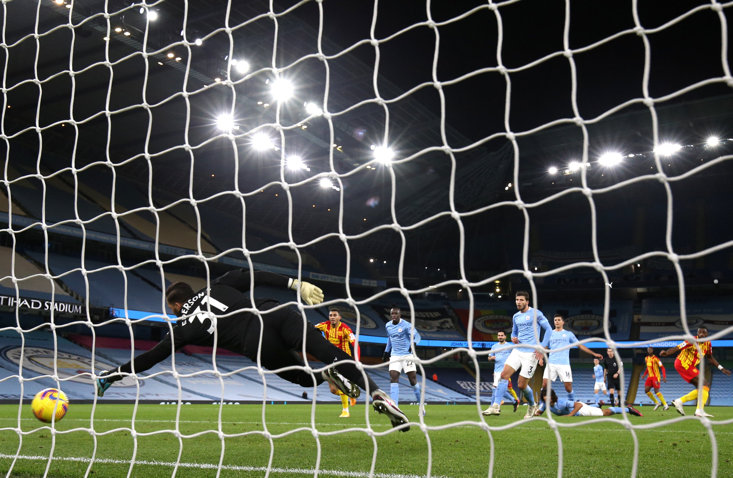 What makes City’s achievements even more impressive though this season, is the way in which they started this campaign. The Premier League was basically given a headstart such was their stuttering form of September, October and November.

Mentally, it must have been rough, looking at the table and seeing themselves in ninth, knowing they had a mountain to climb and that Liverpool were probably already too far ahead. But they used that to spur them on. Guardiola is a perfectionist, no matter what went before, he will have inspired his players to keep going, to be victorious again and to make history. Throughout, the City boss has been adamant that the club must only focus on the next game, and it has worked. They are so focused.

On Tuesday night it looked, for a short time, like it would be Wolves who would end the spell. It was 1-1 with only 11 minutes to play. Fast forward to full-time and Riyad Mahrez and a Gabriel Jesus double had made it 4-1. They were ruthless. Much like United under Ferguson, it looked like they may have to settle for a point and then bang, they blow the opposition away with a goal and another and another.

“We were outstanding tonight,” Guardiola said after this latest victory. “We were so serious. We have momentum now. We wouldn’t have won at the start of the season.”

He’s right. They wouldn’t have. City, though, have used that early struggle to propel them forward. That form is their reminder that it can all feel so much more difficult when the momentum is lost. They may not have won this one at the start of the season but who would bet against them winning every game they play from here on in? You’d have to be very brave, because on this evidence, City are a freight train hurtling to another title, hellbent on beating every team that stands in their way.