Manchester United last beat Burnley at Old Trafford back in February 2015 heading into this one. And for 83 minutes after the Clarets had found the net after just ten seconds, it seemed the Claret’s six-year unbeaten run at the Theatre of Dreams would continue. However, Mason Greenwood, who was just 13 the last time the Red Devils beat Burnley on home soil, showed his quality to score a brace to clinch a 3-1 victory for the hosts.

Finding the net twice, meant he matched Wayne Rooney’s 15-goal haul for a United teenager in the Premier League and this was another game in which he proved he is ready to be a key player in this team.

While Sean Dyche’s side had enjoyed a stellar record here in recent times, they perhaps even shocked themselves when they found the net after just ten seconds. However, Chris Wood’s strike was ruled out by VAR after he was adjudged to have been in an offside position when striking the ball. It was a seriously early reminder for United, that Burnley, though 17th in the table, could be dangerous. 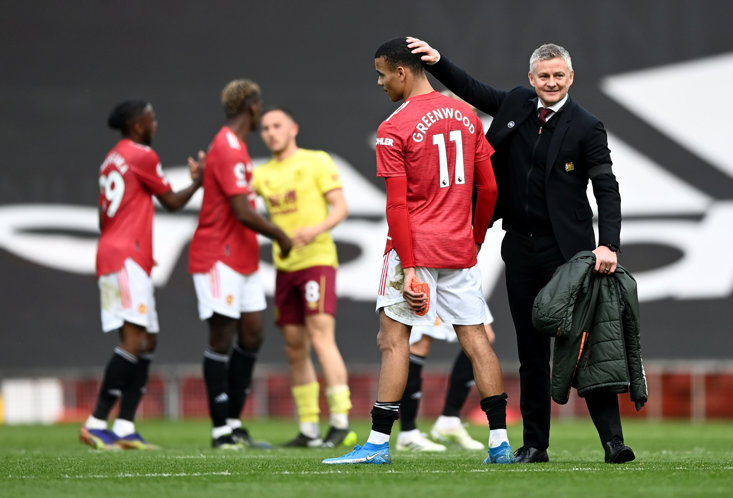 GREENWOOD IS CONGRATULATED BY OLE GUNNAR SOLSKJAER AT FULL-TIME

United responded, Paul Pogba heading a couple of chances over the bar but the visitors perhaps looked more likely to score in the first half and looked in charge from set-pieces. However, the two teams went in at the break goalless.

Then Greenwood found the breakthrough. Just three minutes after the restart, Marcus Rashford darted clear of a challenge from Matthew Lowton down the left and put in a cross for the frontman to finish. United were ahead but that lead lasted no more than 120 seconds as centre-back James Tarkowski leveled for Burnley.

Dwight McNeill is a direct presence on the left-wing for the Clarets and forced a corner from Harry Maguire who then failed to stop his fellow defender from heading home. Pogba, Rashford, Greenwood and Edinson Cavani, who had been introduced at half-time, combined well going forward but Burnley were equally as efficient in creating chances.

As the time ticked away, United still couldn’t find a winner and it seemed Burnley’s Old Trafford run would continue. With six minutes remaining, the ball finally got over the line for Ole Gunnar Solskjaer’s men. It was Greenwood again; the youngster cut inside from the right and his electric shot took a deflection off Jack Cork to beat goalkeeper Bailey Peacock-Farrell who was diving the other way.

The Red Devils controlled things after snatching the lead before killing the game off. Denying Matej Vydra and a late Burnley counter, United tussled the ball back before Fernandes fed the ball to Donny van de Beek who played it forward for Cavani to score.

It was a hard-fought win but this is what United’s championship-winning side’s did best, winning anyway how. They are now eight points behind rivals and Premier League leaders Manchester City and ten points clear of third-placed Leicester City. Burnley, meanwhile, remain a place above the drop zone, six points clear of Fulham, who conceded a 97th-minute equaliser at Arsenal earlier in the day, with a game in hand.