Football
News
The anti-Glazer movement has reached a crescendo in recent weeks
Kris Voakes
13:30, 14 May 2021

There were two more arrests but thankfully a game of football finally took place, albeit 11 days behind schedule, as Manchester United lost to Liverpool on Thursday night. If you think that the fulfilment of the fixture at the second attempt is the end of the story though, you’re very much mistaken.

The protests against the Glazer family by United fans at Old Trafford and other venues around Manchester are not just – as some would have you believe – a commentary on the supporters’ take on the failed European Super League venture. Rather, the developments of the last few weeks have awoken a beast whose head has simply been largely hidden for the past decade and a half.

It is not only those who instigated the formation of FC United of Manchester in 2005 who hate the club’s owners. There are also those who led the green and gold protests of 2010, when United supporters decided to forego the usual club paraphernalia for scarves and banners in the colours of the Newton Heath side which would eventually become Manchester United. And there are many more who, for the majority of the last 16 years, have stayed relatively silent but have found other ways to raise their concerns.

Simply put, the way that the Glazer family bought and have subsequently run the club has not sat well with the United fanbase, and there was always likely to be a tipping point when the quiet complaints and the distribution of ‘Love United, Hate Glazer’ stickers turned into something more substantial. Something more threatening, even.

The attempts to form a Super League have simply brought the ire to the surface. At a time when 75,000 United fans cannot fill Old Trafford as they would normally do, Joel Glazer and his allies took the opportunity to try to disenfranchise every single one of the club’s loyal followers who have built their affinity through decades for some and generations for others. Manchester United became a modern behemoth by proving their quality year after year, not finding ways to exclude those clubs whose shared belief in competition helped to write their history. 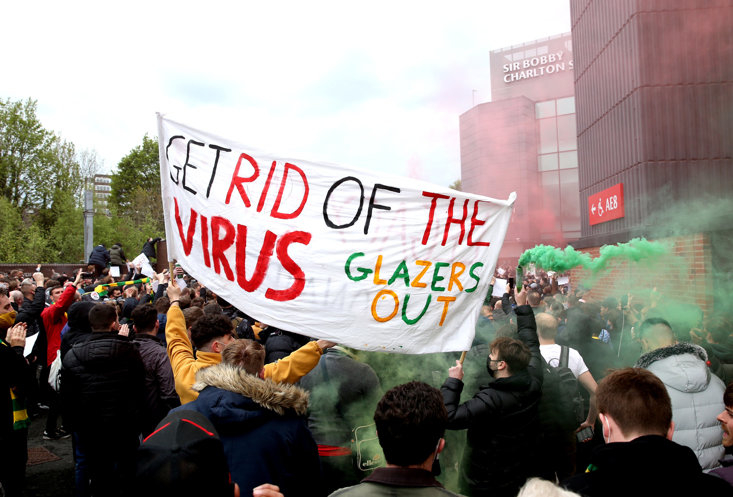 The Glazers, meanwhile, are a family who managed to buy up Manchester United in 2005 with borrowings which they piled onto the club’s debt. According to The Independent, the controlling family have since received £200m in dividends while the club itself has had to cover £1.5bn in interest and debt over the same period. Prior to the takeover, United were not just debt-free but were among the most profitable sporting institutions in the world. This is why supporters have never liked, trusted, or believed in the Glazers.

If people believe the distrust of the owners is relatively new, they simply haven’t been listening. And United fans have run out of patience for those who refuse to hear what they are saying. The Super League proposal is no great surprise to those who have witnessed the Glazers’ tactics at close quarters. Protests and attempts to get games postponed are the latest steps in trying to make the wider audience pay attention to the problem. Those pundits who see the approach as a detriment to the cause might have done well to give the topic their time sooner.

There is said to now be a concern within the halls of power at Old Trafford that further protests could follow, with the types of pictures witnessed in the past fortnight potentially causing great damage to the image United have been trying to convey in recent years. Such an overt lack of harmony is terrible for business, and the Glazers are thought to be genuinely worried about what might come next.

So what should be the next step? At a time when the UK government is attempting to pass a Police, Crime, Sentencing and Courts Bill which would limit protest rights, it has been interesting to see politicians’ responses to football fans rallying against the Super League proposals. But surely it cannot stop there. The continuation of distrust between supporters and those who own and operate their football clubs can only lead to the game heading in the same direction it has been hurtling in for the past 30 years.

Fans need to regain some of the power, and the largely peaceful protests at Manchester United in recent weeks are an example that others should follow as the sport looks to rediscover its sense of moral and community responsibility. Those who decry the intentions of these rallies will only serve to line the pockets of rich, out-of-touch owners still further, and the Super League will be just the start of football’s problems.