Football
News
City and Liverpool are the two best teams in the country, so why does their rivalry not feel special?
Joey Mills
12:05, 11 Apr 2022

Manchester City and Liverpool played out a thrilling 2-2 draw on Sunday, as the country’s two finest football teams battle for the Premier League title. No team outside this duopoly has laid a hand on the famous trophy in the last four seasons, such is the primacy of these two sporting institutions. One of these two clubs has been present in the Champions League final in three of those seasons. Put simply, City and Liverpool are as good as English football gets at this point. But their budding rivalry, forged at the sharp end of the league standings, currently lacks some of the core elements of a classic sporting feud. Liverpool and Manchester City are two excellent football teams, but they are not yet great rivals.

Interestingly, the pair do share a common element with the finest grudge matches in the game. The two cities, separated by a 32-mile stretch of the M62, have shared a long-standing cultural squabble. The music, fashion and art of the North West’s most prominent metropolises have constantly been compared. But in footballing terms, both clubs have greater enmity for Manchester United. The strength of local tribalism has scarcely extended to each other, with both sides sharing a greater adversarial rub with the team from Old Trafford.

The Cityzens and the Reds boast arguably the two finest managers working in the game today. No unbiased mind could concoct an argument against the achievements of Pep Guardiola or Jurgen Klopp. But the nature and demeanour of these coaches, particularly towards each other, illuminates another missing element of this potential rivalry.

Football’s finest quarrels have been characterised by the competing attitudes and philosophies of the men at the helm. Books have been written and films have been made about the ideological warfare between Don Revie and Brian Clough. Endless Sky Sports highlights packages have been carved from the hours of sly digs Arsene Wenger exchanged with Sir Alex Ferguson and latterly Jose Mourinho. Even Guardiola himself has dipped into the dark arts in his own war with Mourinho, from their time fronting the iconic Barcelona-Real Madrid rivalry.

Conversely, Klopp and Guardiola are co-founders of a mutual appreciation society. They admire each other’s style and give the impression they may tour the speaking circuit post-retirement, extolling the virtues of the pressing game. Sportsmanship should be applauded, but it seldom makes for the most viscerally exciting rivalries. 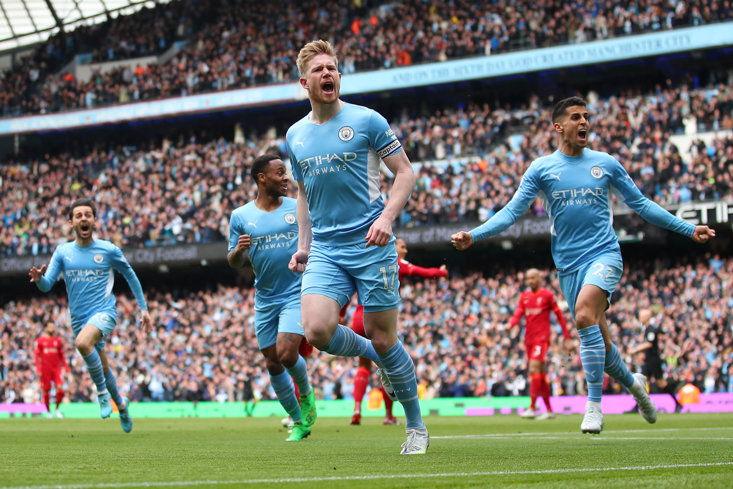 Another element that elevates a competitive battle into a true rivalry is the fierceness of the inter-player exchanges. Roy Keane and Patrick Vieira’s overplayed tunnel spat might have since become the soccer equivalent of Del Boy falling through the bar, but it spoke to the brutality that fired the Arsenal-United rivalry. Like City and Liverpool, they were two teams at the top of their sport. But unlike their successors, they played with an intense dislike for each other borne of the realisation that their opponents were here to take all they held dear. It was this realisation that caused Ian Wright and Peter Schmeichel to be physically separated, that drove Martin Keown to clothesline Ruud van Nistelrooy, and of course set Vieira and Keane on a collision course.

There have been flashpoints in the City-Liverpool duopoly. Sadio Mane’s kick to the face of Ederson in 2017 looms large, even now. There was also a bit of competitive tension on display at the Etihad on Sunday. These elements should only increase the longer these two clubs find themselves jockeying for the same position at the top of the table. More games with high-stakes will bring out the emotions, and the aggressions, of these two sets of players in a way that could elevate this from a mere sporting fixture.

Perhaps it is regressive to view rivalries in this way. Maybe football has evolved and a meeting of two clubs stacked with elite talent should be enough to overcome the BFF managers, the polite players and grudging acceptance the fanbases have for each other. But for a sporting rivalry to endure, history has proven that it needs more than just two world-class opponents. Muhammad Ali shared trilogies with two men in his career; Joe Frazier and Ken Norton. The latter featured the closer fights and the most jeopardy for ‘The Greatest’ but it is the former that has vividly endured. Ali-Fraizer is itself a bi-word for sporting rivalry because of the fierce anger and hatred the pair felt for one another at their peak.

None of this is to denigrate Liverpool or Manchester City. The two clubs have been the runaway leaders of recent Premier League history. As Sunday’s thrilling game suggested, their meetings are to be savoured. But these meetings do not yet comprise a truly great sporting rivalry. Should Guardiola and Klopp continue to oversee an era of two-pronged dominance, this could all change. But for now, Sky will have to keep dusting off Keane vs Vieira clips.