Talk of North West clubs in the Football League has sent shivers down many spines in recent months.

Historic founder members Bolton Wanderers and - most tragically - Bury have dominated conversation due to the severe financial mismanagement of the two clubs when the focus should have ideally been on the expectations of the brand-new league campaign.

The latter club’s 125-year league history was ended abruptly in late August, the Shakers becoming the first side to be expelled from the EFL since the liquidation of Maidstone in 1992. Bolton were eventually rescued at the 11th hour.

Just over six miles away from Bury’s home ground Gigg Lane, League One club Rochdale mercifully provide a welcome relief to a region that was in danger of becoming all too accustomed to clubs becoming embroiled in financial turmoil.

And this week Rochdale are guests of Manchester United at Old Trafford in the third round of the Carabao Cup.

Bolton - fielding a side of youth products as their future remained in the balance - were the Dale’s first conquests in the League Cup campaign, with a 5-2 victory at Spotland. A subsequent win over League Two side Carlisle United has led them to the Theatre of Dreams.

Rochdale have never been in a league position higher than the third tier; Manchester United, Premier League behemoths and record champions sit 53 places above them.

Rochdale chief executive David Bottomley told The Sportsman of the significance of the fixture:

“What is means to the club is that our genuine loyal fanbase - supporters who stick with Rochdale through thick and thin - are obviously very excited about it. It doesn’t happen on a regular basis that we play world-famous names like Manchester United. In terms of heritage of clubs they don’t come any bigger than them.

“It’s also a great opportunity for our supporters and for the team to go to one of the finest sporting stadia in the world and get paid to play, and for all of us at the club that’s the real excitement.

“We have a very young, exciting management team and we have a great group of professional footballers at Rochdale. Team spirit and togetherness is 100% in place.

“We can go very proudly to Manchester United.”

It’s an occasion few Dale players have ever been privileged to be a part of. Former Rochdale player and now Head of Dale In The Community Sports Trust Keith Hicks spoke to the club’s official website about the majesty of the occasion, and the resonance for a footballer and a club, particularly one of a lower league standing. Hicks played an FA Cup tie against Manchester United at Old Trafford in 1986, with United winning 2-0 thanks to goals from Frank Stapleton and Mark Hughes.

“We took about 6000, the buzz was fantastic. We were going to play European Cup winners, FA Cup winners and it’s ‘Little Rochdale’. Looking back now the match was a blur.”

Over three decades later, it’s a position Brian Barry-Murphy’s 2019/20 side also now find themselves in and one that Dale supporters and players will, of course, be relishing; a bittersweet contrast to the fate of their geographical rivals, something that CEO Bottomley sympathises with: “First and foremost as a club we have every sympathy with Bury’s supporters. Without supporters at our level of football, football is nothing. It’s what makes football really tick as a sport.

“All of us at Rochdale, our hearts go out to supporters, the fans of Bury who haven’t done anything wrong, who’ve just gone and watched their football club.” 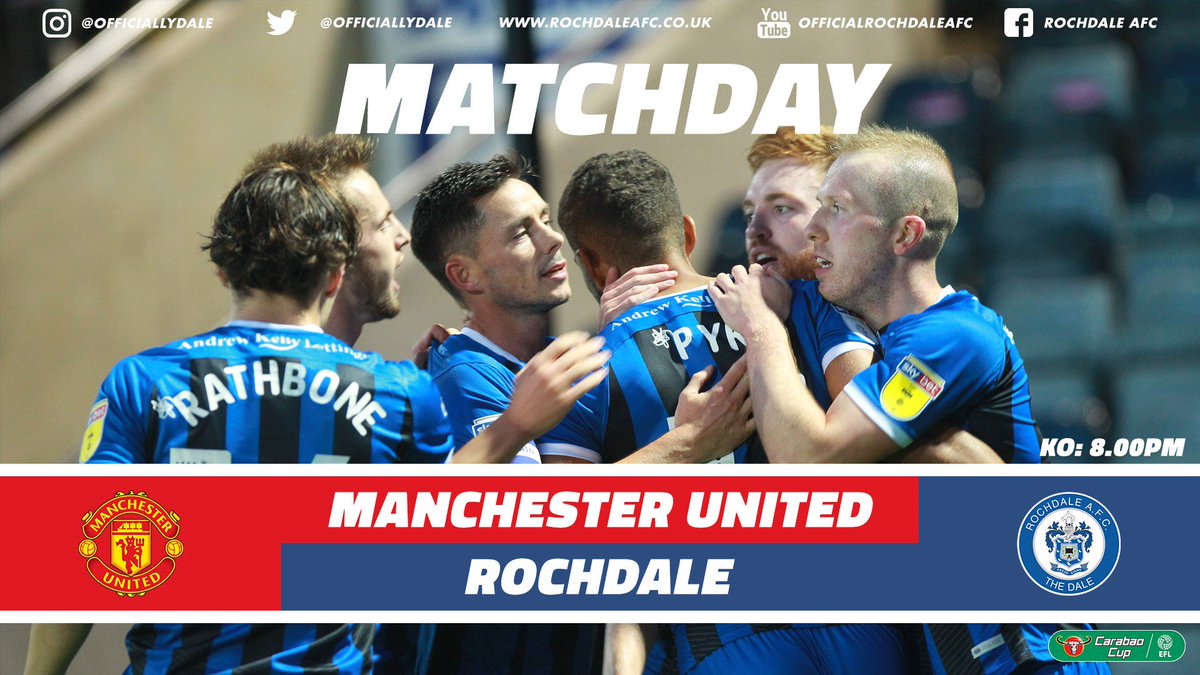 Barry-Murphy’s side’s brand of football is one of the reasons Rochdale are a team to keep an eye on, says Bottomley: "It’s one we haven’t seen in a long time at Rochdale. It’s a possession-based game and when it comes off it works absolutely brilliantly, it excites us all. You just sit there with open eyes thinking ‘This is really great football I’m watching!’ ”

The expulsion of Bury should, of course, continue to be discussed and deconstructed, as should the precipice Bolton and their fans found themselves teetering towards. Rochdale provides an antidote in the region.

“For 112 years Rochdale has had a chairman, a chair, and a group of directors who have felt themselves very privileged to be part of a lovely Lancashire football club.

“We’ve maintained Football League membership while traditional rivals around us - Stockport County, York City and Wrexham - have all dropped out. Our board of directors have always sought financial stability above success on the playing field.

“It’s hard to take sometimes when other clubs around you are overspending and seemingly having more success. It’s quietly knowing that the day of reckoning always comes.

“Rochdale have always avoided that pitfall of chasing success with money it's never had. That’s where we are today.”

Rochdale’s journey towards the upcoming fixture ultimately, however, is a merciful reprieve in the north of Greater Manchester, an area that has threatened to become perpetually tinged with doom and gloom across the current season.

Similarly to Bury - with whom their ‘M66 Derby’ had become a notable occasion - Rochdale have had a strong longevity with the EFL; the club was founded in 1907 and has been part of the Football League since 1921.

Rochdale’s league positions in the past several seasons have been far from spectacular. But good solid management means that a visit to Old Trafford isn’t just a payday, even if there is an obvious financial benefit to the tie. It’s instead a reward, and the swarm of travelling fans to M16 should feel blessed that, unlike the Shakers, their current grounding is solid.

“I hope the people of Rochdale who go to the game at Old Trafford and maybe some fans of Manchester United, enjoy themselves so much and think: ‘You know what, I’m going to go to Rochdale on a Saturday or a Tuesday night and watch the wonderful football that they have.’ 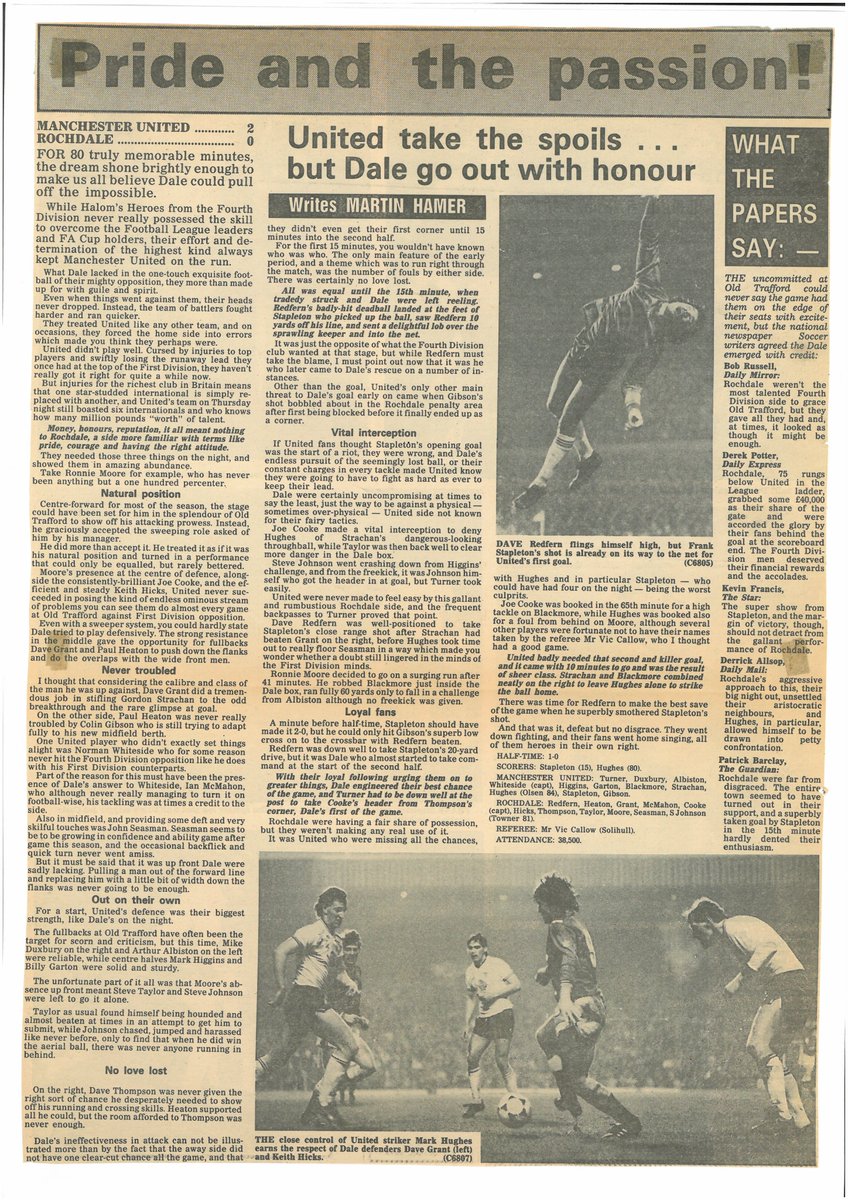 9
22
More
football
The Secret Behind The Success Of Lineker, Shearer And Wright's...
The unavoidable hiatus to the broadcast of the BBC’s flagship football programme will not deny [ ... ]
football
Neymar Jr... Junior! Santos Like The Look Of Ronaldo-Imitating...
On March 7 2009, a slightly-built 17-year-old from Mogi das Cruzes, São Paulo, walked out onto [ ... ]
football
Business As Usual: A Beginners Guide To The Belarus Premier...
If you’re going out of your mind without your football fix, well we’re sorry you just haven’t [ ... ]
football
Why June 30 Could Be D-Day For The Fate Of Premier League Season
England captain Harry Kane has added his voice to the growing calls for the Premier League season to [ ... ]
football
You Heard It Here First - Brescia's Sandro Tonali Is Italy's...
Since winning the World Cup in 2006, it has been turbulent time on the international stage for Italy. [ ... ]
football
A Reunion With Ancelotti Could Resurrect Rodriguez's Stuttering...
No club chews up and spits out world class players quite like Real Madrid. Yet, their sense of entitlement, [ ... ]
football
'Quickly Kevin' Is The 90s Football Nostalgia Podcast To Beat...
While the majority of sports podcasts scramble to fill the minutes within the disruption of the [ ... ]
football
Where Did It All Go Wrong For Phil Neville And The Lionesses?
Winning, Phil Neville recently said at the SheBelieves Cup, is what would bring England’s women [ ... ]
football
''Drop A Few Hand Grenades'' Keegan's Advice To Scholesy The...
A packed out Wembley roared like one of those indomitable Three Lions to greet England’s new messiah. [ ... ]
football
Rise Of The Couch Coach: Coronavirus Causes 119% Surge In Football...
Thousands of us are flocking to virtual reality and gaming to help fill the void of no live football, [ ... ]
football
Review: Diego Maradona - Drop Yourself Into The Great's Chaotic...
When Diego Armando Maradona arrived at Napoli in 1984 for a world-record fee, the entire city ground [ ... ]
football
Arsenal's Tough Choice - Is Donyell Malen The Ying To Aubameyang?
Arsenal’s inability to manage the contractual situations of their biggest stars has plagued them [ ... ]
football
Robbie Fowler Is Making His Mark As A Manager With Brisbane...
The curtains came down on one of the last bastions of football standing in 2020 this week. Before the [ ... ]
football
Long Live The King: Eric Will Always Be Manchester United's...
“If ever there was one player, anywhere in the world, that was made for Manchester United, it [ ... ]
football
I Was There - The Day Football Came Home To Wembley
The closest I ever got to attending the original Wembley Stadium was on its final day in operation in [ ... ]
football
'Sunderland Til I Die' Heads To The Boardroom In Netflix's Second...
The docks have been left deserted. The wealth has dried up. Wearside has become an impoverished place [ ... ]
football
How Chief Creator Silva Became New Face Of Premier League
Football has been cast into uncertainty by the coronavirus pandemic. As it stands, nobody is sure if [ ... ]
football
Lookback:Chelsea 6-0 Arsenal When Arsene's 1000th Game Went...
It was supposed to be an occasion to celebrate for Arsene Wenger, but his 1000th game in charge of Arsenal [ ... ]
football
Ronaldo, Kane, Hazard - The Winners And Losers Of Euro 2020...
So as of this week Euro 2020 became Euro 2021. Another casualty of the global Coronavirus epidemic. [ ... ]
football
Time To Act And Move The Premier League Transfer Window
When my husband had an ear infection, I used my medical knowledge to help him. I said the best thing [ ... ]
football
Southgate Shows Strong Leadership With Rallying Cry To Fans
England head coach Gareth Southgate has sent a rousing message to national team fans as football continues [ ... ]
football
Lookback:Spurs And Chelsea's Eight Goal Thriller
In the three full seasons of Jose Mourinho’s first spell as the club’s manager, Chelsea [ ... ]
football
Take Your Pick - The Premier League Season Ending Scenarios
There are far more pressing concerns than football at the moment, as Jurgen Klopp so eloquently pointed [ ... ]
football
Premier League Clubs Must Be Less Karren And More Klopp Right...
We all know a Karen, don’t we. The proverbial I need to speak to the manager type, and while most [ ... ]
football
PSG Will Never Win Big If They Continue To Be Mentality Midgets
These days, everyone is in need of a laugh, so if you’re not aware of the @NoContextHearn account [ ... ]
football
Blackpool, Video Games And Escapes - How Footballers Have Dealt...
That date of April 3 for the Premier League to resume is looking increasingly optimistic day to day.  [ ... ]
football
Here Are The Meetings That Will Shape A Pivotal Week In The...
Coronavirus has completely destroyed the sporting calendar and led to most events being either completely [ ... ]
football
Elbow Bump! Leyton Orient Are Using FIFA 20 To Bring The Football...
With almost all football suspended for the next few weeks and with boredom already creeping in, one [ ... ]
football
Premier League Hall Of Fame Event Cancelled Due To Covid-19...
The Premier League’s first two inductions into a new Hall of Fame are set to be postponed after [ ... ]
football
Sancho’s Time At Dortmund Made Him A Pioneer - Jude Bellingham...
Results haven’t shown it, and there are fair questions surrounding his tactical approach and leadership, [ ... ]
This website uses cookies
Cookies help us and our partners provide statistics. By browsing this website, you consent to the use of cookies in accordance with our Privacy Policy and Cookies Policy.
Accept & Close