Football
News
The owner of the Italian club has threatened to sack all his players for disobeying orders
Rebecca Knight
15:58, 13 Nov 2019

The English media has been awash with drama over the last couple of days – well, drama by their standards, after Raheem Sterling was dropped from the England squad to face Montenegro because of a bust-up with Joe Gomez. While Liverpool living rent-free in the heads of everyone associated with Manchester City is a point best talked about on another day, the huge fall out that came from the England duo having words is on everyone’s lips.

The Italian media must find that hilarious. The biggest bit of drama we have to talk about is a couple of players having an altercation that is best described as handbags and claws coming out, literally if Gomez’s face is anything to go by – and they’re now on good terms once again. Over in Italy, they have real drama to talk about – in fact, it wouldn’t be out of place in a reboot of Footballers’ Wives.

Napoli owner Aurelio De Laurentiis has not only threatened to sell the entire playing staff and sack his manager to boot, but he’s also considering cashing out on the club as a whole after getting an offer from Qatar, with the Al-Thani family thought to have made contact.

Let’s recap before we go straight into the plot of the series finale. Napoli were supposed to be title challengers this season, and had gone out in the summer and spent well, seeing the managerial changes at Juventus and Inter Milan as a chance to finally get their holy grail of the Scudetto. However, it’s not gone as planned, and after disappointing results, a training camp of sorts, a ritiro  – common in Italian football when things aren’t going well – was ordered by De Laurentiis.

However, the Napoli players and manager weren’t keen on being told to sit on the naughty step for time out, and the situation has escalated from that point so badly that even Supernanny wouldn’t be able to fix it.

Manager Carlo Ancelotti came out and said he didn’t think the camp was necessary. The players decided to go home after their Champions League game against Red Bull Salzburg and ignored the president. De Laurentiis lost the plot totally, put his star men up for sale this January and said he would sell them all unless things went his way. If Toys R Us went around collecting the items thrown out of various prams during the last month at the club, they wouldn’t need to order stock for the next decade.

Legal action has been threatened by the president and the players, who contacted their own lawyers after refusing to return to the training camp. Threats over wages being docked 25% were also issued. To summarise, it is chaos, and the ever-professional Carlo Ancelotti has had enough of being part of a circus. 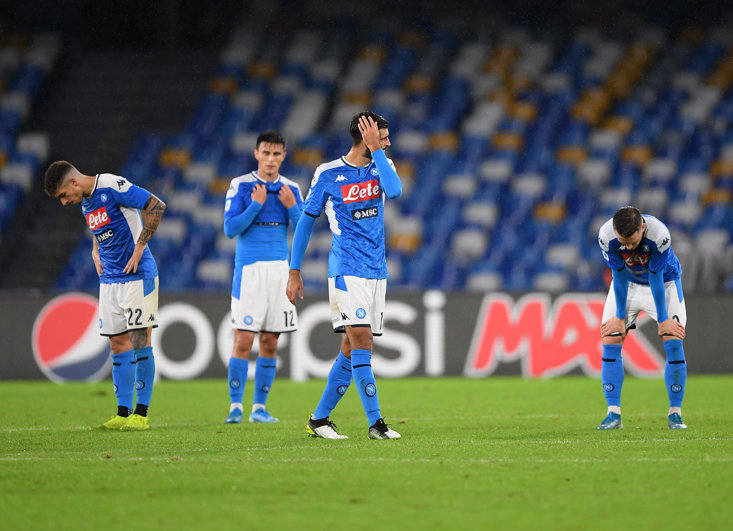 The fans aren’t too thrilled either – in an open training session held by the club and the recent game, they made their feelings abundantly clear, and Brazilian Allan’s wife posted about quite frankly terrifying incident on her social media page, saying their house had been ransacked by Napoli fans as punishment for Allan being one of the ‘ring leaders’ of the situation – while her kids were there and she was heavily pregnant.

Naples is a passionate city. One of the most passionate in the world when it comes to football, but the emotions are boiling over to the point of no return at the minute. De Laurentiis is no stranger to criticising his players or manager. He called Maurizio Sarri a ‘communist’, launched a tirade against Rafa Benitez and has never truly seen eye-to-eye with Carlo Ancelotti.

So-called ring leaders Dries Mertens, Lorenzo Insigne, Jose Callejon and Allan have been blasted by him as well, with the latter reportedly furious and feeling offers from other clubs were kept from him in the summer gone by, in order to trap him at the club. Even star defender Kalidou Koulibaly has been told he can leave in the summer. It’s mutiny on all sides, with the players currently forced to hire bodyguards and several family members leaving Naples – with captain Insigne’s wife thought to be one who has left, such are the safety concerns in a volatile situation with the owner only pouring more gasoline on the lit flames.

De Laurentiis might have a flare for the dramatics, but this isn’t going to end well for anyone if things carry on escalating the way they are – and the players know it. However, De Laurentiis seems set to dig his heels in and ‘sell the entire squad’ if he deems it necessary.

For a guy who’s made his money in movies, it seems De Laurentiis’ greatest achievement at Napoli may well be turning them into a club worthy of a film saga.