Seventeen years in any professional sport is a long time. Seventeen years in Rugby League is an eternity. When Michael Shenton made his Castleford Tigers debut in 2004, he surely could only have dreamed of the journey he would go on in that period.

Thursday night will be Shenton’s 400th career game. It will also be his last at Wheldon Road, the place where he has written his name into rugby league folklore.

The Castleford Tigers captain confirmed this week that he will retire at the end of this season, but before then he faces one last challenge at the Jungle as the Tigers look to qualify for the Betfred Super League play-offs against Warrington Wolves on Thursday.

The West Yorkshire side have blown hot and cold this season, but they’ve shown enough in the second half of the season to suggest they could still have a big part to play in the story of this season as Shenton and long-term coach Daryl Powell look to sign off by filling in the missing piece from their combined time at the club.

If you google Michael Shenton, or take a quick scan across his Wikipedia page, it’s fair to say that the words ‘runner-up’ feature more prominently that he would like. Two losses in Betfred Challenge Cup finals with the Tigers, two defeats in Betfred Super League Grand Finals, one of those with St Helens, and a runners-up medal with England in the 2009 Four Nations paint the picture of a perennial nearly-man. But it doesn’t tell the story of Shenton’s stellar career.

It’s easy to forget, when you look at what the Castleford club has become under the stewardship of Powell, that not 15 years ago, the Tigers were not Super League play-off regulars, but were instead in National League One as it was then.

In Shenton’s first season as a regular starter, he was a key part of the Castleford side that earned promotion, thrashing Whitehaven in the 2005 National League final, as well as reaching the final of the Northern Rail Cup. 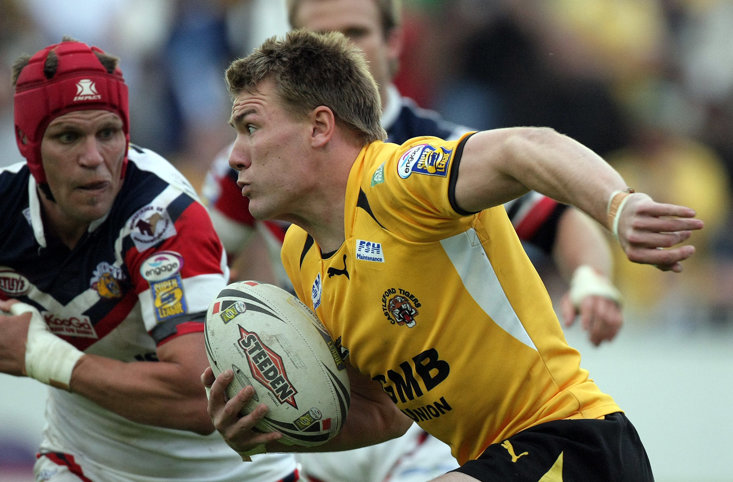 A YOUNG SHENTON RUNS AT THE WAKEFIELD DEFENCE IN 2008

The following season was ultimately disappointing for the Tigers as they suffered relegation in their first year back in the Super League. It was a breakout year for Shenton, however, and by the time Castleford were back at the top table in 2008, Shenton had established himself as one of the best young centres in the game.

This time, the Wheldon Road side’s stay in the Super League was a long-term one, with licensing now in place, and Shenton was quite literally at the centre of everything they did as they slowly started to re-establish themselves as one of the game’s big-hitters.

The Tigers finished bottom again in 2008, but Shenton’s fine personal performances earned him his first England cap against Wales, and in 2009 Castleford were back in the play-offs.

A change of scenery followed for Shenton as he moved to St Helens for two seasons, before returning to Castleford in 2013.

And this is, perhaps, where the foundations of his legacy at Castleford Tigers really lie.

By this point Shenton had confirmed his place as one of the top centres in the Betfred Super League, an England regular with Grand Final experience under his belt, he was now the cornerstone of the Tigers side and was given the role of club captain. Daryl Powell was now in charge, a young Rangi Chase was making a name for himself, and things were starting to really look up for Cas supporters.

A first trip to Wembley in 22 years followed in 2014, before everything clicked in 2017 and the Tigers took the Super League by storm, winning the League Leaders’ Shield at a canter, though of course, we all know what happened at Old Trafford.

Cas have made the play-offs every year since, and returned to Wembley in 2021. If you’d have asked me at half-time if I thought Michael Shenton would be the captain to lift the trophy, I’ll happily admit I would have said yes. Alas, again they fell short. 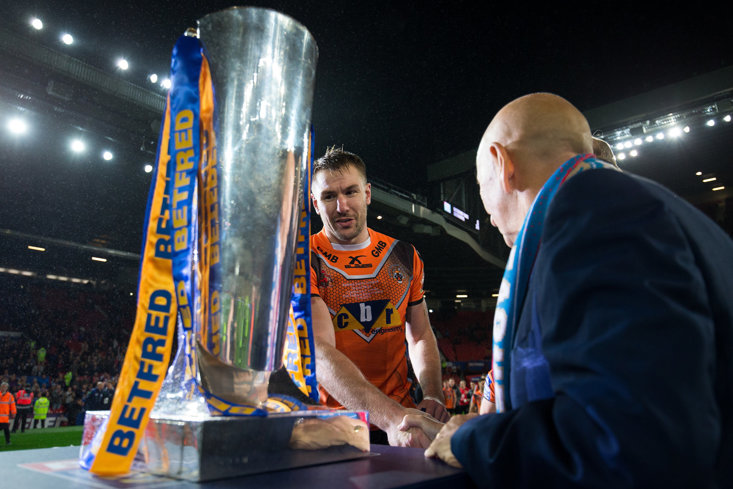 SHENTON GOT TANTALISINGLY CLOSE TO THE MAIN PRIZE IN 2017

In just a few years, however, Cas had gone from Super League strugglers to top-six regulars and perpetual entertainers. The ‘Classy Cas’ moniker has been restored, and Michael deserves a lot of personal credit for that alone.

So whilst Shenton won’t be looked back on as a player who regularly lifted trophies, he will be remembered as the absolute model of consistency, a man whose bad games could probably be counted on one hand, and a captain who Castleford have built, and then re-built, their squad around on multiple occasions.

Those are just the headlines as well, there are so many fascinating sub-plots to his career. Would Denny Solomona have scored 40 tries in 2016 if he hadn’t been outside Shenton? Probably not. Would Eden have scored 38 the year after? Same answer.

Now that his future has been confirmed, I’m sure there will be quite a long queue of wingers lining up to thank for every time he put the ball on a plate.

Quite often overlooked and criminally underrated, if Michael Shenton was hanging up his boots with a handful of Grand Final rings, a couple of Challenge Cup medals, and even a Man of Steel award, you’d be hard pushed to say it wasn’t deserved.

There’s one last chance to remedy that, of course. If you look at the cold, hard facts, you’d have to say that Castleford are rank outsiders. They’re already into knockout football, and if they come through the game against Warrington, they face the toughest possible route to Old Trafford, with all their games away from home.

The thing is though, sport, and rugby league in particular, has absolutely no respect for cold, hard facts. Let’s allow ourselves to get all romantic just for a second. Daryl Powell and Michael Shenton bowing out as Grand Final winners would be one of the greatest rugby league fairytales of all time.

And it could happen. Castleford have already shown on numerous occasions that they can beat any side in the league, and they have no shortage of motivation.

If it doesn’t happen, thank you anyway, Shenny. You are retiring a legend.