And then there were eight…

The round of 16 at Winter Gardens has wrapped up, and we are left with eight men fighting it out to be crowned the new Betfred World Matchplay champion. It seems fitting that some of the most exciting darts in recent history were saved for when crowds were allowed back, and the Blackpool fans were treated to several classics this warm Wednesday night. Enough of the teasing, let’s get down to business.

Jose De Sousa was one of the undoubted favourites to win the Betfred World Matchplay but was on the wrong end of a thrilling Michael Smith comeback. Smith, who has frequently failed to deliver on his obvious promise, battled back with an average of 99.7 to come to win the tiebreak 13-11.

‘Bully Boy’ looked out of sight when he stormed to a 5-2 lead, only for De Sousa to win the next three legs to level the scores. ‘The Special One’ then registered the next break to take the lead himself but suffered from one of his famous miscounts to open the door for his opponent. 8-6 became 9-7 to the pre-match favourite, and De Sousa was on the brink of reaching the last eight.

Not to be denied, Smith recovered from 10-8 to force a tiebreak – the first of the tournament – that saw both men immediately break each other, and the Portuguese man miss a match dart. At 12-11 to Smith, De Sousa squandered two opportunities to prolong the encounter, and the St Helens man finally nailed a double ten to take an incredible victory.

What a way to start the night at Winter Gardens!

Clearly keen to continue with the drama, Gary Anderson and Nathan Aspinall then served up an instant classic in game two in a fantastically topsy-turvy clash. Nathan Aspinall hit an astonishing eight 180s to hold his nerve in defeating Gary Anderson 11-9, although that only tells a small part of the story.

Anderson, who has confessed to not being at the level he once was, did actually reach the World Championships final back at Christmas, proved once again how his game improves in front of a packed crowd and played his part in a stunning battle. 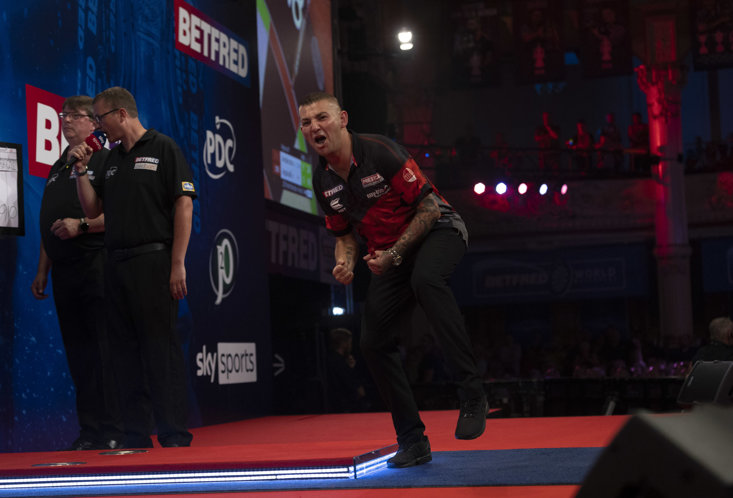 3-0 down and looking in trouble, the 50-year-old won four unanswered legs to take a slender lead, but it would prove to be the last time he had the upper hand on the scores. ‘The Asp’ moved two clear at 6-4 heading into the interval and looked to be on his way to a routine victory when 8-5 to the good. However, ‘The Flying Scotsman’ fought back to 8-7 and then 10-9 as we looked to be heading towards another tiebreak.

It wasn’t to be, as Aspinall won the 20th leg to reach the quarter-finals for the first time in his career.

At 10-6 up, you’d be forgiven for assuming that Michael van Gerwen was on the brink of booking his first World Matchplay quarter-final spot since 2017. The two-time winner was forced to hold off on his celebrations, as Ian White won the next two legs to mount an unlikely comeback. The late pressure was short-lived, as ‘MVG’ wrapped up with a 121 finish on the bull to keep his hopes alive.

There wasn’t much to choose between the pair in the opening visits, with breaks being shared as the Blackpool crowd revelled in the 5-5 scoreline. From then, ‘Mighty Mike’ took over and showed the rest of the tournament why he remains a serious contender. The Dutchman did miss an astonishing six match darts as nerves seemed to be getting the better of him, but he finished off in style to book his spot in the last eight.

Former world champion Peter Wright has previously claimed that he is going to win the Betfred World Matchplay event, and got his last 16 clash with Joe Cullen off to the perfect start by taking a 3-0 lead. Cullen cut the early celebrations of his opponent short by winning the next three to tie the match, only for Wright to take control in building a formidable 8-3 advantage.

Cullen did stop the rot of five straight Wright legs to reduce the deficit to 8-4, but ‘Snakebite’ bit back immediately to make it 9-4. ‘The Rockstar’ won his final leg before Wright saw out the night with two more to romp to a hugely impressive 11-5 victory.

He has a lot to do before his prediction of glory comes true, but performances like that will fill him with confidence.