The good times are returning at the oche as a packed Winter Gardens roared their heroes on in what was another memorable night of World Matchplay action.

Let’s take a look at who made it through to the last eight in another firecracker night of darts in Blackpool.

Cross reigned supreme at Winter Gardens the last time crowds were allowed inside the arena and looked set to book his spot in the last eight in front of a full house when he recovered from an early 2-1 deficit to take a 5-2 lead after four unanswered legs. Rydz, who was on the wrong side of a tight 6-5 result when the pair last met, was determined to fight back, and did just that with five unanswered legs of his own to take a 7-5 lead.

A 180 appeared to have handed the momentum to Cross to bring the scores back to 8-9, but Rydz held his nerve to hit a pair of treble 20s and a bullseye to move to within one leg of progression. A shaky visit from both men saw nerves entering the fray, but the 23-year-old finished the tie with tops and sealed what is without question the biggest win of his career.

Luke Humphries and Krzysztof Ratajski were arguably the two standout performers in the opening round and looked like they were going to serve up another cracker with the Polish Eagle 5-4 up after nine legs. A 4-0 and then 5-1 lead threatened an early finish in game two, but Humphries, roared on by his home crowd, fought back to remain in the contest.

‘Cool Hand Luke’ has enjoyed something of a breakthrough year after reaching the UK Open final back in March, beating Michael van Gerwen in the process. He promised more of the same after his victory over James Wade in the first round here in Blackpool, but despite producing some excellent moments, came up against an inspired Ratajski who romped to an 11-5 victory.

His quarter-final clash with Rydz promises to be a fascinating one.

The reigning world champion versus the Premier League champion – this one had the makings of a classic and promised to be the game of the night.

If the bookies were struggling to split the two, Price had not read the script as he sent out a statement win at a pace that the likeable Clayton just couldn’t live with. The World Cup-winning teammates were level at 3-3 and the adoring crowd were loving the back-and-forth action. However, Price, who hadn’t reached the last eight here since 2015, put his foot on the gas to win the next eight legs and romp to an 11-3 victory.

Are we looking at the man to beat? This kind of blistering form would suggest just that. 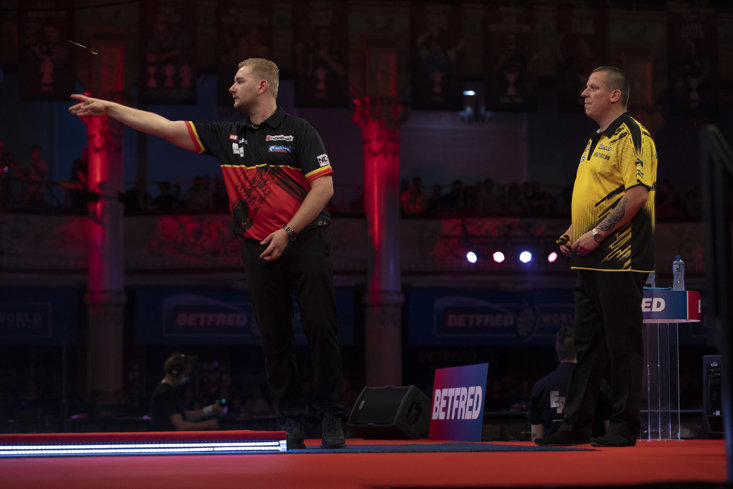 Both Van den Bergh and Dave Chisnall absolutely love a 180, and didn’t disappoint here with maximum visits being shared out from the off. Amazingly, it took until the 10th leg for the first hold of the encounter, with the pair exchanging breaks in yet another barnstormer.

The Belgian managed the first hold to build up a 6-4 lead and looked primed to extend that advantage after consecutive 180s (see what we mean?), only to miss out on the nine-darter and open the door for Chisnall to strike back. In a match of breaks, ‘Chizzy’ answered yet another Van den Bergh maximum with one of his own before finishing on the bullseye to level the scores at 6-6 in a truly staggering contest. Increasing his lead to 9-7, the reigning world champion missed three attempts at double 20 to take a 10-7 lead but did just that at the second time of asking after Chisnall failed to capitalise.

Chisnall threatened a comeback by taking the next leg, but ‘The DreamMaker’ held his nerve to set up a mouth-watering last-eight clash against the rampant Price.