Football
News
The Dutch star has scored against all 14 opponents she has faced in the top flight
Conor Keane
14:43, 21 Nov 2021

Vivianne Miedema has become the first player ever to score against every Women’s Super League side she has faced after netting the crucial opening goal in Arsenal’s 2-0 victory over Manchester United at Leigh Sports Village.

The Dutch international fired in her sixth goal of the season on an afternoon in which the Gunners showed they are becoming an increasingly unstoppable force in WSL under Jonas Eidevall with each passing game. And Miedema has played her part perfectly in his revolution.

The league’s record goalscorer with 66, she also holds the records for most goals in a season with 22, the most WSL hat-tricks with five, and the most hat-tricks in a season with three. In total, the former Bayern Munich striker has scored over 100 goals in all competitions for the Gunners since she joined the club in 2017. Since the start of this summer’s Olympic Games, the 25-year-old has scored 25 goals in 23 appearances.

Miedema has such a strong influence on her side, but collectively their results and performances have been by far the best in the league and they still boast an unbeaten record after eight games. Only Emma Hayes’ reigning champions Chelsea appear to offer a threat in the hunt for their first title since 2019.

Marc Skinner’s United side had their moments in the game, but overall they could not match the quality and intensity of the visitors as the gap between the top two and the rest looked as wide as ever. When Arsenal had their best openings, they made sure they capitalised on them, whereas United squandered theirs. It underlines the heavy task the former Birmingham boss has ahead of him at LSV.

It is worth remembering that there were several outgoings from United in the summer – not least his predecessor Casey Stoney – and the 38-year-old has got plenty of rebuilding to do. We have already seen glimpses of the way he wants his side to play and once he is able to reshape his squad, they will surely start to reap the rewards. They have done rather well so far this campaign given the turnaround in the summer, with this defeat being only their second of the season.

Arsenal Women
@ArsenalWFC
Another 𝐁𝐈𝐆 win for The Arsenal! 🤩 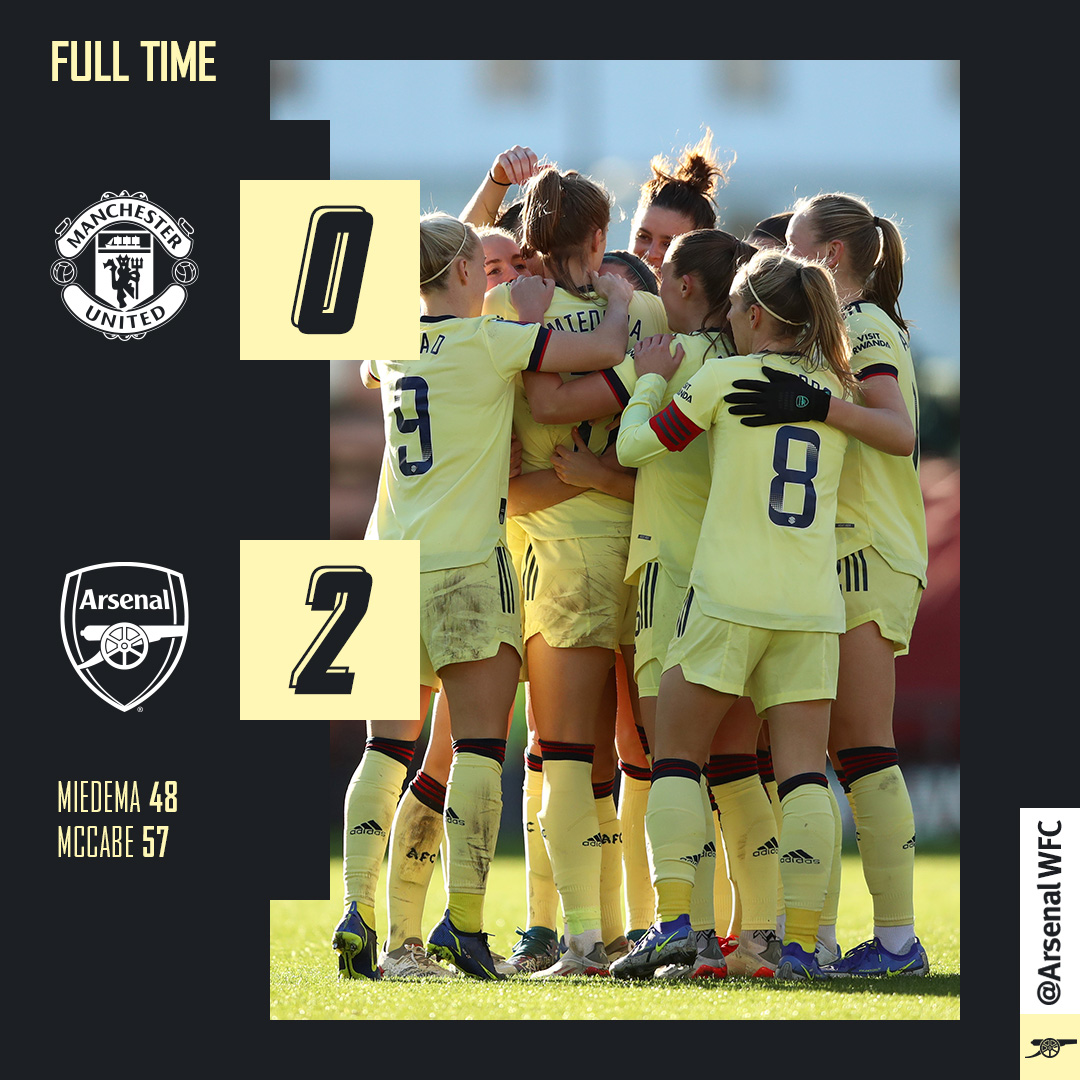 United were seeing more of the ball in the opening stages, but the first clear-cut chance of the game came from Arsenal. Kim Little made a brilliant defence-splitting pass down the left and after some lovely build-up by Katie McCabe, Beth Mead’s effort rattled the crossbar. The Gunners grew into the game and were the side applying the most pressure but they lacked the cutting edge in the final third in the first half.

Eidevall’s words clearly had an impact on his side at the break because it only took them two minutes to find an opener through Miedema with a low-drilled finish. That goal was a special one for the forward as it meant she became the first player in the WSL to score against every side she has faced in the division. She then nearly had a second after a nice break down the right, but she couldn’t meet Mead’s pull-back.

The pressure was mounting on United and it got worse when Aoife Mannion conceded a penalty for a challenge on McCabe. The Irish attacker converted from the spot to double the Gunners’ lead and record her fourth of the season. Skinner’s players were able to rally and have a positive phase in the game but their best chance of the 90 minutes was saved by Manuela Zinsberger as she denied Katie Zelem, who had been found brilliantly by Lucy Staniforth.

It proved to be a comfortable seventh victory of the term for the Gunners and their lead at the top of the table has been extended to four points to apply the pressure on champions Chelsea.