It has been a long time coming but Patrick Bamford has finally got his England call up and the Leeds United striker has fully merited his selection.

When he signed for Marcelo Bielsa’s side in 2018, his game developed at a staggering pace which has brought him to where he is now. Bielsa’s training and vision has been widely praised from outsiders looking in, especially for the impact he has had on players like Bamford.

The Argentine has moulded him into one of the fiercest strikers in the Premier League and he is now a key cog at the West Yorkshire outfit. Bielsa knew he had a goalscorer on his hands but also that he needed to tweak him to unlock the best version. Not only has he made Bamford and his teammates incredibly fit and well-drilled, he has turned Bamford into a deadly finisher and creator. He combines the attributes of a traditional centre forward with the attributes of a midfielder, similarly to how Roberto Firmino plays at Liverpool – except Bamford grabs more goals.

It’s a testament to the impact Bielsa has had on the Grantham-born star but credit is also due to Bamford for thriving off the demands of his gaffer. The player he has evolved into under the guidance of Bielsa has taken to the Premier League like a duck to water. In Leeds’ first campaign back in the top-flight, the 27-year-old scored 17 league goals as The Whites finished ninth.

It’s not just his goals that have helped him earn his phone call from Gareth Southgate, it was his pressing too – once again showing how fit Bielsa makes his players. The way he works tirelessly off the ball as much as he does on it, is exactly why he is fully deserving of this international call-up - that spirit, ability and desire will provide a huge boost to the England boss for this collection of fixtures.

Bamford’s journey to the top hasn’t been the easiest with stability lacking in his career for much of his younger years. Bought by Chelsea from Nottingham Forest in 2012, Bamford was cast out like many of the club’s youngsters into the lower leagues as there was no direct route into the Blues’ first team. After a breakthrough loan spell in League One at MK Dons in 2012/13, the forward scored 18 goals in 37 appearances and he seemed destined to reach the Mount Olympus of English football, the Premier League, eventually. 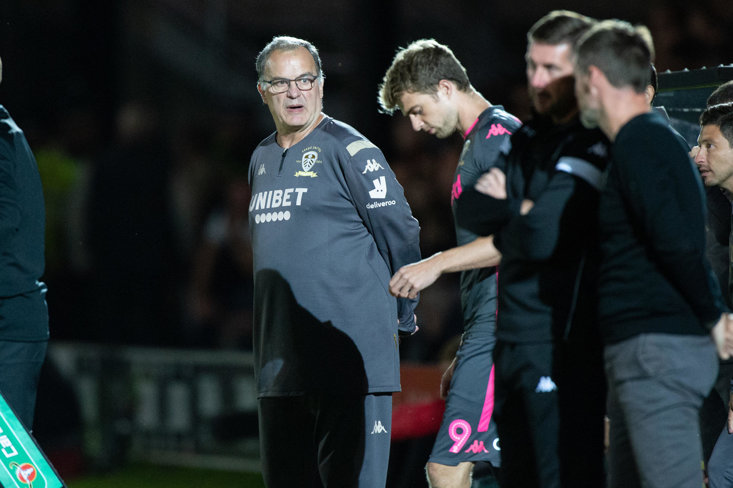 In 2014 he joined Forest’s bitter rivals Derby County on loan where he continued to find the back of the net, though he was not as prolific as he would have liked, scoring eight in 21 appearances. He rediscovered his golden touch on loan at Middlesbrough the following season where he scored 17 in 38 matches and his form caught the eye of Premier League suitors. His first crack at the top-flight was not a pretty sight, though.

In the 2015-16 season he was sent to two different clubs, first Crystal Palace and then Norwich City. He failed to make an impact at either, drawing blanks in both South London and East Anglia, but that was through no fault of his own. The stats reflected poorly on him but as a player who is constantly changing clubs each season, it will be difficult to perform at your best. After another goalless spell on loan at Burnley, he moved back to Middlesbrough permanently and scored 12 in 47 matches before joining Leeds where he has since flourished.

A player who has had the patience with a number of loan spells which ultimately restrained him from being able to settle at a club for so long, is now reaping the rewards of his move to Leeds and he will be grateful for the player he has been moulded into by Bielsa and his own work ethic.

There’s no question that he will offer a different dynamic to England’s forward line should he make an appearance for the Three Lions against Hungary or Andorra this week.