Naiqama scored once in each half to lead the Saints to victory, leaving the Dragons heartbroken after a season in which they were worthy winners of the League Leaders’ Shield.

In what was an occasionally scrappy but always dramatic contest, Saints overcame the loss of Tommy Makinson to a second-half sin-binning to claim a ninth Super League title.

Saints suffered an early scare when Sione Mata’utia’s punch on James Maloney in back play was not spotted by referee Liam Moore, but the Dragons were ahead moments later when Maloney kicked for two after Saints were caught offside.

Kristian Woolf’s side were first to cross the line though as Naiqama showed quick feet and great perseverance to beat four Catalans defenders and plonk the ball down from his back as Saints, not for the first time, shifted the ball right to great effect.

While Lachlan Coote missed the conversion, he gave his side a 6-2 lead after Benjamin Garcia went high on Jonny Lomax, although Maloney kicked another penalty to halve the deficit going into the break. 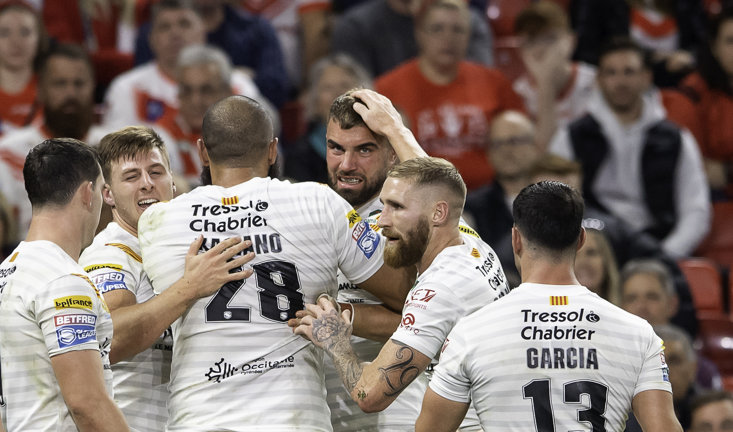 A key moment in the game came early in the second half, when was sin-binned for a high tackle on Fouad Yaha just as the French winger looked destined to score in the corner from a perfect Josh Drinkwater kick. Despite the penalty try not being awarded by video ref James Child, Catalans were able to build pressure and Drinkwater would have another big say shortly afterwards.

First the half back put them into Saints territory with a brilliant 40/20, then he sent a kick high into the corner which Regan Grace failed to deal with, leaving Mike McMeeken to pounce for the Dragons’ first try of the game. Maloney’s conversion from the touchline gave Catalans a 10-6 advantage with St Helens still a man light.

After Makinson returned it looked as though he would be part of a Saints leveller, but after Joe Batchelor raced clear down the right his ball inside for the winger was collected instead by Man of Steel Sam Tomkins to snuff out the danger for the Dragons.

The reprieve would be temporary though, as Naiqama went in for his second try of the game after timing his run to perfection to meet Lomax’s kick and dive over. While the two-try hero had to leave the field after a challenge from Yaha in the act of scoring, Coote put Saints back in front from the tee with 13 minutes to play.

With Catalans looking to get back in front late on, two huge errors at either end of the field proved costly. First Sam Tomkins spilled an inaccurate Maloney pass under pressure from Jack Welsby as the DRragons attack, then Tom Davies spilled the ball from an attempted touchfinder.

From there St Helens showed all of their Grand Final experience to see out a nail-biting 12-10 success, with an emotional Naiqama being handed the Harry Sunderland Award by the daughter of Super League legend Rob Burrow after the final hooter.