It is hard to believe that Napoli were only reborn in their current form in 2004, President Aurelio De Laurentiis purchasing the club following bankruptcy under their previous owners. The film executive refounded the club under the name “Napoli Soccer”, but swiftly restored the original title Società Sportiva Calcio Napoli just two years later. The Partenopei returned to Serie A for the 2007/08 season and have not looked back ever since.

Now under the stewardship of Coach Maurizio Sarri, Napoli have emerged as Scudetto contenders, finishing second and third respectively in his first two seasons in charge. This term, his side have continued their brand of attractive football and for the first time look set to press six-time champions Juventus all the way. The Neapolitans remain the only side to have won each of their seven matches in Serie A so far, having scored 25 goals in the process

Lorenzo Insigne has provided two of those league goals, in addition for four assists for his team-mates and remains an icon at the Stadio San Paolo as the only Naples-born player in the side. The season before he scored a career-high 18 goals, but the 5”4’ winger has revealed he nearly didn’t make it.

"At one point, I wanted to quit football, as the scouts all told me the same thing and I thought it might be futile to continue. Then I had a trial with Napoli and it went well,” he told UEFA.com. "Being the only Neapolitan in the squad, it can happen that the fans expect something more from me. I remember when I was a child and there were 70,000 fans in the Stadio San Paolo for a Serie C game. You don't see that anywhere else.

"For a Neapolitan, wearing the Napoli jersey, it's not something that happens every day. I hope that other young Neapolitans can, like me, make these childhood dreams come true."

The good news for the youngsters that Insigne is talking about is that Naples is producing young footballers that are making it into Italy’s top division. There are currently 22 players in Serie A born in the region of Naples, second only to Rome, the capital heading up the chart with 28. Whilst the Napoli star is the flag-bearer for that group, the list also includes the likes of Ciro Immobile and Gianluigi Donnarumma. 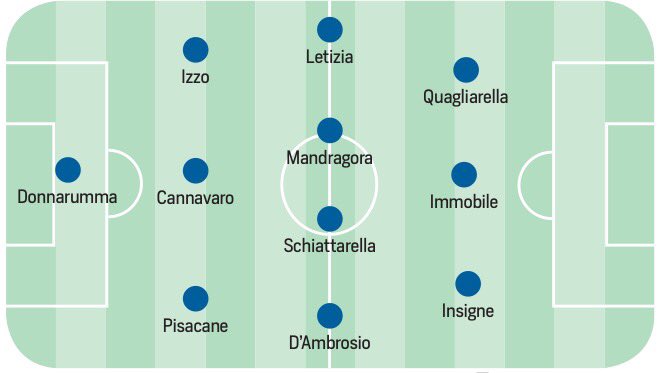 Such is his talent, the latter has been hailed as the eventual replacement for Gianluigi Buffon and 27-year-old striker Ciro Immobile is enjoying the best form of his career at Lazio. Then there are veterans Marco Borriello, Fabio Quagliarella and Paolo Cannavaro, all of whom have enjoyed bountiful careers on the peninsula.

The next city on that list is Milan with 14, while Turin, Florence and Genoa are lagging behind with only seven each. You would expect the capital to be the most plentiful, so what is the secret to Naples’ success? The answer can be found in a recent report published by Italy’s Corriere dello Sport newspaper which details figures of excellent work with youth in the Campanian city.

Passion for the game is developed on the densely-populated streets, a city where you can see football culture at every turn. The game is a way of life for its people, reflected in the numbers of current Serie A players born in the region. Figures produced by Italian football governing body FIGC indicate that there are 715 youth sides in the region of Campania, more than Lazio which houses the two Rome clubs and Lombardy which contains Milan, Inter and Atalanta.

Chloe Beresford
@ChloeJBeresford
Naples producing a good number of young players, not a surprise in a city where you can find football culture everywhere in the streets

So we not only have the current Napoli side to thank for entertaining us in recent years, but the region of Naples for providing such a wealth of young, hungry and talented players.