Football
News
So many of the Catalans' current issues can be traced back to the Brazilian's departure
Rebecca Knight
11:30, 27 Nov 2019

Not since the days of Ross and Rachel have we seen a greater ‘Will they? Won’t they?’ than Neymar and Barcelona.

They’ve been off, on and off again over the last few years and while they were on a break after Neymar went to Paris Saint-Germain, Barcelona even tried to sue him. Time, as they say, is a great healer and all they want is to be back together again.

Neymar isn’t happy in Paris, and has run into issue after issue. He is bored of the league, is missing his friends and, of course, has been injured on plenty of occasions. He’s fallen foul of the fans as well – in quite spectacular style, and really, the only thing he’s kept consistent since moving is his dedication to attending his sister’s annual birthday party.

Barcelona, meanwhile, have toiled without him, and their key man, Lionel Messi, has made it very clear he wants Neymar back at the club. So too have other key players, with Luis Suarez and Gerard Pique thought to also want the Brazilian to return. Of course, that’s not happened so far, and the forwards who have come in to be the third wheel in the front trio have struggled.

Ousmane Dembele has had a torrid time, but it was Antoine Griezmann the club pursued over the last couple of summers – finally getting their man last time out – and who they wanted to make Barcelona Great Again as part of a Messi, Suarez, Griezmann triumvirate. Sadly for MSG, this is the age of clean eating and veganism, and they’ve not taken flight quite like the MSN – far from it. It’s been pretty dire for the most part, with the lack of rhythm between the three worse than a novelty act on Strictly Come Dancing.

It’s been painful to watch, and for the most part it’s actually looked as though Messi in particular has more interest in filing his taxes than he does including Griezmann in the game. Of course, if Messi doesn’t like playing with you, or you don’t gel well with him in terms of personality, you’re not going to make it very far at Barcelona, and it’s clear that’s the case at the moment with Griezmann. 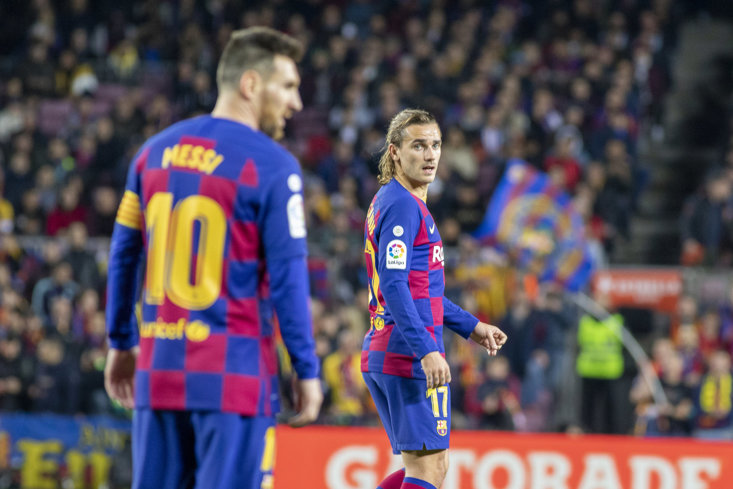 The Frenchman is essentially the partner Messi’s parents told him would make a suitable wife, and he’s currently being forced to court them in an engagement that makes everyone wince. Messi is still batting his eyes at his preferred partner as well, making plenty of comments about just how much he’d like to see Neymar back at the club and how Neymar was the one all the players wanted this summer.

So much so, that some of the players reportedly agreed to delay bonuses and payments promised to them in their contract to make the FFP situation for Barcelona easier and facilitate the return of Neymar. That didn’t happen, and now the entire club are suffering for it, with Ernesto Valverde in more peril than a turkey in the run-up to Christmas.

Of course, Barcelona have plenty of other issues as well – key players aren’t getting any younger, their defence is leakier than ever and the midfield conundrum seems to baffle Valverde, with the manager struggling to pick his best players.

However, at the crux of it, everything comes back to Neymar.

You could argue the Philippe Coutinho situation was caused by Neymar as well, with Messi again not taking to Coutinho and the club considering using the former Liverpool midfielder as a makeweight in a swap deal to bring back Neymar, damaging his confidence further. In fact, the refusal to play Ivan Rakitic this season has in part come from the midfielder refusing to be a bit part in a deal to bring Neymar back to the club, again costing Barcelona a key player.

At this point, Barcelona are lucky their La Liga rivals have their own issues, and have dropped plenty of points too – not to mention the fact that it’s early in the Champions League season. If Messi stops making puppy eyes at Neymar and offers to at least go to couple’s counselling with Griezmann until the end of the season, when they can amicably split after increasing their marital assets by a piece of silverware or two, everyone will be happy.

But if Messi keeps Griezmann sleeping on the couch for the next nine months, going solo while waiting for his preferred partner to return, the only outcome will be 98,000 very frustrated fans each week and a flop of a season.