Kevin Sinfield has revealed how Rob Burrow pulled him through his latest endurance challenge and has pleaded with the government to release the £50m it pledged to find a cure for MND.

His three challenges since Burrow’s diagnosis in 2019 have now raised over £7m in honour of rugby league’s legendary number seven, but the wait for the £50m promised by the government for MND research over a year ago goes on.

“It shows the power of sport,” Sinfield told The Sportsman of his own success in raising awareness and funds while the government has so far failed to honour its promise.

“We have been able to show that through sport you are able to take yourself to a dark place in some fairly risk-free environments and that resonates with people.

“This is a community that has been lost and left for so long. A concern is that if that campaigning hadn’t started a couple of years ago then where would we be now?

“That £50 million of funding hasn’t been handed over yet. I do understand there is red tape and bureaucracy that needs to happen.

“But then I look at some of the other ways the government has spent money over the last couple of years and I don’t think it has been scrutinised like this has and at the minute not a penny has crossed over.

“That’s the bit I don’t understand and that disappoints me. There are people dying and families being ravaged and that is not right.

“There is no valid reason why that money is being held back. This is really important.” 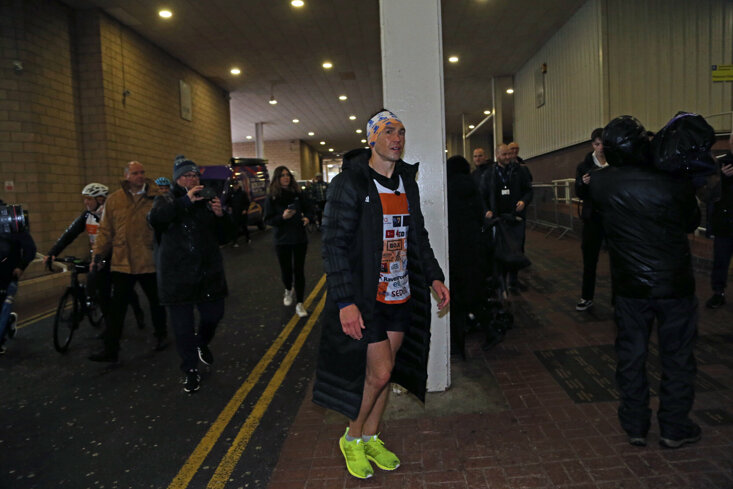 Sinfield Arrives in Newcastle During His Ultra 7 in 7 Challenge

Sinfield shared an emotional moment with Burrow on the Headingley leg of his epic run that took his team from Murrayfield to Old Trafford within a week.

The former Leeds skipper revealed that Burrow was in touch every step of the day, caring as much for the team’s welfare as his own.

“Rob was texting me every night and kept telling me to look after myself,” said Sinfield.

“He genuinely cares about what we are doing and the team, he wanted to make sure we were all healthy and fit.

“That moment at Headingley said it all for me. His eyes and his smile told me everything I needed to know. To greet Lindsey and his mum and dad was an emotional moment that will stick with me forever because I know what it means to them.

“That family, how they have transformed and how they have changed the last couple of years as a very private family who suddenly have opened the front door to the UK to show people what it is like to live with MND. They have done that so courageously.”

Sinfield admits his own life has transformed in the last couple of years since leaving Leeds Rhinos and focusing on his commitment to the MND community alongside his job at Leicester Tigers.

He arguably has a larger place in the limelight now than he did when he was leading the Rhinos to multiple trophy successes, having become universally loved nationwide for his dedication to a cause and to a friend.

“I do understand things have changed for me and less people want to talk rugby with me now which is probably a good thing,” he adds.

“People want to talk about MND and running. The challenge gave me a chance to provide hope to people and there is no greater gift than that. It is so powerful.

“I don’t want any rewards. I’ve had my rewards in the memories I’ve got, the people I’ve met and the difference that hope can make. It’s far bigger than any reward could ever be. The medals and trophies in my career mattered, but they are not the things I treasure. The things I treasure are the friendships and memories. Over the last two years through the three challenges I feel like I’m a billionaire in memories and friendships.”

Sinfield was joined on the final leg of his challenge by football great Paul Scholes, revealing how the Manchester United legend was a neighbour who wanted to help.

“Paul’s a wonderful guy and we live pretty close together so our paths cross.

“On every occasion that I’ve asked him to support something he’s just said yes. I bumped into him coming out of an Italian restaurant a month ago. I told him we’d love to have him on the challenge and he just said ‘tell me where and I’ll be there’. And he was brilliant. A special guy who didn't need to do that but he did.”

Sinfield will run in the inaugural Rob Burrow Leeds marathon next spring but has no plans for any further endurance running challenges, admitting his body needs to heal.

He believes his achievement demonstrates the power of sport, both in influencing politics, and demonstrating what can be accomplished when you have a strong enough reason why.

“Most people can't get their head around doing an ultra-marathon but when you are trying to string seven of them together people want to get behind it.

“In their own minds they probably think they can’t do it. In reality they can. They just need the time to prepare. If you have a ‘why’ or a cause you can do anything you want.

“That shows the power of sport.”