From the first whistle, Jan Vertonghen knew that he was in for a tough afternoon. Tottenham Hotspur’s makeshift left-back was confronted by the explosive Adama Traore, who terrorised him throughout a pulsating 90 minutes at Molineux. At his best, he’s almost unstoppable.

When Traore gets into his stride few defenders can cope with him. Rather than try to match his electrifying pace, opponents often resort to tactical fouls instead. In the space of 14 minutes during the second half, Toby Alderweireld, Eric Dier and Harry Kane were all booked for bringing down the winger as he looked to burst past them. Part of the reason that Vertonghen avoided the same fate was because he couldn’t really get close enough to Traore to begin with.

It’s been a familiar theme throughout this season, with 24 different players shown a yellow card for their clumsy or cynical attempts to deal with the former Barcelona prospect’s unique threat. He’s been fouled on 40 separate occasions in the Premier League, usually as a preventative measure. If Traore gets past a player, they won’t be able to catch him.

It’s difficult to think of anyone else in top-level football remotely like Traore. He’s a bulldozer in boots. He combines the strapping physique of a rugby player with the speed of a sprinter. A relatively short and squat figure, his limbs are almost cartoonishly large and muscular. He doesn’t look or play like anyone else in the Premier League and is all the more exciting for it.

Traore is a direct and relentless dribbler at a time when football has become much more about systems than individuals, about subtly working openings rather than driving at defenders. He's entertaining to watch even if his decision-making has sometimes been awry. Long criticised for lacking end-product and a clear role within the Wolves set-up, he's been much more heavily involved this season and is more consistently affecting matches.

After a difficult spell at Aston Villa, and an unproductive first season at Middlesbrough, both of which ended in relegation, the appointment of Tony Pulis helped Traore to blossom. Considering his reputation as a dour, defensive coach, few expected the Welshman to become so invested in a maverick player who was prone to losses of concentration and focus.

Wolves
@Wolves
"He's been outstanding all season, he's contributing a lot to this team and he's a fantastic footballer, but more importantly, a brilliant person."
🗣 Conor Coady 🤝 Adama Traore 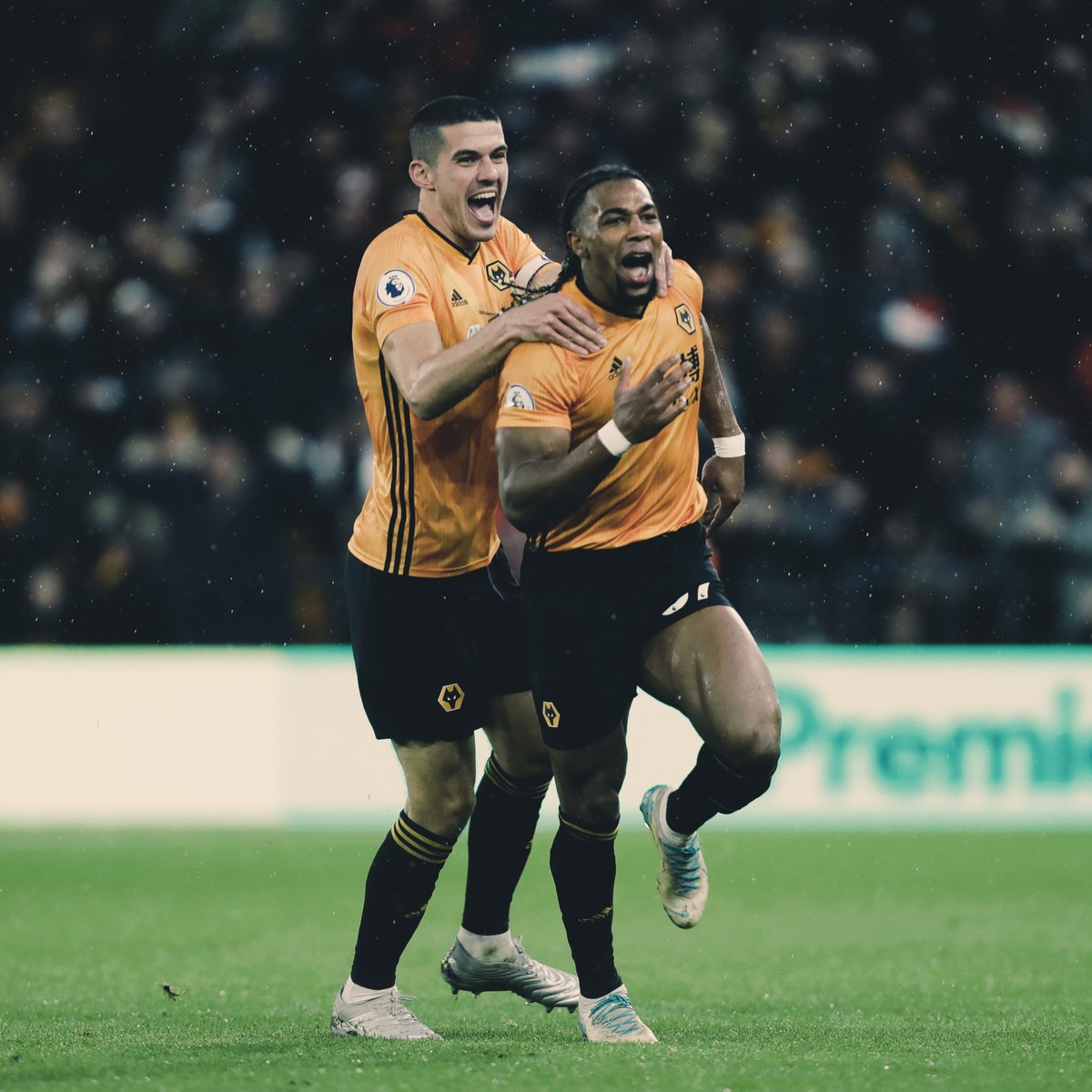 They might have seemed an unlikely match but it worked. Pulis had a telling impact on Traore’s performances. He invested a lot of time in making the wide man better, coaching and cajoling from the sidelines. It enabled Traore to understand his role in greater depth and pushed him to reach the heights he's undoubtedly capable of.

On the substitutes’ bench for Pulis’ first match in charge of Middlesbrough in late December 2017, Traore then started every single game until the end of the season. During that period, he scored five goals and set up a further nine, demonstrating that he could do more than just get supporters up off their seats. He could influence results too.

Traore’s thrilling form under Pulis led to an £18million move back to the Premier League with Wolves. He initially had to bide his time, becoming used to Nuno Espirito Santo's system and what it required of him, but he's been a revelation so far this season. Playing as either a wing-back or part of the front three, Traore has finally established himself in the top-flight.

He’s been a nuisance at home and abroad, as Wolves have recovered from a poor start to reach eighth in the table and also progressed to the Europa League knockout rounds. There have been several eye-catching performances and decisive contributions, including a clinical brace in the win away to Manchester City and Sunday’s thunderbolt from outside the area to top off a scintillating display.

There is still room for improvement, as shown by Traore’s failure to pick up Vertonghen for Tottenham’s winner, but at 23 he’s certainly on the right track. A first call-up to the Spain squad arrived last month before he had to pull out due to injury. For all their emphasis on precise, possession football, Traore’s pace and unpredictability makes him an excellent wildcard option.

In full flight, there are few players as compelling to watch as Traore. He poses a distinctive challenge to defenders, and one that so many are ill-equipped to deal with. In the 2017-18 season, he completed 267 dribbles, the most in the Championship by a huge margin, almost twice as many as his nearest challenger. He continues to be a statistical anomaly in the best possible way.

x
Suggested Searches:
Tyson Fury
Manchester United
Marcus Rashford
Lewis Hamilton
F1
Air Jordan
More
football
European Super League Explained: Here's Everything We Know So...
Competitive football as we know it is being stolen by the so-called ‘biggest’ clubs in Europe [ ... ]
football
Kelechi Iheanacho Fires Leicester Into FA Cup Final For First...
Kelechi Iheanacho continued his stunning form in front of goal to fire Leicester City into the FA Cup [ ... ]
football
Man United Leave It Late To Beat Burnley As Mason Greenwood...
Manchester United last beat Burnley at Old Trafford back in February 2015 heading into this one. And [ ... ]
football
Fulham Suffer Heartbreaking Blow As Arsenal Score 97th Minute...
Fulham were cruelly denied an historic victory and a massive three points as Arsenal scored an equaliser [ ... ]
football
Leicester FA Cup Triumph Can Offset Top Four Worries And Show...
Leicester are flagging badly but this weekend’s FA Cup semi-final against Southampton could be [ ... ]
football
Chelsea End Man City’s Quad Dreams And Reach Fourth FA Cup Final...
Manchester City’s unprecedented quadruple dream came crashing down on Saturday evening after they [ ... ]
football
Norwich City Seal Fourth Premier League Promotion In A Decade
The Canaries don’t even kick a ball until Saturday evening but thanks to Swansea City and Brentford’s [ ... ]
football
Newcastle United Move Nine Points Clear Of The Drop After Win...
Newcastle United took another step towards securing their safety in the Premier League with a 3-2 win [ ... ]
football
Championship Relegation Battle Analysed: Which Team Has The...
Coventry’s 1-0 at Rotherham on Thursday night felt monumental in the Championship and with Norwich [ ... ]
football
Harry Kane Scores Brace But Spurs Top Four Hopes Are Dented...
Harry Kane continued his glorious scoring form against Everton by netting a brace which put him ahead [ ... ]
football
Everton And Tottenham's Faint Top Four Hopes Dangling On Their...
The games have come thick and fast and now we’re entering the business end of the season where [ ... ]
football
Aidy Boothroyd Sacked: Frank Lampard ''Perfect'' For England...
Aidy Boothroyd has been dismissed as England U21 manager after seven years in the England set-up. After [ ... ]
football
Arsenal Cruise Into Europa League Semis With Commanding Win...
Arsenal cruised into the Europa League semi-finals thanks to a phenomenal first-half performance, beating [ ... ]
football
Manchester City's Quadruple Hopes Enter Decisive Eleven Days...
As Phil Foden rattled in the final goal off the Borussia Dortmund post, it was definitive. Manchester [ ... ]
football
Premier League Fixtures: Everything You Need To Know Ahead Of...
The Premier League is here though we have a fractured programme of fixtures owing to the semi-finals [ ... ]
football
Arsenal's Season Rests On The Europa League And Mikel Arteta...
The most important game of Mikel Arteta’s short managerial career? Quite possibly. The biggest [ ... ]
football
Hillsborough, April 15, 1989: Remembering One Of Football's...
On April 15 1989, a warm, sunny, spring afternoon, Sheffield Wednesday’s Hillsborough stadium [ ... ]
football
Quad Dream Remains Alive As Pep And Man City Advance To Champions...
Pep Guardiola reached his first Champions League semi-final with Manchester City after coming from behind [ ... ]
football
Manchester City Ready To End Champions League Quarters Curse...
If Manchester City are to win a historic and unfathomable quadruple this season, they must break their [ ... ]
football
Europa League Quarter-Finals: Everything You Need To Know Ahead...
The Europa League is reaching its final stages as we look forward to the second leg of the quarter-finals, [ ... ]
football
Breathtaking PSG v Bayern Munich Is Why The Champions League...
Utterly breathtaking. If the first leg was an absolute celebration of football the second leg more than [ ... ]
football
Manchester United, City, PSG… Where Could Harry Kane End Up...
Harry Kane has 217 goals in 329 games but still has no silverware to show for his stunning goalscoring [ ... ]
football
Chelsea's Time Is Now, Insists Thomas Tuchel Ahead Of Porto...
Chelsea manager Thomas Tuchel has urged his team not to ‘get lost in dreams, hopes and speeches’ [ ... ]
football
Ten Years Of The Women's Super League Proves Lightning Progress...
On the 13th April, 2011, a new era of women’s football began as the very first game of the Women’s [ ... ]
football
Brighton's Blue Monday Curse Continues But Point Against Everton...
Brighton’s Blue Monday curse continued at home to Everton as their failure to win in the Premier [ ... ]
football
West Brom Keep Slim Survival Hopes Alive With Impressive Win...
West Brom have a mountain to climb but still have a chance of pulling off a great escape to avoid relegation [ ... ]
football
Champions League Quarter-Finals: Everything You Need To Know...
The Champions League quarter-finals promise to be high on entertainment with Bayern Munich and Liverpool [ ... ]
football
Forest Green Rovers Or Chelsea: Where Do Female Managers Fit...
Dale Vince, chairman of Forest Green Rovers is used to doing things differently. Owner of the only vegan [ ... ]
football
La Liga Title Looms For Real Madrid After El Clasico - European...
El Clasico could have proved pivotal in a three horse La Liga title race, Leipzig closed the gap on [ ... ]
football
Alexandre Lacazette And Gabriel Martinelli Score As Arsenal...
Arsenal moved back into the Premier League top ten on Sunday with a 3-0 victory over Sheffield United [ ... ]