Football
News
After a difficult season, Xavi's Barca revival could be just the ticket for Rashford
Joey Mills
16:05, 19 Mar 2022

Manchester United forward Marcus Rashford has been linked with a surprise move to Barcelona. The 24-year-old is out of contract at the end of next season, and has been perturbed by a perceived lack of game time this season. Could a move to the Catalan super-club be just the ticket to revive his flagging fortunes? Or would swapping United for Barcelona simply be a case of trading one fallen giant for another?

If Rashford does leave England for the City of Counts, he will find a far different club than he would have if he’d joined last summer. Ronald Koeman was failing to convince in the managerial hot seat, while the club’s financial issues had seen them part with Lionel Messi. The most steadfast empire in modern football was crumbling.

Rashford knows all about crumbling empires. He spent much of the COVID-19 lockdown trying to fix one; Great Britain. His efforts to try and ensure no child went hungry during the most turbulent time in living memory should never be forgotten, and his endless dedication to charitable and humanitarian causes continues today. The other crumbling empire Rashford is acquainted with is the one that pays his wages; Manchester United.

The England winger watched from the schoolboy ranks as United reached Champions League finals, and lifted the Premier League trophy. You would have forgiven him for picturing himself in the place of the likes of Wayne Rooney or fellow Manchester lad Danny Welbeck one day, lifting major honours at Old Trafford. It hasn’t quite worked out that way.

While his troubles this season mean naturally he is judged in the harsh light of recent failings, Rashford has enjoyed a decent United career. He’s played 297 games for the club, scoring 93 goals and landing three major trophies along the way. The issue is that the last of those trophies came five years ago, and his five goals so far this campaign will leave him well short of breaking the 20 goal barrier he has in the last two seasons. The player, like his club, seems to be regressing.

The cracks are beginning to show. Rashford was harangued by fans outside Old Trafford after the Red Devils were eliminated by Atletico Madrid in the Champions League round of 16 this week. A video emerged appearing to show Rashford reacting to abuse with a hand gesture. Verbally harass someone from most walks of life outside their place of work and you’d probably get the same back, but football is often a warped kaleidoscope of the real world. Rightly or wrongly, Rashford’s reaction will be held against him. 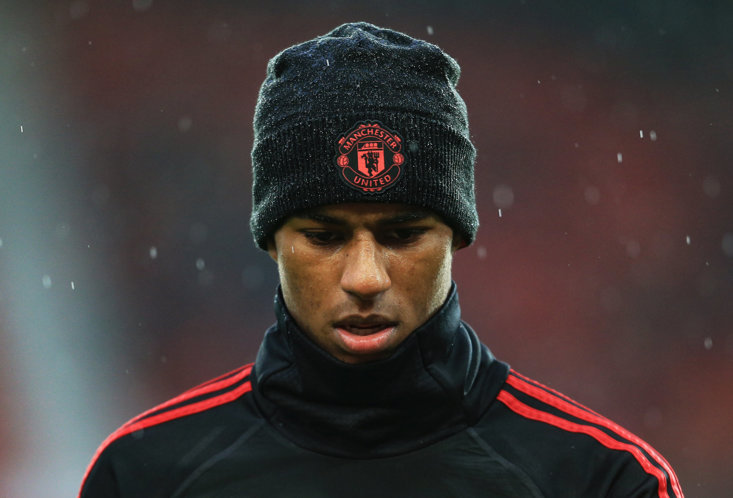 Would a new life at the Nou Camp be the fresh start Rashford needs? There are certainly plus sides. One appears to be the rejuvenative powers of manager Xavi. The legendary former midfielder has taken a mis-matched group of youngsters, holdovers from as far back as the Pep Guardiola era and players you sense would never get near Barcelona in their pomp and made a cohesive unit from them.

January signing Pierre-Emerick Aubameyang can offer a player like Rashford hope of what’s possible. Persona non grata by the time of his Arsenal exit, the Gabon international had seen his on-pitch output decline in the same way as the United man. Aubameyang scored just four goals in 14 league games for the Gunners in the first half of this season. He has five in his first six La Liga outings. He is also not the only ex-Premier League star to find working under Xavi restorative.

In a situation that mirrors that of Rashford, Ferran Torres is a player just approaching his prime who was reassured by Manchester City that he was an important part of their plans. The Spain international went to Barcelona in search of game time at a big club and has never looked back. Xavi has shown faith in the 22-year-old and he has repaid it five goals in his 13 appearances for the Blaugrana.

Moving away from the harsh glare of the British press would be another plus point for Rashford. With United faltering, Rashford and his teammates are never far from the latest cracked-badge tabloid inquest. The press can be equally demanding of La Liga players, but you would expect Marcus to be afforded a grace period. There would also perhaps be less schadenfreude from journalists writing for newspapers who back the very government Rashford so effortlessly showed up in 2020.

There is merit in Rashford staying put though. The club is set to exit their Ralf Rangnick-led holding pattern this summer and appoint a new manager. Whoever comes in is likely to want hometown hero Rashford, an influential dressing room figure, onside. They will also be conscious of what he is capable of at his best. Players endure bad seasons, but it is too soon to torpedo what has largely been a good United career in individual terms. Rashford will likely want assurances over playing time, and may leverage Barca’s interest to get them. But while much of the United squad is either about to leave or looks like they should, Rashford still gives the impression of someone who can contribute.

This is a decision not to be taken lightly. Manchester United has been Rashford’s only home as a professional footballer. As a Wythenshawe boy, so much of his identity is intertwined with Old Trafford. On the other hand, Xavi seems to have styled himself as a footballing Lazarus Pit, reviving the fortunes of football’s misfits. At 24 years old, Rashford is just starting his prime years. Now he must decide where those years will take place.