Twenty-five years ago today, Alan Shearer joined Blackburn Rovers from Southampton in a move that helped mould him into the best English striker of his generation.

Already capped by England, Shearer completed a then record £3.6million move to Ewood Park with David Speedie reluctantly going in the other direction.

At the time, Shearer was 21 and the leading English striker of his generation despite a modest return of just 23 goals in 118 league appearances for Southampton.

He was seen as the natural successor to Gary Lineker after his record-breaking goalscoring feats in an England Under-21 shirt and so it proved.

Shearer, of course, famously turned down Manchester United in favour of Blackburn, perhaps sensing the revolution that Kenny Dalglish, backed by Jack Walker’s millions, was conjuring at Ewood Park.

Shearer scored twice on his Rovers debut on the opening weekend of the 1992-93 Premier League season in a 3-3 draw with Crystal Palace and never looked back.

He scored twice from distance at Selhurst Park and, speaking after that match, Shearer said: "I knew the eyes were on me and it was a big pressurised situation because I was expected to deliver."

A further 20 goals in all competitions followed, before his first season at Ewood Park was ended by a cruciate ligament injury suffered in December 1992. 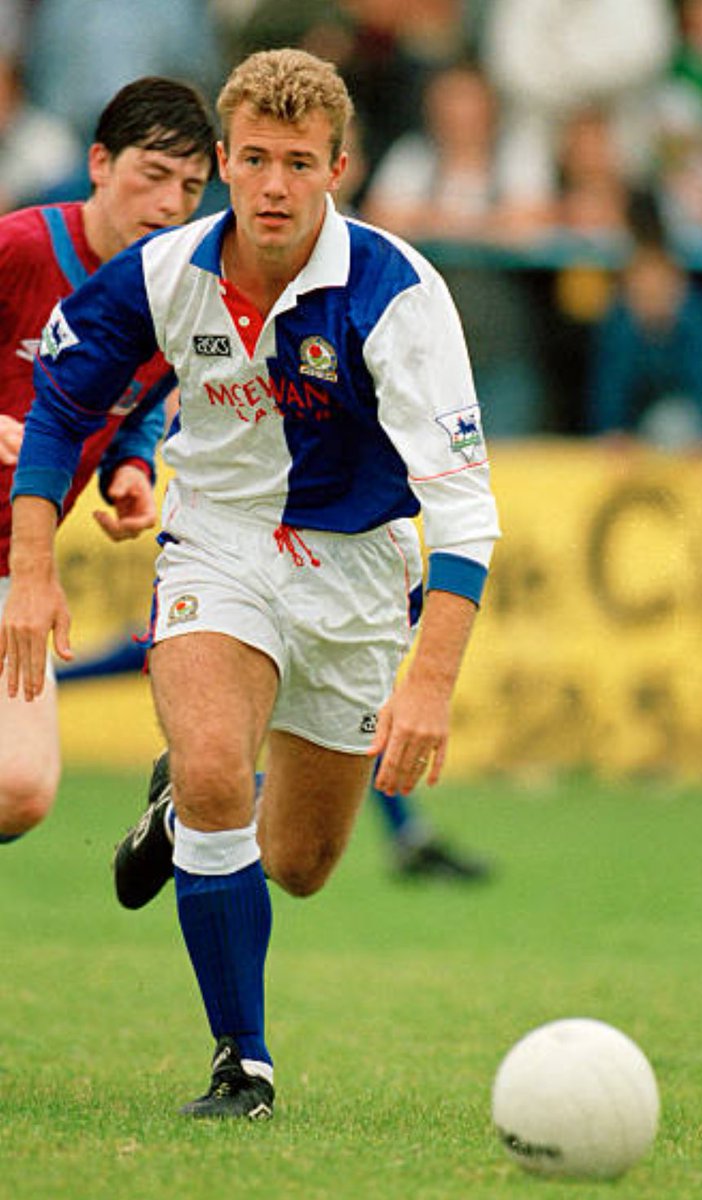 Yet, while that is a complaint that has hampered many careers over the years, Shearer returned for the following campaign in even better form.

In each of the three seasons that followed, his goal return read: 34, 37 and 37. The first of that 37-goal haul came during the 1994-95 campaign when, with Chris Sutton contributing 15 alongside him, Shearer helped fire Rovers to a first league title since 1914.

Unsurprisingly, those exploits saw Shearer voted the PFA Player's Player of the Year by his fellow professionals. Shearer’s partnership with Sutton saw the strike duo nicknamed the SAS and they were ably assisted by Jason Wilcox and Stuart Ripley on the flanks.

In all, Shearer made more than 150 appearances for Blackburn, scoring 131 goals and inspired the club to the Premier League title in 1995. He departed Ewood Park for hometown club Newcastle United in the summer of 1996 for £15million, despite strong interest from champions Manchester United.

Once again Shearer's serviced commanded a record fee - on this occasion £15million.

Reflecting more recently on his time at Blackburn, Shearer said: “It's an incredible story where Blackburn came from.

“To come from the old Second Division into the Premier League and take on the big boys - Man United, Chelsea, Liverpool and Arsenal - and beat them as we did.

Shearer scored 283 league goals in his career, including a record 260 in the Premier League (of which 58 were penalties) with a record 11 Premier League hat-tricks, and a total of 422 in all competitions including international at all levels.

x
Suggested Searches:
The Sportsman
Manchester United
Liverpool
Manchester City
Premier League
More
football
England 3-3 Germany: Southgate's Subs Lift The Mood As Goalscoring...
When Gareth Southgate’s England side were battered and bruised against the ropes, their nose bloodied [ ... ]
football
Why Do We Love Our Football Club - Part One: The Fans
In this five-part series, The Sportsman will be exploring one of football's biggest questions. Just [ ... ]
football
Long Live The Meaningless Friendly: Why The Nations League Has...
The dust has settled on England and Wales’ relegation from Nations League Group A. The ramifications [ ... ]
football
The Search For Harry Maguire: England’s Most Confounding Footballer
Harry Maguire is English football’s greatest enigma. Everyone has an opinion on what he is and [ ... ]
football
Watford Sack Manager Rob Edwards With Slaven Bilic Announced...
Rob Edwards has been relieved of his duties as Watford boss just 10 games into the Championship season. [ ... ]
football
Eric Cantona Offered To Become Manchester United's First President...
Legendary former Manchester United star Eric Cantona has revealed that he offered his services to take [ ... ]
football
Why Trent Alexander-Arnold Shouldn't Be In England's World Cup...
It’s the experiment that causes more debate than any other. But after being omitted from the England [ ... ]
football
LIVE Football Blog: England Host Germany In Final Game Before...
England return to Wembley tonight to compete in the Three Lions' final game of their Nations [ ... ]
football
Southgate Should Let Attackers Play With Freedom Against Germany
The mood surrounding the England national team isn’t great. We are less than two months away from [ ... ]
football
Missed Chances And Lewandowski Magic Relegates Wales
Wales have been relegated to League B of the UEFA Nations League after suffering a 1-0 defeat against [ ... ]
football
Chelsea Overcome Poor First Half Against Manchester City For...
Reigning Women’s Super League champions Chelsea are up and running this season as they defeated [ ... ]
football
Live Football Blog: Women's Super League + Wales Take On Poland
Good afternoon football fans! We've got Women's Super League action on the menu today as West [ ... ]
football
Grading Every Premier League Club So Far: A's For Arsenal, Fulham...
The international break is here and so what better time for Premier League clubs to take stock of their [ ... ]
football
LIVE Football Blog: All The Latest News From The World Of Football
Today we get our afternoon started with the Women's North London Derby between Arsenal and Tottenham, [ ... ]
football
What The 'Big Six' Premier League Managers Need From This International...
International breaks are strange times when you’re a club manager. At the top end of the Premier [ ... ]
football
Granit Xhaka: Arsenal Midfielder's Renaissance Is No Surprise
Arsenal have been a joy to watch. When was the last time we said that? Mikel Arteta’s side [ ... ]
football
Italy 1-0 England: Three Lions Relegated From Nations League...
England fell to another painful defeat to Italy which this time saw them relegated from League A of [ ... ]
football
Women's Super League Week 2: Arsenal Hammer Spurs In North London...
Arsenal 4-0 Tottenham Hotspur  The North London Derby at the Emirates Stadium didn't disappoint, [ ... ]
football
Brendan Rodgers Has Punched Above His Weight At Both Liverpool...
Brendan Rodgers is sleeping with a suitcase under his bed right now. It feels like this is the end game [ ... ]
football
Bukayo Saka Named England Player Of The Year For 2021-22
Bukayo Saka has been named as England’s Player of the Year for the 2021-22 season. The winger [ ... ]
football
England News: Pope, Henderson And Ramsdale Jockey For Pickford's...
England head into their upcoming international fixtures without Jordan Pickford. The Everton shot-stopper [ ... ]
football
Mourinho And Stormzy: Other Football Stars To Appear In Music...
Jose Mourinho: Managerial maestro. The man who became the first football coach to win the [ ... ]
football
Cost Of Living Crisis: Mansfield Town Become First Club To Move...
Mansfield Town have announced that their forthcoming home match against Walsall has been brought forward [ ... ]
football
Paul Merson Reveals That Matt Le Tissier Was Warned Before Sky...
Paul Merson has revealed that his friend and former Sky Sports colleague Matt Le Tissier was given several [ ... ]
football
Italy vs. England: How The Three Lions Should Look Based On...
Today’s the day. England take on Italy in Milan in what is a crunch clash between the Euro 2020 [ ... ]
football
LIVE Football News: England Take On Italy In Crucial UEFA Nations...
Welcome to The Sportsman's LIVE football blog, where we will be bringing you all the biggest and [ ... ]
football
Italy Vs England: Tomori And Abraham's Serie A Experience Is...
As England prepare to face Italy in their Nations League clash on Friday, Gareth Southgate’s side [ ... ]
football
Belgium Vs Wales: Kevin De Bruyne Demonstrates His Genius
Belgium’s 2-1 victory over Wales was the case of one talisman triumphing over another. Kevin De [ ... ]
football
Who Are The Fastest, Strongest & Most Aggressive Premier League...
We are now just eight days away from the full launch of EA Sports’ final FIFA title, FIFA 23, [ ... ]
football
The Best XI Across Europe's Top Five Leagues So Far In 2022-23
The final international break ahead of the Qatar World Cup is underway and while fans are thinking at [ ... ]