“I wish there was a way to know you're in the good old days before you've actually left them.”

Nineteen years ago today, Roy Jones Jr enjoyed the pinnacle of his good old days. A year later, those days were well and truly behind him. The iconic ‘Captain Hook’ captured the WBA heavyweight championship on 1st March 2003, becoming the first former middleweight champion in over 100 years to do so. Jones’ unanimous decision win over John Ruiz could have been a spectacular climax to one of the great ring careers. Instead, it was a final flash of brilliance, a final crescendo before the sharp decline that would colour another 15 years in the ring.

Roy had flirted with the idea of moving up to heavyweight before. In 1998, the Pensacola, Florida man was scheduled to face former heavyweight champion James ‘Buster’ Douglas. The first man to beat Mike Tyson in a professional ring had gone 6-0 on the comeback trail, and a blockbuster clash with then-light heavyweight champion Roy Jones Jr was in the calendar. Ultimately it was the fighter’s father, Roy Jones Sr, who advised his son the bout was too much of a risk at this stage of his career.

So Roy stayed at light heavyweight, rattling off another eleven defences of his unified title over a five-year period. Finally, in 2003, the pound-for-pound king decided to try and make history. Jones Jr had held the middleweight, super middleweight and light heavyweight titles in his career, and now he was targeting the heavyweight crown.

It must be said that Jones did not challenge for the heavyweight championship. In March 2003, Lennox Lewis was still considered the lineal heavyweight champion, as well as retaining his WBC recognition. But Ruiz was still considered to be a bridge too far for the ex-middleweight in many quarters. The WBA champion fought a physical, mauling style that demanded strength and stamina from his opponents. ‘The Quiet Man’ was rarely entertaining to watch, but always hard to beat. Ruiz had emerged from a trilogy with Evander Holyfield as the champion, and was an opponent to be respected.

The fight was a matter of legacy for Jones. Bob Fitzsimmons’ 1897 heavyweight title win was the last, and only, time a former middleweight king had moved up to the banner division and reigned. ‘Superman’ also stood to become the first man to hold the middleweight, super middleweight, light heavyweight and heavyweight titles. After an almost-unblemished career, in which he had suffered just one disqualification defeat, Jones could cap off a remarkable legacy.

Jones needn’t have worried about Ruiz’s strength and physicality. The heavily-muscled challenger did not let his opponent get close enough to use his power advantage, picking him off with sharp and speedy shots from range. Swift, ripping uppercuts busted the champion’s nose in the fourth, as Jones proved a great little man can beat a good big man.

At a career-high 193lb, Jones appeared to have lost none of his speed. ‘Captain Hook’ took the unanimous decision by wide scores to become the heavyweight champion. In amongst the joy, the celebration and the coronation; there was a ghost at the feast. Lurking somewhere in the corner, behind the well-wishers, hangers-on and bandwagon jumpers. Right at the back of the Thomas & Mack Center in Las Vegas, the shadowy figure of reality stood waiting for Jones. The reality that things would never be this good again.

For a while, it looked like the new WBA heavyweight champion had the world at his feet. Fights were mooted with some of the division’s greatest names. Jones could not seem to get any of them as far as the ring though. Lewis dismissed the idea, while an Evander Holyfield scrap never materialised. A bout with Mike Tyson was the closest, and also the most intriguing. This was the Tyson that would soon lose to Danny Williams, while Jones was in his physical prime. If the champion could have retained his title against ‘Iron’ Mike, it would have elevated his already lofty legacy even further. The pair would eventually meet in an exhibition bout in 2020. 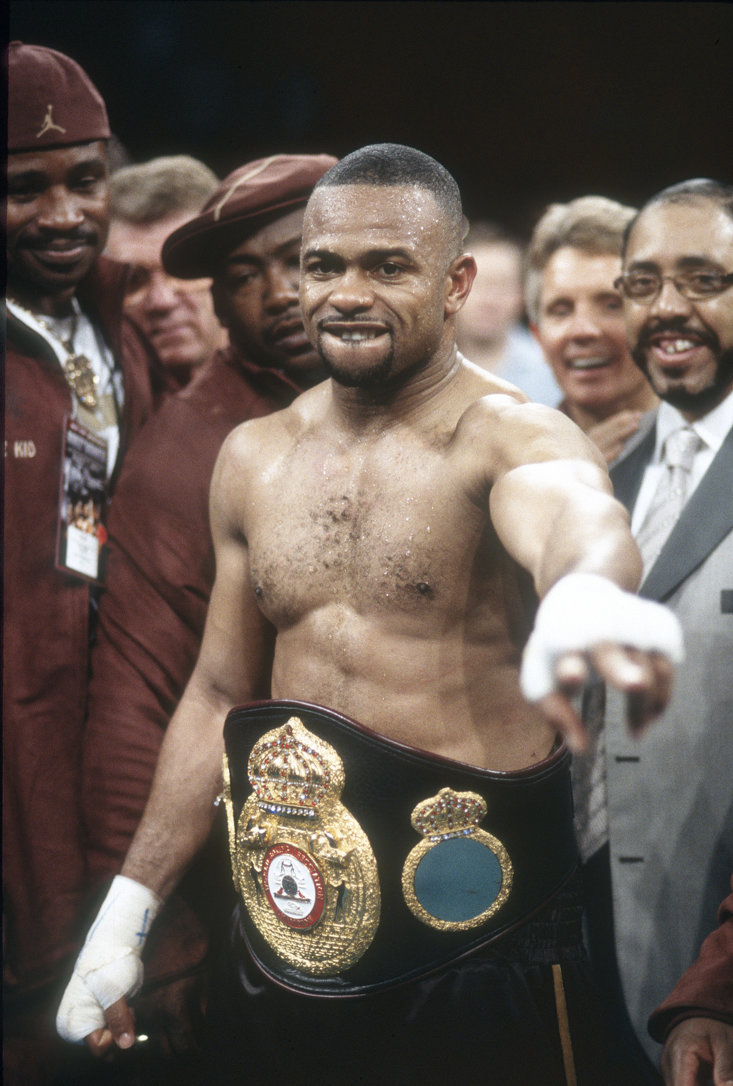 With the heavyweight logjam refusing to clear, Jones took the regressive step of returning to reclaim his old light heavyweight titles. The move would prove costly. Roy looked like a shadow of his former self in beating new champion Antonio Tarver via disputed decision. The unconvincing nature of the win led to a rematch. Disastrously, Jones was destroyed in two rounds. One of the greatest primes in the history of modern boxing was over, just two fights after Roy Jones Jr had become heavyweight champion of the world.

Hindsight is famously 20-20, but it is hard to shake the feeling the Ruiz fight would have been the ideal end to the Roy Jones Jr story. If Jones retires then, as reigning champion and with just one disputed DQ defeat on his record, he does so as one of the greatest fighters that ever lived. His place in history remains secure, but it would become tarnished as the years wore on.

Jones was 34 years old when he engineered his career masterpiece against Ruiz. Inconceivably, he would fight on for another 15 years as a professional. During those years he went 17-8 and suffered five knockouts. Jones never again won a recognised world championship. Jones’ generational tenure at the top of his sport is not overshadowed by his decline, but it is harmed by it.

The man you saw in the ring after that night was not Roy Jones Jr. The physical toll of losing eighteen pounds of muscle and trying to compete again as a light heavyweight was the death knell for the great man’s world class ambitions. But try not to judge the fighter Roy became. Instead, on the anniversary of his greatest moment, remember the fighter he was.