From the minute Keiron Cunningham made his St Helens debut at the age of 17, it was clear he was a superstar in the making. Adding a new dimension to the Saints’ game with his electric dummy-half play, the young hooker became a key part of the team which would go on to end the legendary Wigan era of seven straight league titles and eight consecutive Challenge Cups when doing the double in 1996.

But Cunningham, who celebrates his 45th birthday on Thursday, was never going to stop there. Along with Sean Long, Tommy Martyn, Paul Sculthorpe and Paul Wellens he would be the driving force of one of the greatest spines British rugby league has ever seen as Saints went on to win further Super League titles in 1999, 2000 and 2002 plus 1997 and 2001 Challenge Cups. He would always get Saints on the front foot, having the intelligence to seek out and exploit even half-an-inch of space in opposition defences.

While that team evolved over time, Cunningham stayed the course, leading his hometown club to further successes in completing a brilliant treble in 2006 and then captaining them to Challenge Cup wins in 2007 and 2008.

All of this had come despite a very close shave with a move to Cardiff rugby union club in 2001. With big money being waved in front of him and the lure of playing in the homeland of his Welsh grandfather, Cunningham took a long time to come to a decision, and invariably looked to be on the verge of leaving rugby league. So vital a figure was he considered to be by the sport that the RFL set up a fundraising organisation to help to keep him from the grasps of union. 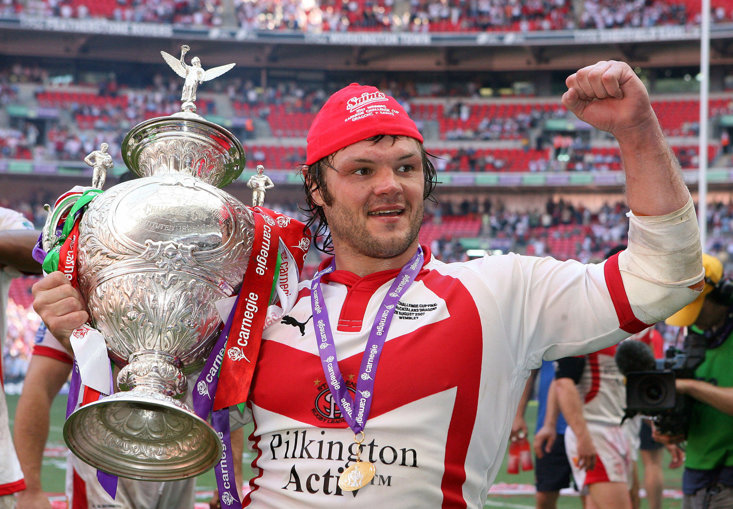 In 2010, having previously gone back on earlier retirement announcements, Cunningham pledged that he was finally ready to wave goodbye. In his final regular season appearance, Keiron was given a hero’s farewell even before he had made one of his lasting contributions.

Saints needed to beat Castleford Tigers by nine or more to finish in second place and earn a home tie in the play-offs and led 34-30 with 20 seconds to go. As it stood, Saints were playing potentially their final game at Knowsley Road, and Cunningham was seconds away from a tearful goodbye.

But from a play-the-ball 10 yards out with the clock running down, Cunningham went for a trademark scoot. He made it over the line but appeared to have been held up until he somehow summoned up a second effort which saw him crash down for the try which earned his side a 40-30 win and the coveted home draw against Warrington Wolves.

As if that wasn’t enough, three weeks later he would have the final say in the last game ever to be played at Knowsley Road. With six minutes remaining against Huddersfield Giants in the Super League semi-final, Cunningham again made a charge from acting half and shook off the covering defence to score. The legendary local lad had scored the final try at the club’s 120-year-old home in his last home game as a player. Twice.

When Saints moved into their new Langtree Park home in 2012 after a year playing home games in Widnes, it came as little surprise to anyone that the man whose figure had been replicated in a bronze statue outside the main entrance was Keiron Cunningham. A club which had become synonymous with names such as Vince Karalius, Tom van Vollenhoven, Alex Murphy and Paul Sculthorpe had chosen Cunningham over the lot of them as their lasting emblem.

Even an unsuccessful spell as Saints head coach couldn’t sully Cunningham’s reputation in St Helens. His 496 appearances and 175 tries had seen to that.

Whether it’s his dramatic try against Castleford, the repeat dose v Huddersfield, him lifting the Challenge Cup at Wembley or any number of brilliant scoots from dummy half, every single Saints fan will be able to recount a great Keiron Cunningham moment without even having to think.

What he did for St Helens, few others could claim to have even come close to replicating.