Football
News
The Turkish international appears to be a shadow of the player he used to be
Conor Keane
08:04, 19 Sep 2021

Once upon a time, Leicester City defender Caglar Soyuncu was one of the most talented and promising centre-backs in the Premier League. He was the shield that Kasper Schmeichel looked to after Harry Maguire bade farewell and it seemed that the Foxes’ defence had the experience and resilience to push forward. Now, the Turkish international appears to be a shadow of the player he used to be and it is really worrying for Brendan Rodgers’ side.

It is unknown if the player is suffering a really bad hangover from his national team’s dismal performance at Euro 2020, but it’s as if his international self has returned to England and he has already made some poor judgements and errors this season, which highlights the club’s desperation for Wesley Fofana to return to the side as quickly as possible.

Soyuncu turned in his worst performance of the season in the 4-1 loss against West Ham United, in which Michail Antonio, with his back to goal, was able to easily brush off the centre-half and fire his shot from close range past a helpless Schmeichel. He was then responsible for gifting Norwich City a penalty with his ill-timed challenge on Pierre Lees-Melou. There have been too many errors from such an experienced defender in a season that is still in its infancy. 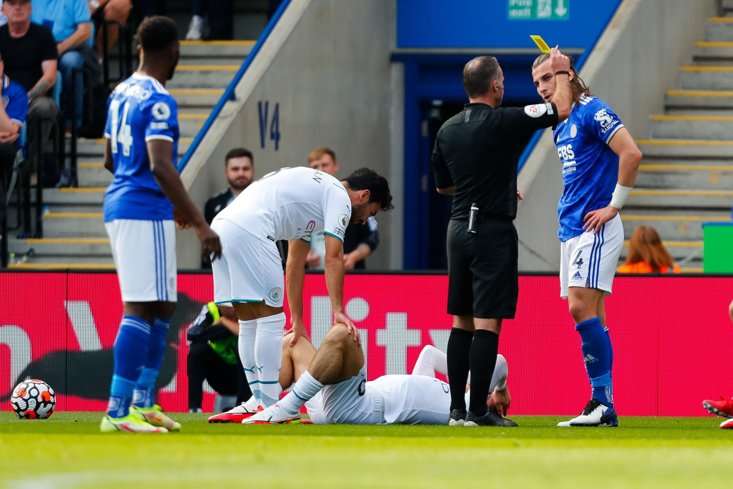 The unfortunate injury to Fofana in pre-season, along with the early absence of Jonny Evans, left Soyuncu as Leicester’s leader in defence and he has not been able to handle his added responsibilities. After his shaky start to the season, Rodgers called on him to step up and lead, but that rallying cry hasn’t appeared to help the 25-year-old.

He came on as a substitute in Thursday’s Europa League match against Napoli at the King Power Stadium, where the hosts threw away a two-goal lead. Soyuncu was easily beaten in the air, lacking the desire and strength to head the ball clear as Victor Osimhen towered to head in the equaliser, denying the Foxes an excellent three points to get their European campaign off to a flying start.

Speaking about the defender’s sloppy start to the season, Rodgers told the Leicester Mercury: “When I came in here, he was fourth-choice centre-half and he’s developed over the past couple of years. In the main he’s played consistently very well and now it’s maybe time to strip the game back and go back to basics.

“He’s got the tools to be a really top-class centre-half. He’s shown that many times here. He’s got great pace, he’s strong in the air, quick in the recovery and his anticipation when he’s concentrated is very good. But he also knows as a defender you can’t make mistakes, and especially at the level we’re performing at you can’t constantly make them.”

It is admirable of the Northern Irishman to back the player during this rough patch. Injuries, of course, may be forcing him to praise his defender, but if he continues to make mistakes, Rodgers will have no hesitation in pulling Soyuncu out of the starting lineup.

With Daniel Amartey waiting in the wings, having already impressed in the heart of defence this season, the Turkish star could soon find himself out of sight and out of mind in Rodgers’ side if his performances fail to improve.

The Foxes travel to the Amex this weekend to take on Brighton & Hove Albion. The home side are 17/10 to triumph with Betfred, while Leicester are 15/8. The draw can be back at 9/4.