How would you feel, if you were Bruno Fernandes? You score at the World Cup and your illustrious teammate, Cristiano Ronaldo, tries to claim it for himself? A bit of dressing room joshing over a disputed goal is not uncommon, it happens in local park changing rooms every Sunday. But this is football’s biggest stage and this went further than the dressing room.

No less an authority than the Portuguese Football Federation have taken the matter further, trying to essentially have a goal taken off one of their own players and given to another. They want the goal given to Ronaldo, so it can be sequestered away with the other 118 he has bagged for his country.

The fact Ronaldo is greedy for goals is well-known. You don’t score more than any player in history, 819 and counting, without taking a bit of a “me first” attitude. It is this very individualistic streak that has made him one of history’s greatest players. But his unending efforts to try and claim a goal that the wider footballing world agrees belongs to someone else begs the question. Is playing with Ronaldo good for his teammates?

His Manchester United teammates no longer have to worry about it. Ronaldo came to terms on a mutual termination of his Red Devils contract during this World Cup, meaning his next club football will come in new surroundings. But his Portugal teammates remain in thrall to his waning powers and growing ego.

One man straddles both of these groups: Bruno Fernandes. The midfielder from whom Ronaldo was hoping to steal the opening goal against Uruguay. For his part, the United man has claimed to be nonplussed by the debate, equally happy with the goal being Cristiano’s as his own. But then toeing the party line and saying all the right things is crucial where Ronaldo is concerned. Step out of line and another tongue lashing is possible. Ronaldo does have Piers Morgan on speed-dial after all.

Ronaldo is not Fernandes’ problem at club level any more. While the midfielder has always been keen to talk down ructions between the pair, there has been a decline in his performances since “CR7” made his second debut in 2021. While there was a general decline in United’s play last term, the effect on Fernandes was the most stark. 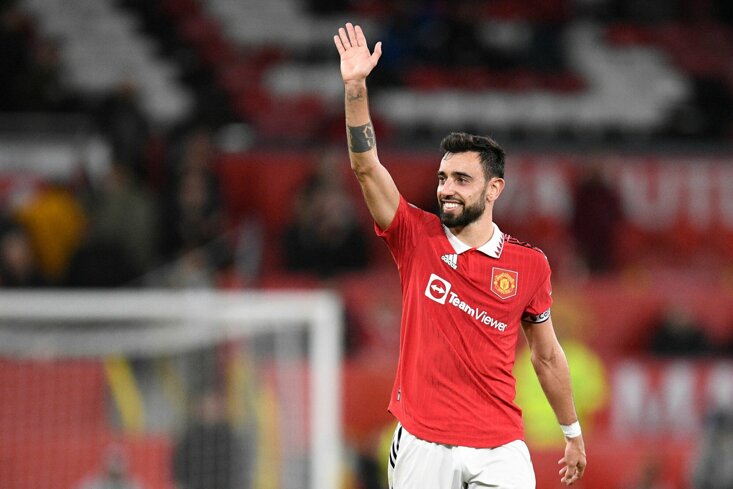 In the 2020-21 Premier League season, Fernandes netted 18 goals and logged 11 assists in 37 games. In 36 games last season, his totals fell to 10 goals and six assists. In his previous season-and-a-half, Fernandes had been United’s north star. The main fulcrum around which the rest of the team oscillated. With Ronaldo’s stature and status, Fernandes ceded that role to him last season. The effect on his own game, and that of the wider team, was stark. Ronaldo played well, bagging 18 league goals. But his teammates underperformed.

Bruno has shown significant improvement this season, largely in Ronaldo’s absence. His finest work has come as United’s creative talisman. Some players need to be indulged and both Fernandes and Ronaldo are those sorts of players. Manager Erik ten Hag being free to indulge the peaking 28-year-old over the fading 37-year-old could prove a turning point for the club.

The state of play for the national side is clear-cut. In his blockbuster interview with Morgan, Ronaldo outlined his desire to keep playing until he is 40. That’s a shade over two years away. If the rumours of a move to Al-Nassr FC are to be believed, the ex-Real Madrid man will not be playing the most taxing form of club football going forward. Not many players plying their trade in the Saudi Pro League play for countries as strong as Portugal. But this is Cristiano Ronaldo, a player beyond convention. Given the Portuguese Federation’s desperate attempts to placate him and see him awarded the Fernandes goal, perhaps playing a lower standard of football will prove no barrier.

All evidence suggests that Fernandes is better off without Ronaldo on his side. Two apex footballing predators rarely mix well. If Bruno had any doubt over whether he could co-exist with his counterpart, ‘Goalgate’ should have answered that once and for all. Ronaldo doesn’t care about what happens to Fernandes. Now Fernandes can play, for his club at least, without worrying about what happens to Ronaldo.