Liverpool have gone to the top of the Premier League after champions Manchester City had to make do with a point at the Etihad Stadium on Saturday. Southampton’s stubborn resistance was too much for Pep Guardiola’s men, although City could have endured an even worse afternoon after Kyle Walker was sent off and a penalty was awarded for a foul on Adam Armstrong. A lengthy VAR check saw the decision reversed, and the home side emerged with a point.

The usually free-scoring Cityzens could only muster a single shot on target as Ralph Hassenhuttl’s men defended brilliantly. Even the second-half introduction of Kevin de Bruyne and Riyad Mahrez could break the deadlock. Raheem Sterling scored what appeared to be a late winner, but saw his effort chalked off for offside.

Liverpool continued to assert themselves as title challengers with a comfortable 3-0 win over Crystal Palace. Sadio Mane opened the scoring with his 100th Liverpool goal, his ninth against The Eagles. Vicente Guaita did well to stop a Mohamed Salah shot, but the Senegalese forward was on hand to poke home the rebound.

Salah bagged his 101st Premier League goal to double Liverpool’s lead with a near post strike. Naby Keita put a ribbon on the result with a minute to play, timing a wonderful volley to get the Anfield crowd on their feet. This win means Liverpool remain unbeaten in the last 93 Premier League games in which they have led at half-time. 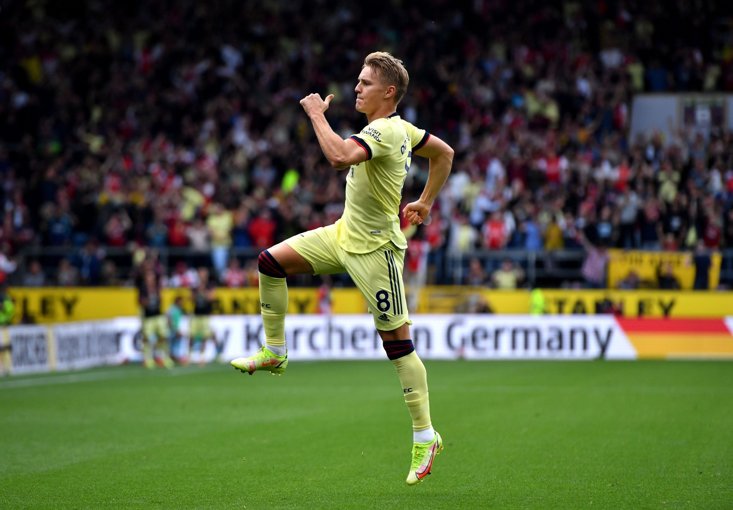 ODEGAARD CELEBRATES HIS WINNER FOR ARSENAL

Arsenal continue their long road back from a dreadful start to the season with a second win in a row, this time beating Burnley 1-0. Odegaard scored the winner with a majestic free-kick half an hour in, his first since joining the club permanently in the summer.

This result piles more pressure onto Burnley, as they remain without a win in 19th place. It appears manager Sean Dyche will be given time to correct this though, as he signed a contract extension until 2025 this week. The former Watford coach will feel aggrieved that a penalty awarded for his side after Aaron Ramsdale brought down Chris Wood was overturned by VAR.

Watford triumphed in the battle of the newly promoted sides, beating Norwich City 3-1 at Carrow Road. Emmanuel Dennis opened the scoring for the visitors, overcoming Ozan Kabak to head in a superb Kiko Femenia cross. Teemu Pukki equalised to send the sides in level at the break.

Xisco’s men had the better of the second half, but the game was competitive all the way. Ismaila Sarr proved to be the difference, his brace showing why is a constant transfer target for top six sides.

The early kick-off saw Wolverhampton Wanderers extend their poor start to the season, as Brentford clinched their first Premier League away win. Bruno Lage’s men are yet to score at home this season, and failed to register a shot on target against the Bees. Ivan Toney opened the scoring with a penalty, before assisting Bryan Mbeumo to make it 2-0. Shandon Baptiste was sent off just after the hour, receiving a second yellow card for a foul on Trincao, but not even that could derail a great afternoon for Brentford.