Group A at Euro 2022 features a heavy favourite on home soil, but Group B is a smorgasbord of eclectic talent, which is more difficult to predict. Dubbed, the group of death, with Spain, Germany, Denmark and Finland all ready to do battle on these shores, we assess the star names to watch out for in Group B.

It’s difficult to know where to start with this immensely talented Spain squad. The bookies favourites to go all the way have a remarkable collection of talent from their homeland, with only Manchester United’s Ona Battle playing her domestic football outside of Spain. This means that Jorge Vilda has ten players from Barcelona to choose from, and La Blaugrana are, for many, the best team in the world.

That seems a slightly left-field statement to make given they were so comprehensively beaten by Lyon in the Champions League final, but their journey to that point, which saw record crowds at the Nou Camp and an unbeaten league season, was scarcely believable. In La Liga they won 30 from 30, scored 159 and conceded just 11.

So the individual talent they possess, headed by Ballon d’Or holder Alexia Putellas is frightening. Forward Esther Gonzalez is a hot property that could well win the Golden Boot at 8/1. Spain tend to spread their goalscoring around the team, but the Real Madrid star has 15 in 23 for her national team. Their fluid passing style, reminiscent of the men’s team that dominated world football could lead to success in this tournament, but it is the age of this squad that could worry the footballing world. They’ve got a chunk of core players in their prime, who are guiding the stars of the future.

Teresa Abelleira, Misa Rodriguez and Olga Carmona are 22, Laia Aleixandri and Athenea Del Castillo are just 21 and Claudia Pina is 20. This is a stacked Spain squad that can tear up the Euros and future tournaments to come.

Germany are the big name nation tasked with stopping them in the group. Before the Netherlands success in 2017, they had won this tournament a frankly outrageous six times in a row but their greats of the past have now made way for new youngsters - while other nations have made huge progress to catch them up. They beat Spain in the group stage of the 2019 World Cup as they topped the group, and are clearly a dangerous outfit with several gems. 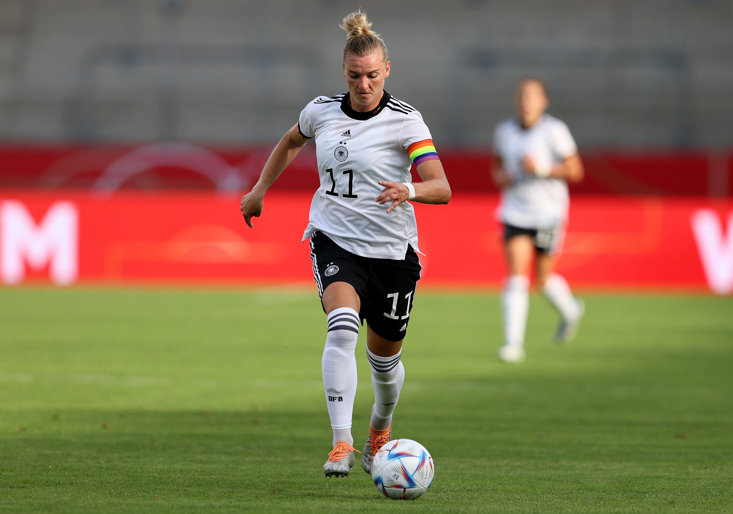 Popp will be key for Germany

Their goalkeeping talent is immense, proven by the fact that Chelsea’s Ann-Katrin Berger - for many the best in the world - can’t get a look in ahead of Merle Frooms. Lena Oberdorf at just 20 is hugely exciting in midfield, while the Bayern Munich representation including Lea Schuller, Sydney Lohmann and Linda Dallmann will all compete for places. But there is only one star name for Germany: captain Alexandra Popp. The Wolfsburg star has scored 53 in 114 international games and is the beating heart of this German side. They are a more than capable outfit but they will live and die on her individual ability to take key chances.

2017 losing finalist Denmark are back for another bite of the cherry in a group that sees three giants collide. Their run to the final last time out was somewhat of a surprise but they only lost 1-0 in the group to eventual winners and home side the Netherlands, before coming unstuck 4-2 in the final. They beat Spain and Austria on penalties, and if they can get out of the group they will be hugely dangerous if things go all the way.

But this squad is one to be wary of. Captain Pernille Harder, of Chelsea fame is the country’s top scorer with 68 goals, and she showed her immense ability in Emma Hayes’ title-winning side last term. Reading’s Sanne Troelsgaard is also a huge goalscoring threat from midfield and offers good experience while Manchester United’s Signe Bruun has scored a hot 15 in 23 for her nation.

Their attack is as good as any on paper while Rikke Sevecke (Everton) and Simone Boye (Arsenal) will look to keep things tight at the back. Make no mistake, this is a brilliant squad, but can they do enough to knock one of the big boys out?

For Finland, this is going to be a rough ride. They’ve been drawn against three elite nations in the group of death and are likely to get beaten heavily in each match. They’re the biggest outsiders of the entire tournament at 250/1 - but that’s not worth wasting a penny on.

Five Group B stars to watch:

The Sportsman’s Group B predictions: