Football
News
Unai Emery's side put up a determined rearguard action, but Liverpool found a way through
Joey Mills
21:52, 27 Apr 2022

Liverpool did not quite sink The Yellow Submarine, but they put a few grave dents in the hull at Anfield tonight. Villarreal seemed content to soak up the waves of pressure that came their way, but their hopes of progressing to a first ever Champions League final took some serious damage. Purveyors of Beatles puns may be glad to hear there is a second leg of this tie, but it is difficult to see the Spanish side overturning Liverpool’s dominance at Estadio de la Cerámica.

Unai Emery set his stall out early, with his side adopting a low block and essentially inviting Liverpool onto them. It was an invitation the home team took with relish, looking to penetrate their hardy opponents from minute one. A looping Fabinho ball over the top found Andy Robertson out wide, but the full-back’s header went out of play. A sumptuous Mohamed Salah dink almost found the head of Sadio Mane, but the Senegalese star could not shape his body in time to take the chance.

The energetic Luis Diaz left ex-Tottenham Hotspur defender Juan Foyth in the dust wide on the left. The winger’s shot was kept out by Geronimo Rulli, but at this early stage it felt like a Liverpool goal was inevitable. They certainly pushed for it, as Villarreal’s forays into the home half went from rare to non-existent.

A Henderson cross-shot needed saving at the near post, and Raul Albiol got down well to block a Salah ball minutes later. Mane had a half-volley blocked by the Spain international too, before Giovanni Lo Celso got in on the act and repelled a Salah strike. The best chance of the half came from an unlikely distance, as Thiago Alcantara let rip from distance. Catching Rulli out with minimum backlift, the brilliant midfielder’s strike cannoned off the post. If it had gone in, we might have been able to close the Goal of the Tournament polls tonight. 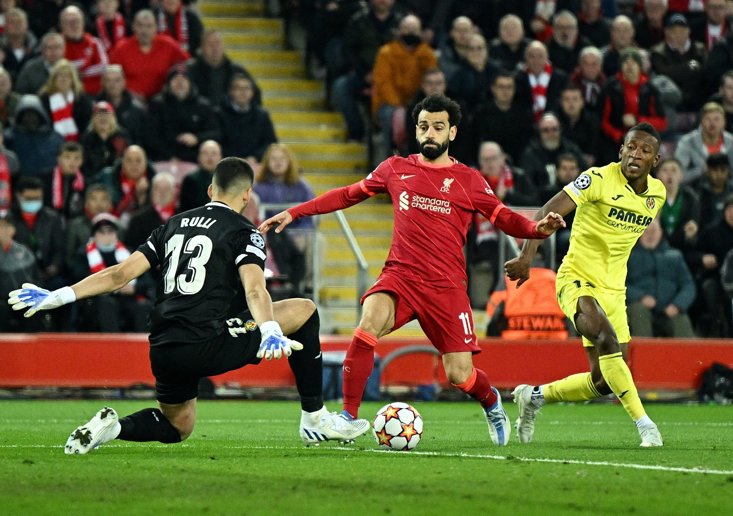 Liverpool thought they finally had their breakthrough when Fabinho netted just after the break. The linesman’s flag went up though, as an inspired offside trap had caught Virgil van Dijk out as the Dutchman headed the ball into the Brazilian’s path. Trent Alexander-Arnold took up a central position to bend a cross for Diaz, but his header went straight at Rulli.

With just eight minutes played in the half, Liverpool got the goal they had long deserved. Jordan Henderson exchanged passes with Alexander-Arnold wide on the right before sending a cross over the top. With no shortage of help from a deflection via Pervis Estupinan, the ball found its way into the net for the own goal. For a team that had been so stingy defensively, it was a bizarre and disheartening way to concede. For Liverpool, it was something they would soon build on.

Mane popped up just two minutes later, latching onto a neat through-ball from Salah and slotting home. The Egyptian star had turned his man and opened up the space, and Mane took the opportunity with calm aplomb. In the space of 120 seconds, this tie had been turned on its head.

Liverpool had the ball in the net for a fourth time, but once again fell foul of the offside trap. This time Robertson was the victim, as his fine finish from an Alexander-Arnold cross was annulled by the officials.

Villarreal made some tentative forays into Liverpool’s final third, but they could not put together any sustained attacks. The relentless pressure of the Merseyside club was always there to turn the tables back in their favour. The early tension in Liverpool’s performance had been settled by the goals, and they were able to seal the result with smart possession play.

Anything can happen in the Champions League, and we have seen comebacks from graver circumstances than a 2-0 deficit. But nothing Villarreal offered at Anfield suggested they could wreak a three-goal swing on Liverpool in Spain. Liverpool’s march towards an unprecedented quadruple looks likely to continue on.