Rangers’ 2-0 loss tonight saw them suffer the same outcome as their Old Firm rivals, but without the thrilling resistance Celtic put up in their 4-3 humdinger with Real Betis. The home side put up plenty of effort, but lacked the quality needed to beat a Lyon side more accustomed to the Champions League than the Europa League.

Steven Gerrard, leading Rangers out in Europe for the 50th time, would be forgiven for casting an envious glance at his Glasgow rivals tonight. While it must be said Real Betis look a weaker side than Lyon, it will be a cause for frustration that they could not replicate their neighbours’ spirited attacking display. In truth, Lyon barely needed to get out of first gear to leave Ibrox as 2-0 winners tonight.

The game struggled to find a rhythm early on, with neither side able to keep possession for a sustained period of time. The first real incident of the game arrived when Connor Goldson was booked for a high boot on Karl Toko Ekambi. The VAR check ruled that no red card would be shown, but Goldson can perhaps count himself lucky the footage was interpreted in that way.

Borna Barisic was Rangers’ most threatening player early on, getting forward well from his left-back slot. The Croatia international aimed to find Alfredo Morelos with a fine half-volleyed cross, but goalkeeper Anthony Lopes was equal to it. Morelos and Barisic combined again, along with Ryan Kent, shortly afterwards. The trio shared a fast exchange on the left flank, but momentum was lost when Glen Kamara chose to play the ball back to his defence. 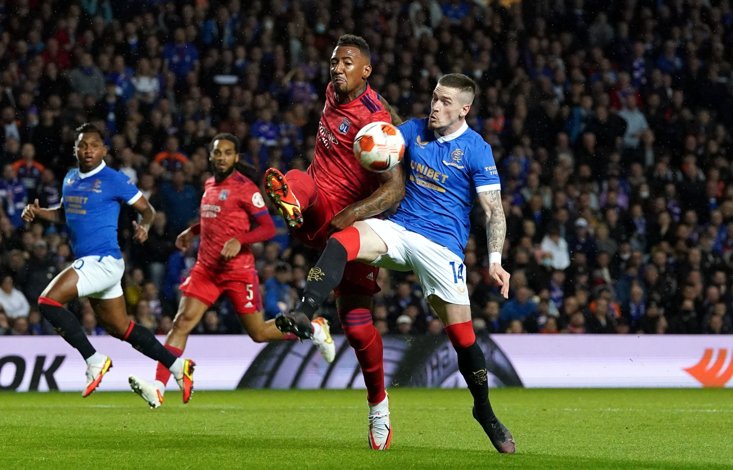 The tide of the game was turned when the energetic Kent was caught in possession in midfield, and Ekambi out-foxed John Lundstram with a step-over before launching a spectacular finish into the opposite corner of the goal from outside the box. Rangers were reinvigorated by conceding, and aimed to put some pressure on the French side. John Lundstram had a penalty claim waved away after bursting into the box, while Morelos and Joe Aribo combined well down the right before being closed down.

The ceaseless energy of Kent was the source of Rangers’ greatest inspiration. The former Liverpool chased down the ball on the left flank, and played in Morelos who squared to Lundstram. The summer signing from Sheffield United changed feet, before dragging a shot inches wide. Lyon immediately counter-punched, when Arsenal target Houssem Aouar dragged back for Malo Gusto who spurned a fine chance. The talented 18-year-old full-back is probably not who coach Peter Bosz would have chosen for this opportunity, and if the ball had fallen to one of his forwards it would have likely led to a goal.

Kent would give Rangers hope once again, latching onto a Barisic ball into the box. The lively wide man drew a fantastic save from Lopes, but will perhaps rue this miss tomorrow morning. The chance summed up the Scottish champions’ evening, lots of energy but the end product was not quite there. 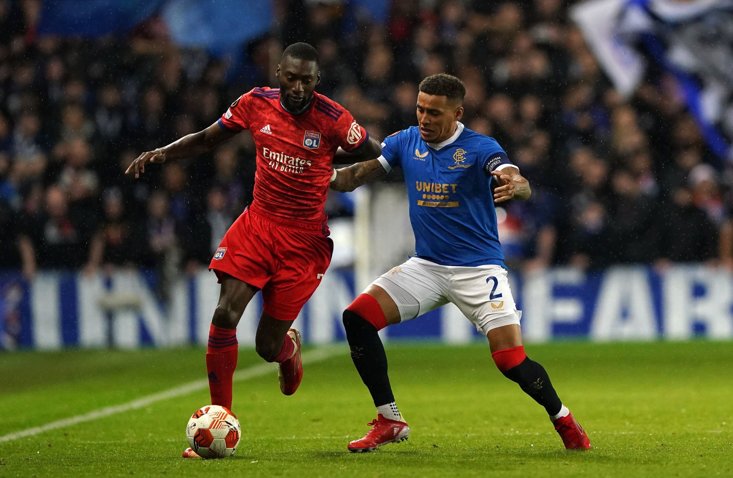 After the break, Ekambi had a warning shot deflected over, but Lyon would not have to wait long to double their advantage. Allan McGregor got down well to block an Aouar shot, but the loose ball caused chaos in the Rangers box, before falling to Islam Slimani. The former Leicester City forward’s shot was eventually deflected into the net by James Tavernier, who followed his goal at the weekend with an unfortunate second in a week, this time at the wrong end.

Rangers put up plenty of endeavour while chasing the game, but their chances became few and far between as Lyon’s class told. Tavernier nearly redeemed himself when a beautifully-struck, curling free kick ricocheted off the post. For the most part though, Gerrard’s men were frustrated by a team that is usually a fixture in the Champions League. The level of experience on show was writ large when the away side were able to call on a player of Xherdan Shaqiri’s quality from the bench. Rangers’ pain was exacerbated by Ryan Kent pulling up injured late on, being replaced by Kemar Roofe.

Rangers could not find a way back into the game, and were unable to rival the drama show Celtic put on in the same competition tonight, as the game finished 2-0. Ultimately both teams emerge with 0 points from this opening Europa League matchday. But Celtic fans could be forgiven for being a little happier with their night’s work compared to Rangers.

Rangers are 66/1 for Europa League glory, while Celtic are 80/1 with Betfred