Football
News
One of the greatest performances in the club's recent history saw them score four in Germany
Simon Lillicrap
19:42, 17 Feb 2022

It was arguably Rangers’ biggest game in a decade. It was certainly their best European performance in their recent history. Giovanni van Bronckhorst’s men stunned German giants Borussia Dortmund with a brutally clinical display that saw the Scottish champions emerge with a 4-2 lead to take into the second leg.

There may no longer be away goals, but this was a European away performance that will live long in the memory of every single Ger. Certainly those that were packed into the away end at the Westfalenstadion, a stadium celebrating its 1000th game, were truly rewarded for their loyalty.

What makes this even more satisfying for Rangers is that this wasn’t a smash and grab, or a fluke scoreline. They were completely deserving of their four goals and could have had more as Dortmund, who reached the Champions League final in 2013, were left shell shocked.

Ryan Kent was mesmeric, Alfredo Morelos was a constant threat as he bagged two goals and the defence stood up to most of the tests Marco Reus and co could throw at them. Eerling Haaland watched on from the stands on his way back from injury, and could return at Ibrox, but even he must have been stunned at the level of this Rangers performance.

From the first minute, they showed their attacking intent. The visitors took the game to their hosts and had a great chance when Borna Barisic was played in by Kent, but he saw his close range effort denied by the foot of Gregor Kobel.

Dan-Axel Zagadou missed a free header from a corner from just six yards as the hosts came into the game before Jude Bellingham cut the ball back towards Reus but the ball escaped the front man inside the Rangers box. Reus, Dortmund’s danger man, then had his effort calmly cleared off the line by Barisic, who took his time in his own six yard box to get the ball clear.

However, drama ensued at the Westfalenstadion as Rangers were awarded a penalty after Zagadou handballed. VAR stepped in to award the kick and up stepped captain James Tavernier to send the keeper the wrong way. The away team went wild as the German giants were rocked.

But things would get even better. 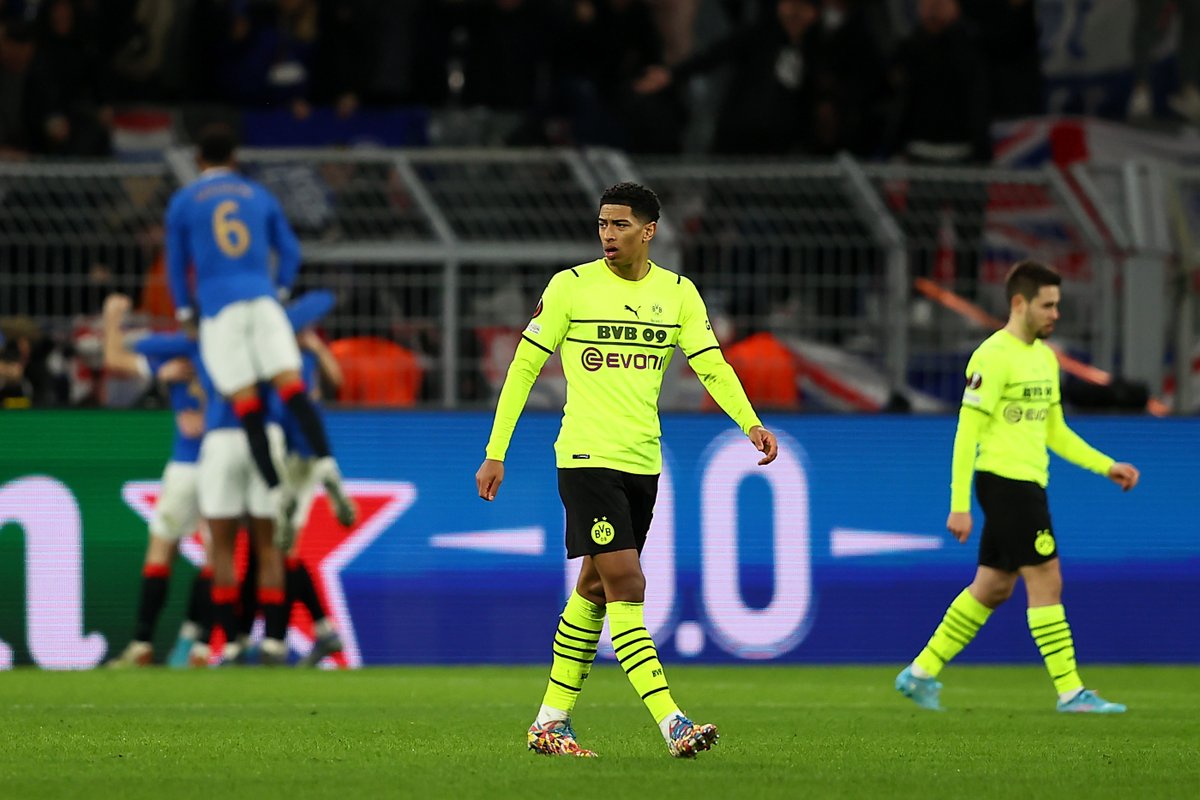 Joe Aribo flicked on from the near post from a corner moments later and Morelos was there to poke home and double Rangers’ lead within half an hour. That was his fourth goal in three games and the Scottish champions were in complete dreamland. For all of Dortmund’s quality, Van Bronckhorst’s side were able to get themselves well on top, and in three first half minutes, dominate the side many believed would win this competition.

If Dortmund expected a defensive second half performance from the visitors, what they got was another shock. Kent, spectacular throughout, ran riot down the left wing before cutting the ball back to John Lundstram who fired the ball in from the edge of the box. Dortmund were left stunned, but they would respond in rapid fashion.

None other than Englishman Bellingham would give the hosts hope as the ball fell to him on the edge of the box, and he whipped it home with his left-foot. However, Morelos wasn’t ready to let this famous win slip.

He ran onto a clever ball on the left and fired the ball towards the corner, via a slight deflection. The goal was initially ruled out for offside but VAR once again intervened to the benefit of the visitors.

On the break, Aribo then fired wide and they continued to threaten as their manager changed to a back three. But Dortmund would keep coming forward and Raphael Guerreiro struck in the final ten minutes with a sumptuous long-range effort. BVB are still well in this tie, and this was a stark reminder of their star quality.

But this was Rangers’ night. A night that will simply never be forgotten. The 17th February 2022 is now another famous date in the annals of this iconic football club.